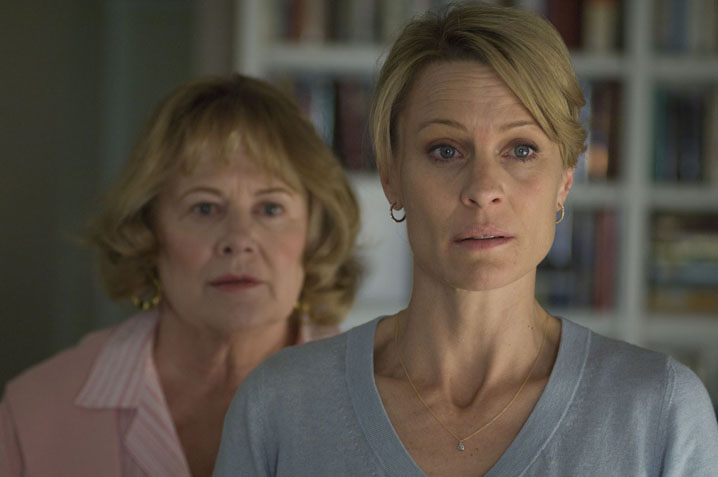 "Rebecca Lee Miller's melodrama The Private Lives of Pippa Lee - which she based on her own novel - is told from the perspective of the title character, a former free spirit who suffers a spell of sleepwalking and uses the incidents as impetus to look back at why she settled down in the first place," writes Noel Murray at the AV Club.

Robin Wright's "lack of actorly grandstanding has often relegated her to smaller roles," notes Michael Koresky at indieWIRE, "but rather than languish in supporting parts, she thrives, from her one-scene, one-shot wonder in Rodrigo Garcia's Nine Lives, in which, pregnant and dissatisfied, she comes upon an old flame in a supermarket and runs through a lifetime emotions with the merest flickers in her eyes, to the seemingly thankless estranged-wife role in Shyamalan's Unbreakable, which in a few scenes she turns into a symphony of regret and doubt. Unfortunately with Pippa Lee this most deserving of actresses has found a role in a film that doesn't deserve her."

"The temptation to attach what one thinks one knows about the personal lives of a film's creator and stars is very close to the surface with The Private Lives of Pippa Lee," writes Mark Olsen in the Los Angeles Times. "Regarding Miller - whose father is playwright Arthur Miller and husband is actor Daniel Day-Lewis - it is easy, likely too easy, to read the film as the story of finding a space for oneself while living near someone else's greatness. 'I borrowed from a lot of worlds in this film that I've seen inside of,' said Miller, cautioning against over-reading the connections between their real selves and their on-screen counterparts. 'But I think to really go down the road of biography with it is a dead end. It's really, ultimately, a work of imagination.'" 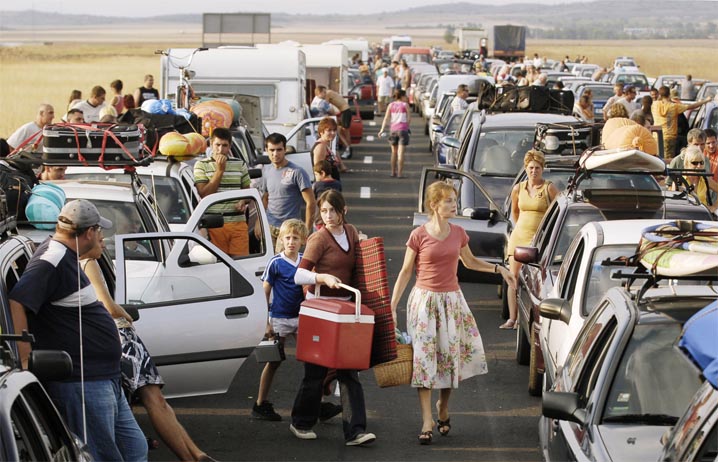 Ursula Meier "puts her characters into play so casually, with no signs of strain, that what happens in Home remains surprising and pleasurable, even when the story goes dark, then darker," writes Manohla Dargis in the New York Times. "Both the natural-sounding dialogue and Agnès Godard's camerawork seem to generate from the characters organically, which keeps them fully human. (The family isn't the only group effort: Ms Meier wrote the screenplay with Antoine Jaccoud, Raphaëlle Valbrune, Gilles Taurand and Olivier Lorelle, perhaps to catch the rhythms of five voices.) For all their idiosyncrasies, Marthe, Michel and the rest of the clan never descend into caricature. That's partly because of the very fine actors - with [Isabelle] Huppert and [Olivier] Gourmet being finer than the rest - but also because the talented Ms Meier has a particularly generous appreciation for the human comedy."

See, too, Adrian Curry's "Movie Poster of the Week." 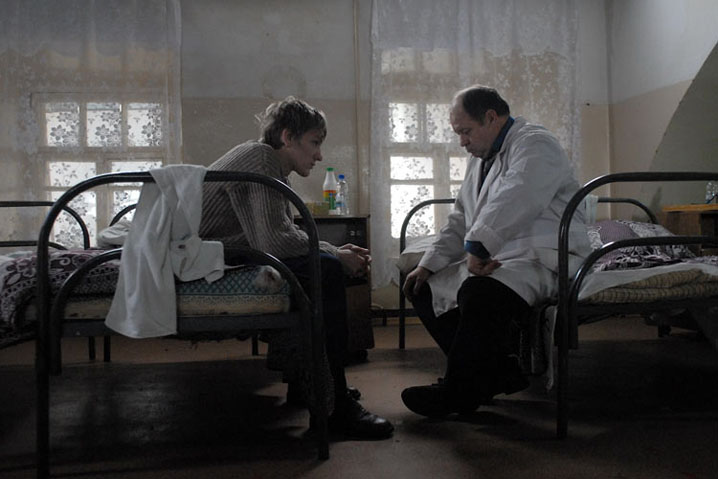 "Social misfits often harbor an irrational (except in tyrannical states) persecution phobia," writes Henry Stewart in the L Magazine, and "a free capacity for contemplation distinguishes the thoughtful types from the masses, resulting in a worry among the former that the exposure of their private heresies will result in oppression by the institutions representing the latter: Winston Smith's struggle to avoid prosecution for thoughtcrime, Randle McMurphy herded into the folds of conformity through coerced lobotomy. Ward No. 6, Russia's bleak and vigorous submission to the Academy Awards, taps into this brand of psychological apprehensiveness, of mental-as-political repression. And, as a result, it's a deeply unsettling film."

Update, 11/30: Tony Pipolo in Artforum: "[I]n addition to an appropriately dreary atmosphere and superior acting, the film has moments of unexpected poetry, even if they do not derive from Chekhov's vision."

"Simultaneously channeling Scorsese, Jarmusch and Wayans, the first-time feature director Julian Mark Kheel films each story line of his indie comedy The Brooklyn Heist in a different mode," writes Mike Hale in the NYT. "Unfortunately, the jokes are pretty much the same from story to story, and they're only mildly funny."

Mark Schilling in the Japan Times: "In his observant, if frantic, comedy Black Gaisha ni Tsutometerundaga mo Ore wa Genkai Kamo Shirenai (A Man on the Verge at a Black Company) - try saying that in one breath - Yuichi Sato descends into the underworld of 'black companies,' which provide jobs to the otherwise unemployable, but then so did the galleys of ancient Rome."

Recently updated: The entry on Me and Orson Welles and The Road; the "Best of the Decade" list tracker; Farber on Film.