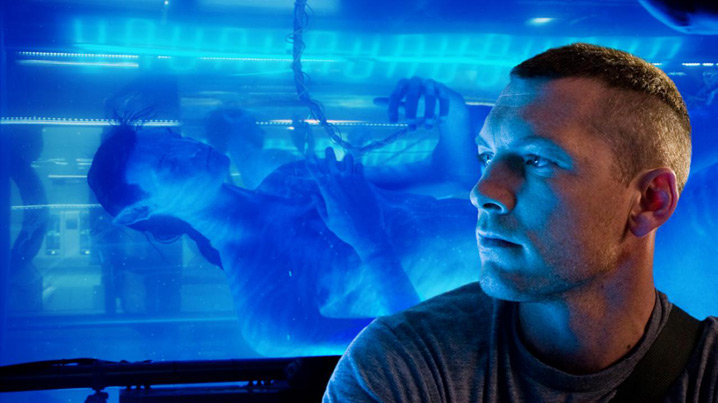 One of the things James Cameron, one of the last American action-materialists in cinema, does well, and particularly so in Avatar, is marry elements of fantasy to elements of science-fiction.  The "avatar" concept literalizes this trait of the filmmaker's body of work.  In the film, humans lay in tanning bed-like virtual reality interfaces in order to control organic bodies partially grown from the user's DNA.  That's the science.  The fantasy is that the organic bodies they somehow project senses and temporary consciousness into are that of the indigenous humanoid race that inhabits an alien planet.  While the gist of the plot concerns a Marine avatar-user being converted over from the ideology of his corporate overlords—who are on the planet to ravage a natural resource—to the ideology of the tribal naturals, this $250 million picture is more directly conceptualized around the projection of its protagonist—and in turn the audience—from a science-fiction film into a fantasy world.

If the trailers for Avatar smacked of a movie that looked like a video game cut scene—with its hyper-intensive use of computer-generated expositional imagery one only sees in cinema in rare world-creating extravaganzas like Star Wars—the shock of the movie isn't just the extent of Cameron's vision of the alien planet, but that that vision is explained in the movie as an immersive virtual experience.  Mirroring the hackneyed capitalist-tech vs. tribal-environmental battles of ideology and violence that permeates the film's textual themes, Avatar's visual experience is equally about a militaristic science-fiction movie (calling back to Aliens) being subsumed by a computer-plastic fantasy (a progression Titanic hinted at).  The battles in the film, though obviously for the most part computer generated, affects the characteristics of this meta-and-textual conflict as the metal ships attempt to move, burn, and otherwise destroy the  World of Warcraft-style environment of simulated fantasy.  This fantasy is simulated on multiple planes as well: the indigenous life is viewed as liberal projection and conjecture by the corporate-military leaders; it is a mental-sensational fantasy of the avatar-users; it is entirely computer generated for the creation of Avatar; and finally it is a programmatic simulation of a capital vs. nature action-melodrama on the part of Cameron.

Which leaves us with perhaps the most self-reflexive blockbuster in history, though this does not equate to the most self-aware.  Hailed before even seen as a film (actually a video) which will change the way films are made or films are watched or whatever, the strongest current of energy eminating from Avatar is how the video both allegorically and metonymically stages its own existence as a movie in the  real world.  I hope that whoever it was who said that films are intrinsically allegories of their own productions has lived to see the age of the CGI blockbuster, wherein Avatar’s profound absence of exterior relevant subject matter turns its focus inward, exploring the very nature of the movie's self for over two and a half hours at the cost of untold hundreds of millions of dollars.  That the end is an escape from the material world into the fantastic, the plastic, the virtual—is this the supposed future of American films?