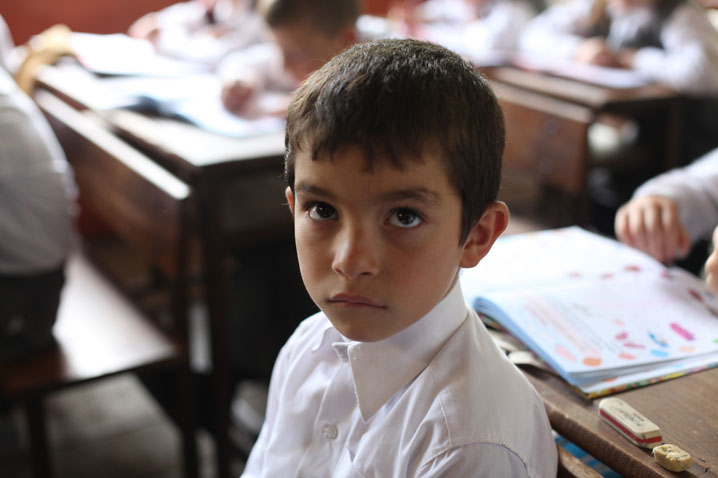 The International Jury for the 60th Berlinale, presided over by Werner Herzog, has awarded the Golden Bear to Bal (Honey), the third part of Turkish director Semih Kaplanoglu's reverse-order trilogy begun with Yumurta (Egg) and Süt (Milk).

Roman Polanski's won the Silver Bear for Best Director. The film, of course, is The Ghost Writer, and its producers have accepted in his absence.

Russia's entry, Alexei Popogrebsky's How I Ended This Summer, has cleaned up, taking a Silver Bear for Outstanding Artistic Achievement, presented by Werner Herzog himself, and both leads, Grigory Dobrygin and Sergei Puskepalis, share the Silver Bear for Best Actor.

Florin Serban's If I Want to Whistle, I Whistle, from Romania, has fared well, too, picking up the Grand Prix and the Alfred Bauer Prize.

The Silver Bear for Best Actress goes to Shinobu Terajima for her performance in Koji Wakamatsu's Caterpillar.

The Best First Feature Award goes to Babak Najafi's Sebbe from Sweden, screening in the Generation section for kids and young adults.

The awards presented tonight aren't the only ones the Berlinale hands out, of course. Weeks ago, recipients of the Berlinale Camera (Yoji Yamada, Forum founders Ulrich and Erika Gregor and the Fine Art Foundry Noack) and the Honorary Golden Bears (Hanna Schygulla and screenwriter Wolfgang Kohlhaase) were announced. Within the past few days, a slew of films from the Generation section were honored with Crystal Bears, Special Mentions and so on; the Berlinale Shorts section has its round of winners; and then dozens of films have been singled out by independent juries, audiences, etc. The festival has gathered info on all these awards-dispensing entities and their selections on one handy page.

There are reviews and roundups yet to come here in The Notebook, but for now, let's take note of a few overviews that have appeared over the past several days. For Dennis Lim, writing in the New York Times, "abundance suits this festival, which draws crowds to commercial movies and challenging experimental work alike, even in the dead of a snowy, bitterly cold winter. While Sundance and Cannes can seem at once hermetic and frenzied — somewhat surreal media happenings in resort towns crammed beyond capacity — the Berlinale takes place in an art-saturated city that comfortably accommodates eclecticism and excess."

Shane Danielsen has been kicking it up at indieWIRE, writing first on Wednesday, "People seemed weary rather than depressed, lacking the one fine film, the hot tip or ticket, that might renew their enthusiasm. It was, as one friend commented, a two-star festival, no more." Then, on Friday: "I have never met [festival director Dieter] Kosslick, but having now witnessed nine years of his programming, I feel I know him a little. And I therefore feel confident in saying that I have never seen a festival director with less idea of what constitutes a Competition selection. This year's choices are once again mostly small and inconsequential, films like Rafi Pitt's flawed, frustrating The Hunter and Semih Kaplanoglu's ponderous Honey. They lack the necessary sense of weight or significance. They're B-sides, not singles."

Cargo co-editor Ekkehard Knörer would likely agree. He's assigned a rating for each of the competing films based on a scale of 0 to 100. Four titles rank higher than 50 Cargo points — leaving 16 that don't.

Updates, 2/21: As noted below - thanks! - Eugenio Renzi's dispatches have been appearing in French and Italian at Independencia; and if you're interested in coverage in German, there are several ways into it to choose from. The main aggregators are angelaufen.de and Film-Zeit. A good read through the festival would be Perlentaucher's Berlinale blog; see their blogroll on the right for more.

Screen International's collected its reviews from Berlin here. Better look now before they go behind a pay wall in just a few days. That'll leave the Hollywood Reporter, whose Berlinale page is here, as the last of the freely accessible trades.

Meredith Brody has been sending dispatches in to Anne Thompson's place at indieWIRE.

Update, 2/22: Tim Robey blurbs and assigns letter grades to the films he caught.

Updates, 2/23: IndieWIRE gathers its coverage on one page.

Pamela Cohn presents her first wrap-up at Hammer to Nail. And here's part two. And parts three and four.