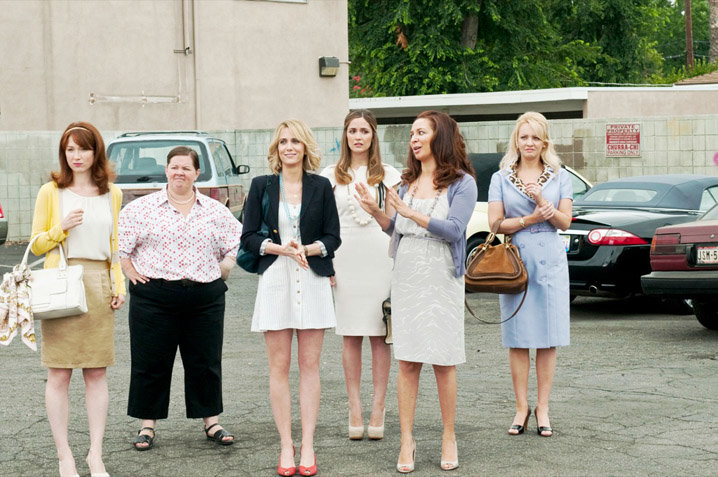 In the Margin is a new column where Ignatiy Vishnevetsky tries to make sense of the what's going on with cinema this week.

It used to be that if you wanted to learn about pacing and construction in cinema, you looked at American screen comedy. Nowadays, it's where you look if you want to learn about lopsidedness and missed opportunities.

For most of the 20th century, American comedy was distinguished by its variety of strong rhythms: bossa nova (Wilder), waltz-time (Lubitsch, Chaplin), an escalating merengue (Edwards), polka (Taurog), tango (Tashlin, early Lewis), bebop (May). Albert Brooks was maybe the last American comedy director to introduce a major innovation in terms of structure and timing: great swelling, interlocking, tinkling accumulations of neurotic comic matter that eschewed the usual one-two of a punchline in favor of a steady build-up of offhand comments. From there—somewhere around the time, in the Reagan free-market  80s, when “convention” (a creative shortcut) was replaced by “formula” (an economic guarantee)—American comedy started to pay less and less attention to construction and rhythm. Maybe it’s because, while convention provides an expectation to be played with or against, formula imposes ratios and quotas; comedy, once the ultimate domain of directors and screenwriters (Billy Wilder and I.A.L. Diamond, for example, even managed to make Jack Lemmon bearable), began to depend less on construction and more on delivery, especially on a sort of anti-virtuosic improvisation, where the comic effect lay less in how well an ad lib fit into a flow of planned activity, and more in how that flow was completely negated.

And, arguably, the shakier the framework, the stronger the disruption; by design, the films had to become shoddy (look, for example, at the "falafel hot dog" scene in Anchorman; the scripted part of the sequence is wobbly, with a portentous cutaway and a sound effect deflating what should be Paul Rudd's punchline—but the comedy is really all about the overlong semi-improvised portion that begins after the actors start laughing). The American comedies of the 1950s are some of the most impeccably-constructed films ever made; the American comedies of the late 1990s through the mid-to-late 2000s are some of the ugliest, sloppiest and most bloated (a notable exception: the kinda-sublime Ghost Town, which, unsurprisingly, wasn't directed by a comedy specialist; compare with another Ricky Gervais vehicle, The Invention of Lying, where even the humanism is half-assed).

Concurrent with the sloppiness, an explosion of improvisers: comedy casts now resemble less a chamber ensemble (as they had in Lubitsch's American films) or a band (as they had in May's), and more an open-mic jam, a consort of soloists, with the director demoted from conductor to emcee (or, in the case of Dennis Dugan, humorless yesman). So we’ve got Will Ferrell’s loopy trombone, whose main comic tricks are a rapid down slide from one octave to another and a tendency to exhaust the possibilities of a given solo, until the discomforting duration itself becomes funny; Steve Carrell’s manic, dervishy guitar-strumming, in which a chord progression is repeated until it reaches a fever pitch, sometimes involving shouting; Zach Galiafankis’ spoken word act, where most of the comedy rests in the fact that his characters speak with the confidence that a New Age piano is playing inaudibly in their heads; Adam Sandler and his one-man-band act, which involves the performer making a lot of loud and silly cymbal and kazoo noises before awkwardly doing a ukulele serenade; and Kristen Wiig, who—for reasons I can’t fully articulate—reminds me of a clarinet.

It's around here that things seem to start coming full circle. Though Adam McKay hasn't exactly evolved into a formalist, a film like The Other Guys—in comparison with Anchorman—hints at a director who has at least realized that form 1) can be funny and 2) can aid a joke. Anchorman's editing is sometimes awkward and the framings are largely indifferent; The Other Guys is brisk, with the tightly-constructed funeral fight scene probably the highwater mark of McKay's work as a director. Judd Apatow is still more of a producer than a director or screenwriter—especially on his own work—but at least that halfway turn in Funny People suggests a filmmaker with a sense of scope and scale beyond simply blowing up 80 minute movies to 2+ hours.

And, in two lengthy scenes—at an engagement party and on an airplane—Bridesmaids comes as close to an Albert Brooks film as a big-budget studio comedy can these days, though its jokes are both broader and thinner than Brooks'.  Wiig shares with Brooks a talent for naturalistic neuroticism, and an ability to construct comedy on the basis of a character (Ferrell's comedy, in comparison, deals largely with abruptly breaking with character and realism; in his affably shitty films, Sandler rarely seems to be playing anyone at all). Though as star and co-screenwriter Wiig may have a better claim to authorship here than director Paul Feig, it shouldn't be denied that part of what's funny about Bridesmaids can be traced back to his occasional attention and restraint: his deployment of cameos (Terry Crews, Jon Hamm, Matt Lucas and a perpetually mute Tim Heidecker as Maya Rudolph's groom) isn't about throwing in showstoppers, but about adding more instruments to the orchestra.

Then again, part of what isn't funny about Bridesmaids—namely an overlong scene where the leads shit and puke all over a bridal boutique (reportedly Feig and Apatow's idea)—can be traced back to the fact that his attention and restraint are only occasional, and that, as a chameleonic TV veteran, he has trouble sustaining tone. Oh, well—you can't have everything. At least it's a start.

FeigMcKayIn the Margin
7
Please login to add a new comment.