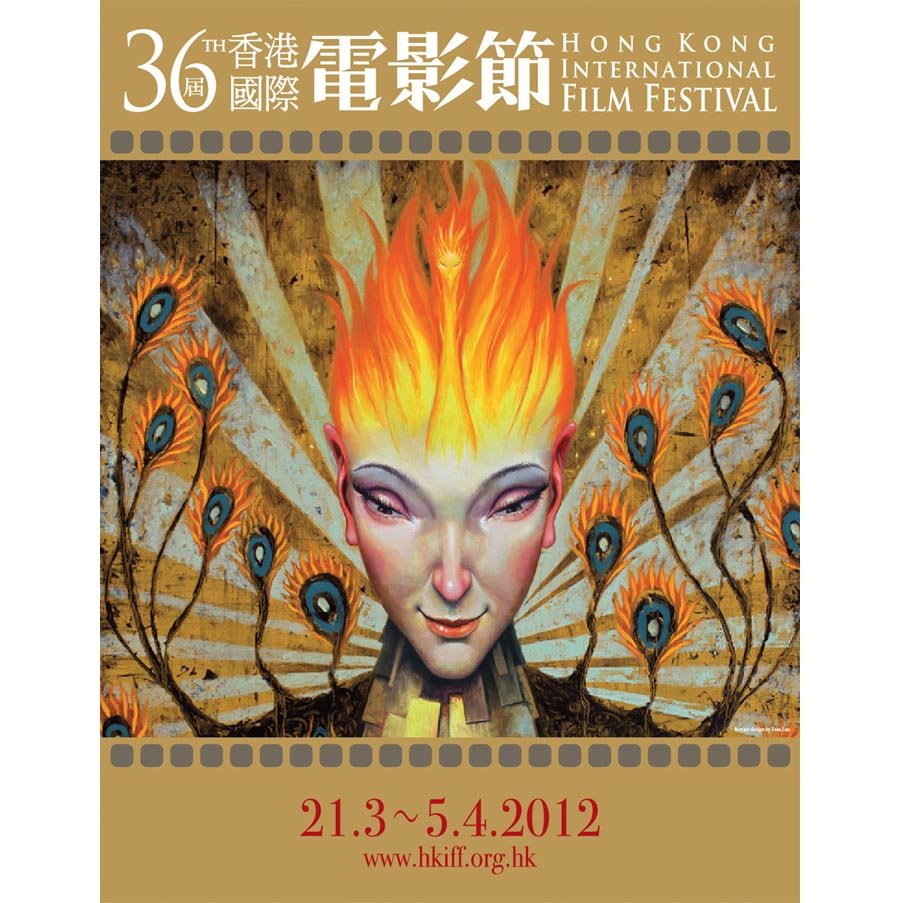 The 36th annual Hong Kong International Film Festival has opened today and will screen 283 films from 50 countries through April 4. Betsy Sharkey's there for the Los Angeles Times: "It is a time of transition for the Pearl of the Orient, a territory of 7 million that reverted from British to Chinese rule 15 years ago. Hong Kong, perhaps more than any other place outside the mainland, has felt the rise of this new superpower in its art, commerce and politics, and the many of city's movies in the three-week festival capture that dynamic. Consider the opening night film, Love in the Buff, director Pang Ho-Cheung's sardonic look at two former lovers who are part of the relatively recent reverse wave of migration — moving from the ex-colony to Beijing, where job prospects are suddenly brighter." It's a sequel to 2010's Love in a Puff. "In Life Without Principle, Johnnie To crafts an action-satire commenting on wealth-obsessed Hong Kong. And the documentary Days After n Coming looks at how an old Hong Kong village was demolished to make way for a high-speed rail link with the mainland."

"The festival's Filmmaker In Focus is Peter Chan, who will screen 12 of his films," reports the AFP. "Born in Hong Kong, Chan was raised in Thailand, studied at the University of California, Los Angeles, and now shoots in China and Hollywood (The Love Letter and Warlords). The Hong Kong Festival Society kicked off the event last weekend with a master class featuring Keanu Reeves," whose directorial debut will be Man of Tai Chi, "a martial-arts film which began production recently in China."

The festival's also hosted the Asian Film Awards, presenting the Edward Yang New Talent Award to Edwin (Postcards from the Zoo) and the Lifetime Achievement Award to Ann Hui (A Simple Life).

Chris Magee's impressed with the number of new films from Japan in the lineup, but: "What will be especially exciting for Japanese film fans at this year's HKIFF are the retrospectives." And these'll be featuring work by Yuzo Kawashima, Koreyoshi Kurahara and Takashi Ito.

In the Hollywood Reporter, Karen Chu has five questions for festival director Roger Garcia, while, in Variety, Clifford Coonan presents a guide to some of the HK film industry's key players.﻿

Updates, 3/23: In Love in a Puff, notes the LAT's Betsy Sharkey, "Cherie [Miriam Yeung] and Jimmy [Shawn Yue] meet on their smoke breaks in Hong Kong, with the chemistry fairly crackling. In Buff, the two have broken up with each other, and Hong Kong, and are in the throes of separate, but equally fraught, moves to Beijing. The packed house — there was one theater for the gala crowd and two sold-out screens for the public — was thrilled to see the couple they fell in love with two years ago back on screen…. Pang is still engaging with important themes. He's seized upon the idea of using romance as a way to weigh in on the continuing cultural changes in China, particularly the evolution of a Yuppie class with enough money and time on its hands to indulge in good old-fashioned heartbreak. But it is the playful way that Pang deals with the ripple effect of this new age with its rapidly shifting social mores — on relationships, and ways of thinking about life — that makes Love in the Buff nothing and everything to laugh about."

Also: "Poverty can take many shapes, but the singular message is that a life without hope — a poverty of the spirit — is the most devastating result of any economic travails. Two dramas playing here — Choked and People Mountain People Sea — take this matter head-on in very different ways, yet they're alike in the idea of how lives get derailed by bad times."﻿

Update, 3/24: For Betsy Sharkey, "one of the most provocative surprises" of the festival so far has been director Marlon N Rivera and screenwriter Chris Martinez's The Woman in the Septic Tank: "It takes direct aim at the film festival circuit and how the lure of awards is turning too much of indie cinema into — if you believe the movie's central metaphor — garbage. So it's no small irony that Septic Tank is in competition for the young cinema award here."﻿ 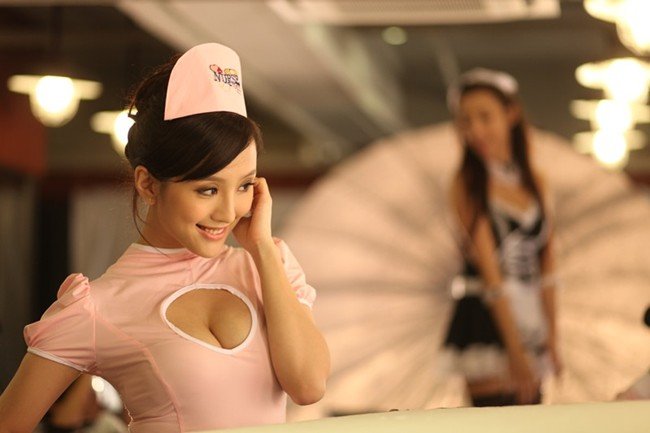 Updates, 3/26: "Pang is debuting two new films at this year's festival and the better news is that they're both great!" exclaims James Marsh at Twitch. "Unlike Buff, however, Vulgaria is a full-on Category III tirade of smutty sex jokes and incisive satire on the local film industry and Hong Kong as a whole. Chapman To stars with a donkey. What else do you need to know?" If you do want to know more, though, he's got a full review here. For the Hollywood Reporter's Deborah Young, "Vulgaria is Hong Kong comedy at its breeziest and most communicative. Even if this odyssey about a debt-ridden film producer who stoops as low as you can go to finance his next picture – a porn flick bankrolled by a gangster – it isn’t going to replace Mel Brooks's The Producers as sub-genre leader anytime soon; it’s smooth and funny enough to win its own coterie of admirers﻿."

Among the films Marsh reviews the following day is Jeon Kyu-hwan's From Seoul to Varanasi: "What begins as a low budget artsy skin flick about an affluent publisher cheating on his beautiful yet emotionally cold wife with one of his novelist clients, steadily becomes entwined, entrapped and ultimately undone by a ridiculous and wholly implausible terrorist plot. The location footage shot on the streets of Varanasi is rather effective and true to the spirit of the city, but the story used to take these dull and emotionless characters out there is as stupid as it is implausible. Not so much a disappointment as a chore."

Betsy Sharkey on Lovely Man: "This provocative and powerful film, part of the indie showcase here, is a father-daughter story unlike any you've seen. She's 19, a devout Muslim, hoping to reconnect with the father who abandoned her and her mother when she was 4. He's a fixture in the Taman Lawang area in Jakarta, Indonesia's capital, where transvestite hookers ply their trade in the midnight hours. Both father (Donny Damara) and daughter (Raihaanun) are at turning points in their own personal crises. There is a lot to be sorted out in writer/director Teddy Soeriaatmadja's sixth film. The indie director has been making movies steadily since 2005. But Lovely Man may be the one that finally puts him on the international map; it has certainly emerged as one of the hot tickets in Hong Kong."﻿

Update, 3/27: Peng Zou's Sauna on Moon "uses a fragmented narrative to tell the story of the myriad beautiful women who work in a Guanzhou massage parlor," writes James Marsh at Twitch. "Situated in Zhuhai, just over the border from the gambling Mecca of Macau, the sauna must constantly adapt and change its business model to draw in the punters in a ferociously competitive marketplace. Refreshingly free of any gangland cliches or conceits, Peng's technique is almost fly-on-the-wall in the way it steps back from these sex workers and their firm but fair managers, to observe rather than judge their lives, troubles and dreams for the future."﻿

Updates, 4/8: Betsy Sharkey in the LAT: "It seems like hardly a week goes by without some story in the Hollywood trade publications about this US studio or that setting up shop in China, or doing deals here, the better to mine its fast-growing, multibillion-dollar market. But such headlines rarely capture the thoughtful and savvy ways Chinese are adapting the Hollywood system to expand and refine their own industry, and the desire for more artistic and cultural freedom that is the subtext flowing through their conversations, and increasingly, their art. I was struck by how American entertainment was such a tangible part of ordinary life."

"Being a huge fan of [Hitoshi] Matsumoto's previous films, Big Man Japan and the deliriously sublime Symbol, I have been waiting impatiently for his third film for what seems like an eternity," writes James Marsh at Twitch. "Scabbard Samurai is satisfying, if not quite up to the incredibly high standards of the director's previous effort."

Deborah Young in the Hollywood Reporter: "Feel-good family fare as simple and genuine as the bread the young Japanese heroine and her husband bake at their remote roadside café, Bread of Happiness squeaks past the banality of its childish music and guileless sentiments to address serious issues like heart-break, a broken home, a childless marriage and even encroaching death in terms children can understand without being afraid. Writer/director Yukiko Mishima, who comes from television work, has the delicate touch of a Japanese painter working humbly on the details.  It's about as far from her erotically edged debut feature The Tattoer as you can get."﻿

Updates, 4/12: The Hollywood Reporter posts an overview of its coverage.