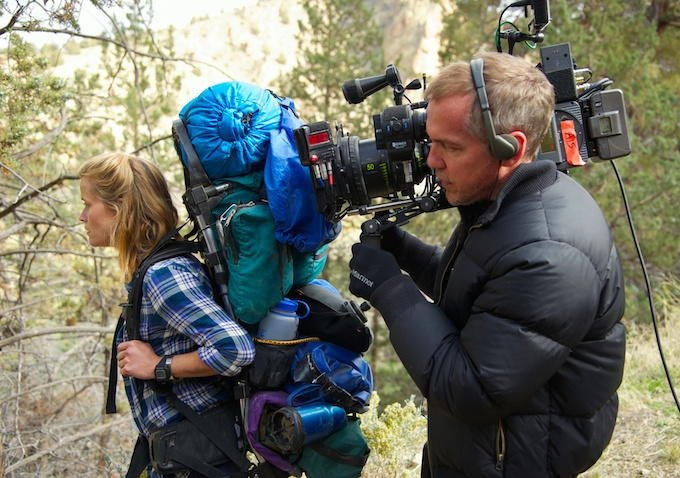 Jean-Marc Vallée’s eighth feature film Wild is just about to begin its theatrical release in North America. The film stars Reese Witherspoon, who plays Cheryl Strayed as she goes on an incredible, though unprepared, hike across the Pacific Crest Trail to morn the death of her mother. This new release provides a great opportunity to reflect on the director’s career and survey the literature surrounding him.

Even though I’m sympathetic to Barry Hertz’s article in Maclean’s, "Jean-Marc Vallée: Film’s redemption man" (Sept. 15, 2014), for acknowledging the director’s talent and growing international reputation, it still doesn’t do Vallée justice as it concludes with vague generalizations that, instead of enlightening, overlook his actual merits. Hertz overemphasizes Vallée’s work with actors and argues that he ‘lacks’ a unique style of directing, criticizes him for his modesty, and then limits his merits in terms of Academy Award recognition. This line of thinking directs the Vallée conversation towards the industry and less towards the more important one of the personal, artistic and relation to film history.

As Vallée’s producer Nathan Ross recently told the Los Angeles Times, “he feels most comfortable when he's off with his actors in some remote place." It is this personal impetus to create, explore and engage with life and the world that is at the root of Vallée’s cinema. Everything else is a distraction.

The director has dealt with the maternal bond in C.R.A.Z.Y. (2005), The Young Victoria (2009), and Café de Flore (2011; though differently, since it’s from the mother’s perspective), but it’s with Wild that for the first time he’s explicitly dealing with the loss of one. This orphan premise was already there in Dallas Buyers Club (2013) as Ron Woodroof makes sure to hold on to his mother’s painting. This mournful gesture is deeply rooted in the personal for Vallée, as he acknowledged it came from his own feelings about his mother’s recent death due to cancer.

All the way back to C.R.A.Z.Y. (which Vallée partly financed) and Café de flore his cinema has been deeply rooted in autobiographical content (both films even have significant cameos by Vallée himself). It’s this desire to share how he feels and to find something universal in the personal, while also looking towards others and trying to say something meaningful about the world, which makes Vallée such an important director. This small-scale, character driven quality to his films is in opposition to the logic commercial blockbusters.

Jason Anderson in Men’s Fashion writes, "In fact, he could be regarded as the archetype of a new vanguard of Quebec talents enjoying international reputations." This is clear as Vallée seems to be at the forefront of new renaissance in Québécois cinema, which includes directors as varied as Denis Côté, Rafaël Ouellet, Chloé Robichaud, and Stéphane Lafleur. Vallée in specific owes a lot to one of the overlooked masters of Québécois cinema, Gilles Carle, who was one of the most formally adventurous and emotive directors to emerge in the Sixties. C.R.A.Z.Y., for example, owes a lot to Carle’s La vie heureuse de Léopold Z (1965) with their shared Christmas setting and ironic gazes on the foibles of their idiosyncratic characters, and Wild owes a lot to La Tête de Normande St-Onge (1975) with their shared fragile female protagonist who after extreme events have to leave the city and go to nature to find themselves.

But to really get Vallée is to study his advertising commercial work as a way to identify how to define his personal stamp and to properly evaluate these ‘miniature’ achievements. These works that were made with Cinélande and Iron Hill productions include commercials for the Dairy Farmers of Canada, Allianz insurance, the SAQ and LCBO, Loto-Québec, the Royal Bank and Leucan. These commercials, which range from thirty seconds to a minute, offer a short form for Vallée to focus on what’s essential: childhood, strong emotional moments, deep family bonds, and idiosyncratic characters. The commercials use of popular Québécois songs is especially striking too. The commercials play like variations, or extensions, of Vallée’s film work. I’m not arguing that all of these commercial are necessarily great, but, if Claudia Hébert in her CinéTFO interview is correct in that Vallée is chronicling our century, with films set in every decade since the Sixties, than these small advertisements, which, most of them being made for government agencies, are a highlight of some of its constitutive products and how people use them. Here Vallée acknowledges the changing material world and the growing presence of products and services while still trying to provide an outreached sympathetic hand to the Québécois population. Especially good are the commercials for Leucan of a boy returning to reassuring classroom after going through chemotherapy, a LCBO-MADD prevention spot soundtracked by Bobby Vinton’s "Mr. Lonely," and the Volkswagen ad where a man quits his job to go exploring in his new vehicle through the rough countryside.

If Vallée stands out it’s not necessarily for being Québécois but for his universal appeal. C.R.A.Z.Y. was initially supposed to be filmed in the United States—Vallée wanted it to look like the Boston of Good Will Hunting, though, which was actually filmed in Toronto—but Michel Côté, who he worked with on his first film Liste noir (1995), convinced Vallée ﻿to make it Québécois specific. Yet it’s Zachary Beaulieu’s more general coming of age story, which is set within a repressive household, that makes the story so identifiable. Vallée’s use of music also contributes to his universal appeal due the songs’ strong emotional force and their international recognition. This was at first a double-edged sword since it led to difficulty getting foreign distribution due to problems acquiring legal rights to the music. Now that Vallée is working with bigger budgets he has no problem acquiring the songs that he wants. For example, in his liner notes to the Wild soundtrack, which he curated, he explains what he was trying to convey with the music. There is also fascinating conversation about the tracks he’s going to include in his next film, Demolition, in the new Charlie Schmidlin interview at The Playlist. Vallée’s interest in music seems like it will culminate with his recently announced next project Get It While You Can, a biopic about Janis Joplin starring Amy Adams.

If I’m so adamant about Vallée it’s partly due to a blindness toward him, and more generally to a representative Canadian cinema, from a certain branch of French film criticism. In France, small one-off screenings excluded, Canadian cinema is what plays at Cannes. The curating of this is partly dictated by the directors who receive the most government subventions and usually are older, more comfortable and less apt to fight in their careers. This is a film history dictated by the logistics of commercialism and the market. What about more independent films that are of potential higher artistic quality? I’m thinking in specific to some Toronto D.I.Y. directors like Kazik Radwanski, Calvin Thomas and Yonah Lewis, Matt Johnson, Igor Drljača and others that would be well worth exploring. It wouldn’t be too hard to organize a survey or travel piece.

I still stand by my review of the film at Cinema Scope which says that Wild isn’t perfect but interesting. To be honest, Nick Hornby’s screenplay uses many clichés, Reese Witherspoon is not always convincing, and Cheryl Strayed’s book is better than the film. But what’s great is how Witherspoon is using the film, and discusses it, as an object to bring systematic change in Hollywood to create stronger and more complex female characters. And as a producer-star, and based on a book by Cheryl Strayed, who is at the height of her career, one gets a sense that Vallée was working within certain restrictions such that, for example, there isn’t as much poetic license as in Dallas Buyers Club. One also gets a sense that Vallée couldn’t push Witherspoon as far as Matthew McConaughey was willing to go (just see McConaughey as an auteur in his work in True Detective and Interstellar to see his limits). But it goes without saying that Wild is in no way Vallée’s worst film, that honor will always go to Posse II: Los Locos.

Vallée, in his interview with Marc-André Lussier, says that he edited Wild without any sound, and along with the great Yves Bélanger as the director of photography, the film is one of Vallée’s most expressive films—it recalls a Vincent van Gogh painting. It is this work on the image that is outstanding. It’s worth remembering that prior to the production of Wild that Vallée spoke of wanting to make a science-fiction film and that after Dallas Buyers Club was nominated for an Oscar for editing that there was a Twitter correspondence between its editor Martin Pensa and the editor of Gravity, Mark Sanger. With this in mind it’s easy to see how Reese Witherspoon’s fight for the bare necessities of her existence, humanity and redemption recalls the extreme conditions of recent outer space survival films.

Vallée’s next film Demolition is already in post-production and then he will go on to Get It While You Can, a Captain John Franklin biopic, a French film, and then a return to Quebec for an extension to his earlier short films, Les fleurs magiques and Les mots magiques. The future is his.﻿