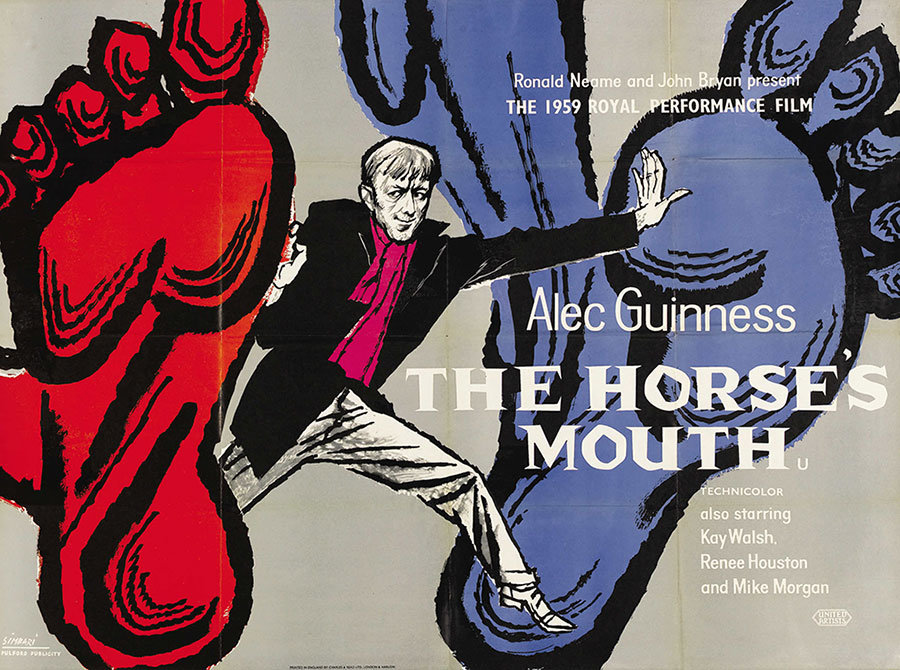 Though it is used (cropped and not as colorful) on the cover of Criterion Collection’s DVD, I hadn’t seen this fabulous UK quad poster for Ronald Neame’s The Horse’s Mouth until recently when I read about a wonderful discovery in a London tube station. Four years ago, workers at the Notting Hill underground station discovered a passageway that had been sealed off half a century earlier when the station had converted from elevators to escalators. Left behind in the sealed tunnel was a time capsule of late 50s graphic art in the form of movie posters and advertisements left more or less intact. 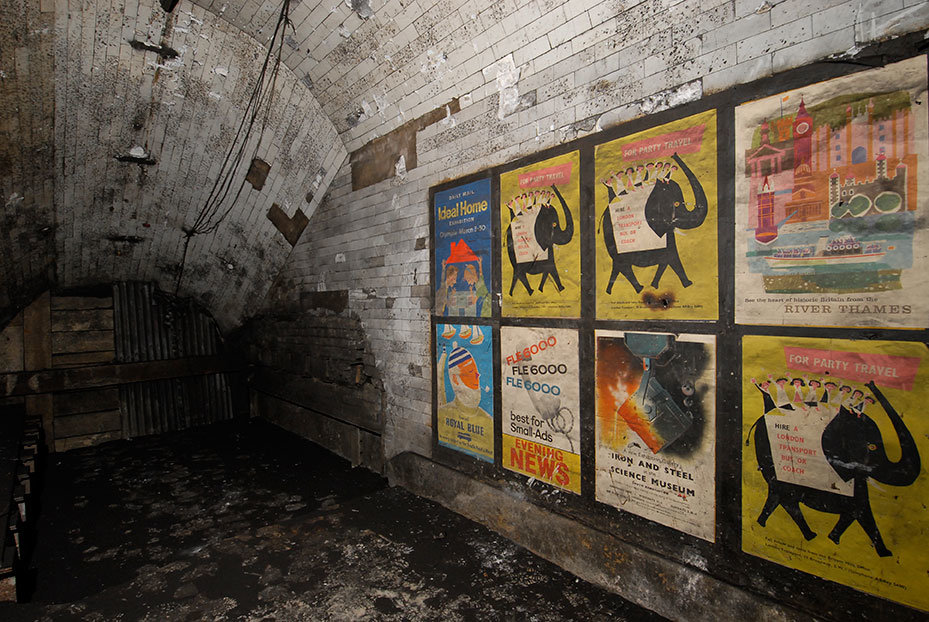 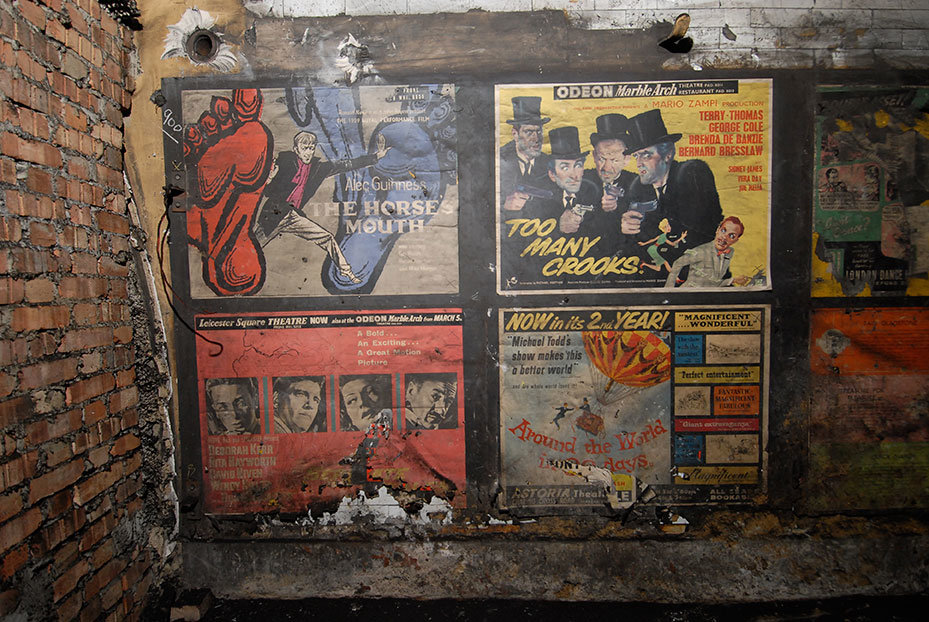 This is the kind of thing I dream about (you can see more photos here). The sealing of the tunnel can be roughly dated by the release dates of the four films advertised. The Horse’s Mouth came out in the US in November 1958, but its hometown release had been delayed for the Royal Command Film Performance on Feb 2, 1959. As its poster declares, Around the World in 80 Days, released in the US in 1956 and in the UK on July 3, 1957, was into its 2nd smash year in theaters.﻿ Separate Tables, an American drama set in the British seaside town of Bournemouth, was released in the US on December 18, 1958 (IMDb has no UK release date), while Too Many Crooks, a British comedy caper directed by Mario Zampi, was released in the UK on March 8 1959. The tunnel was probably sealed up not long after that. (Since the discovery, the tunnel has been re-sealed to preserve the posters for posterity or until London Transport can figure out what to do with them).

The Horse’s Mouth is a film about a painter and two real-life painters are involved in its story. Alec Guinness adapted the 1944 novel by Joyce Cary (and was nominated for an Oscar for his script) who had based his dissolute artist anti-hero on his friend Dylan Thomas. In the film the paintings that we see Guinness’s character working on were all painted by John Bratby (1928-1992), a British artist known as a founder of the Kitchen Sink school of realist painting.

Bratby’s work was not used for the poster, however, which was instead designed by another painter of a very different style and provenance. Whereas Bratby was known at the time for his scenes of drab domesticity, Nicola Simbari (1927-2012) was an Italian painter who grew up on the Mediterranean and whose work is a riot of color, light and energy. Simbari painted the sea and flowers while Bratby, at the time, painted toilets and actual kitchen sinks. Though based in Rome, Simbari had his first one-man show in London in 1957 and somehow ended up designing posters for UK film companies. His signature can be clearly seen in the bottom left corner﻿ of the Horse’s Mouth poster, but I was surprised to discover on the website run by his wife Elfrida, that the Too Many Crooks poster discovered in Notting Hill was also apparently the work of Simbari. 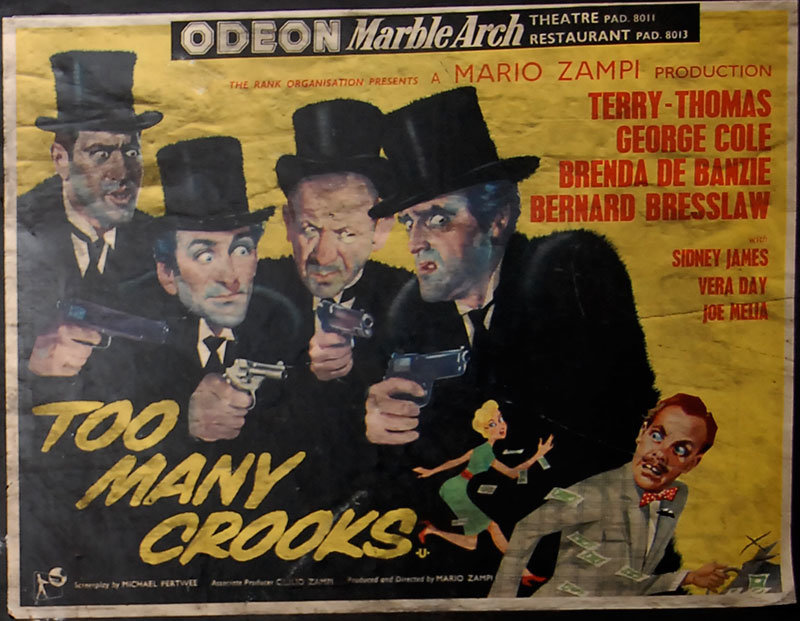 I’ve found a couple of other Simbari film posters from the same period, a superb US one sheet for Stanley Kramer’s nuclear holocaust drama On the Beach (1959) and a similarly hued UK quad for a documentary film about The Royal Ballet (1960). 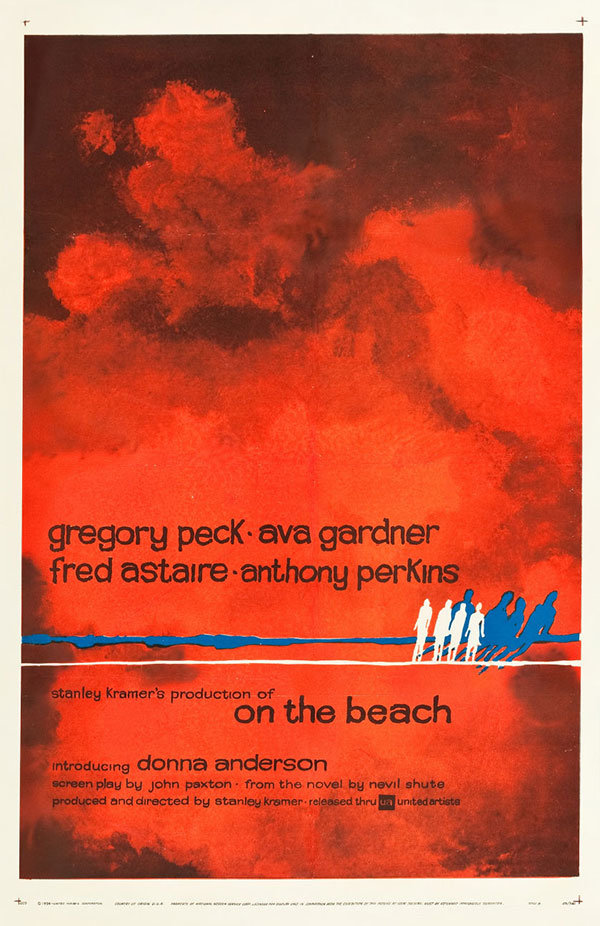 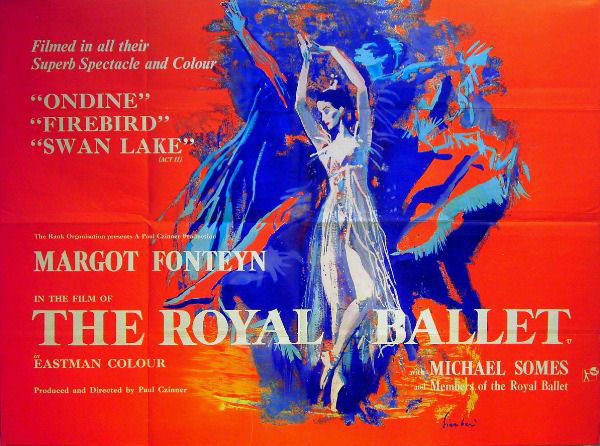 ﻿I could not find identical UK quad posters for the other films discovered in Notting Hill, but here are some alternative, and quite different, posters for the same films. 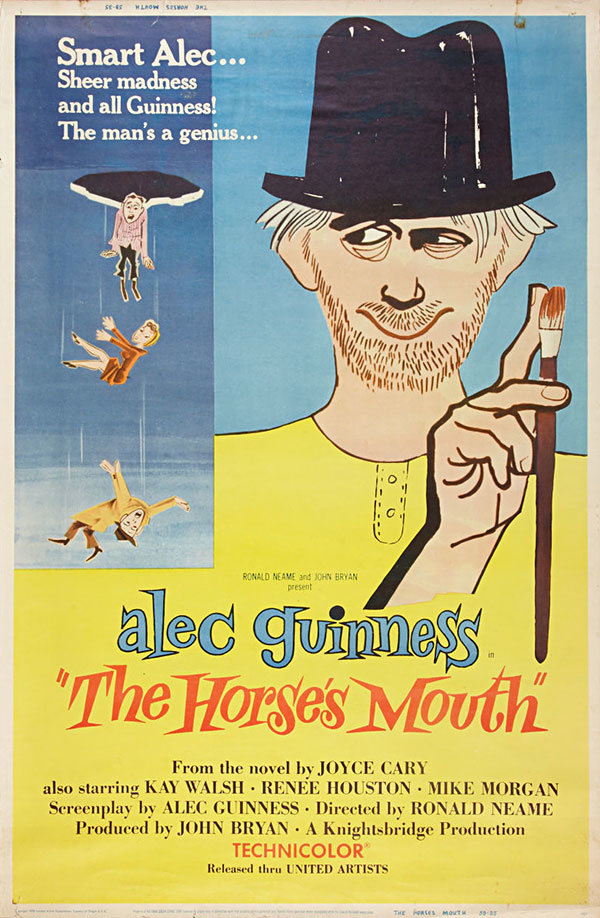 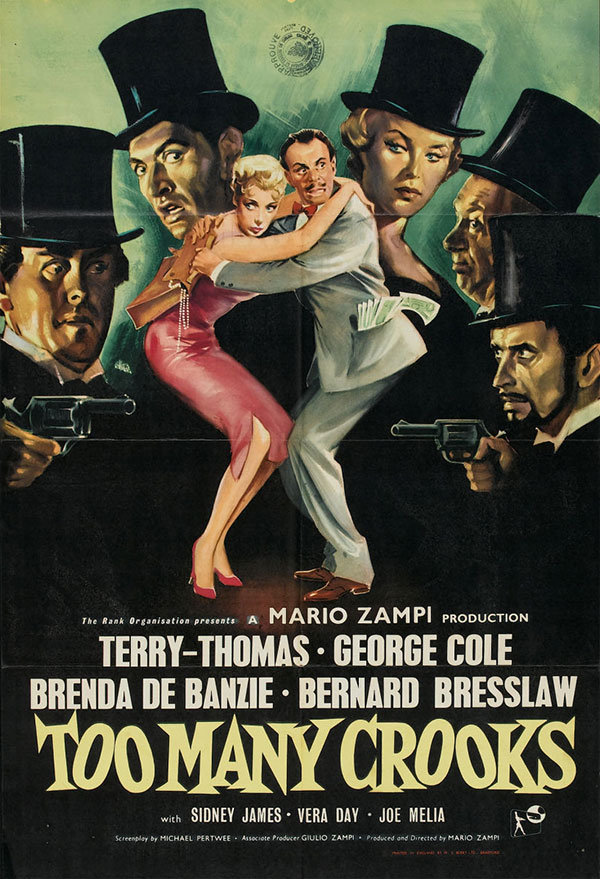 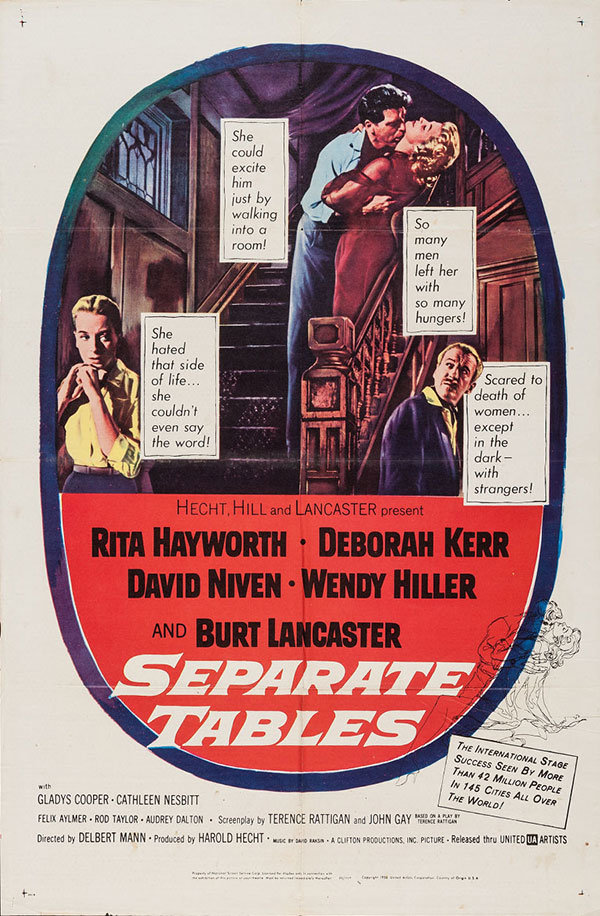 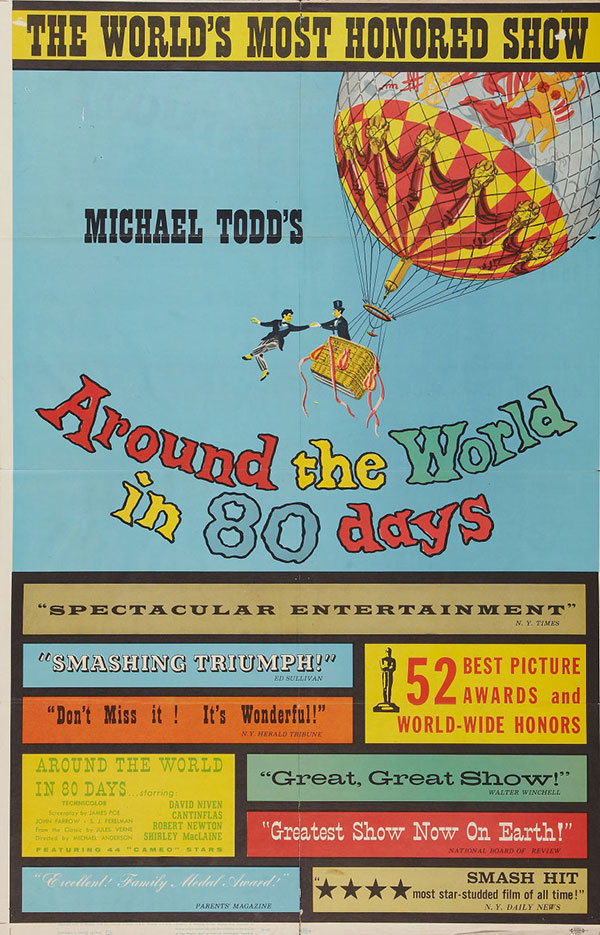 You can read the original 2010 news story on the Notting Hill discovery here, and even see some video here. Posters courtesy of Heritage Auctions and photos courtesy of London Underground.