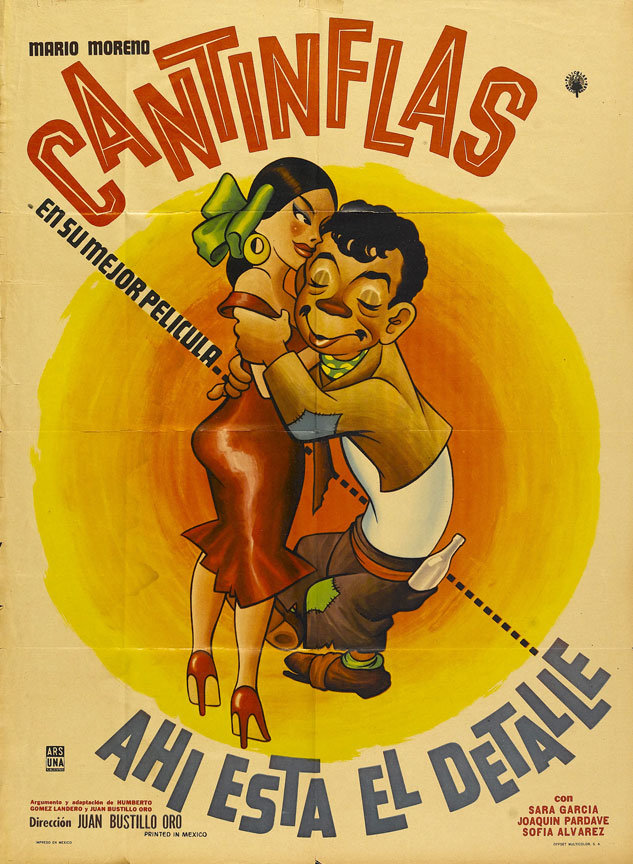 The 100th anniversary of the birth of the great Mexican clown Cantinflas passed unremarked on Notebook, and would have been unnoticed by me had I not been in Costa Rica two weeks ago and come across a pull-out section of the newspaper La Nación dedicated to "Su excelencia del cine latino." But what caught my eye was not Cantinflas himself (outside of Around the World in 80 Days I’ve never seen a Cantinflas film) but an impressively intricate and beautifully conceived infographic at the end of the article, the like of which I don't think I've ever seen for any actor or filmmaker's filmography anywhere.

Born on August 12, 1911, Fortino Mario Alfonso Moreno Reyes, better known as Mario Moreno, best known as Cantinflas, was one of the biggest stars in Spanish-language cinema, but, despite winning a Golden Globe for Around the World in 80 Days in 1956 and being hailed by Chaplin as the "world's greatest comedian," he is little known in North America. Yet from 1936 until 1981 he made over 50 movies and is one of the most iconic figures in Mexico and much of Latin America (he died in 1993 at the age of 81). A champion of the underdog in life—his political and charity work made him a working class hero—Moreno started out playing a little tramp character similar to Chaplin's and pioneered the sagging pants look long before hip-hop.﻿ In the weeks leading up to his centenary, his films were revived in Mexico in theaters and on television, posters for his films were displayed along Mexico City's main thoroughfare and, best of all, snippets of soundtracks from his performances were piped into the city's subway (imagine that happening in New York for anyone?). The latter is fitting because Cantinflas's comedy depended mostly on speech, a garbled torrent of inventive double-speak which he employed to get out of trouble or speak truth to power and which spawned the verb "cantinflear" which means roughly to talk a lot while saying nothing. Of course, his mostly verbal humor never really translated successfully to a non-Spanish speaking audience.

Documenting all of Cantinflas's 51 movies in what looks like a color wheel, the Nación infographic (designed by Manuel Canales, Marco Hernández and Carlos Fonseca, with text by Ana Yancy Flores) subdivides his body of work into various sections. As best I can divine (not being a Spanish speaker) the outer wheel divides his films between the early films in which he played characters who spoke in a "popular" voice and the later films in which he spoke in a "cultivated" voice. The second wheel documents the country of production (though almost all his films were made in Mexico, with two international productions and one co-production) and the wheel inside that denotes the "academic level" of his characters, whether professional or non-professional. Within that, the inner wheel notes the number of times he played a character called Cantinflas.  The one thing I can't work out is why some of the films are in red and the others in black. If anyone figures that out (click on the graphic for a much larger version) please let me know in the comments below. The wheel also denotes, with a pencil symbol, which films were written by Moreno himself, and also which performances received or were nominated for a Golden Globe (of which there are two). 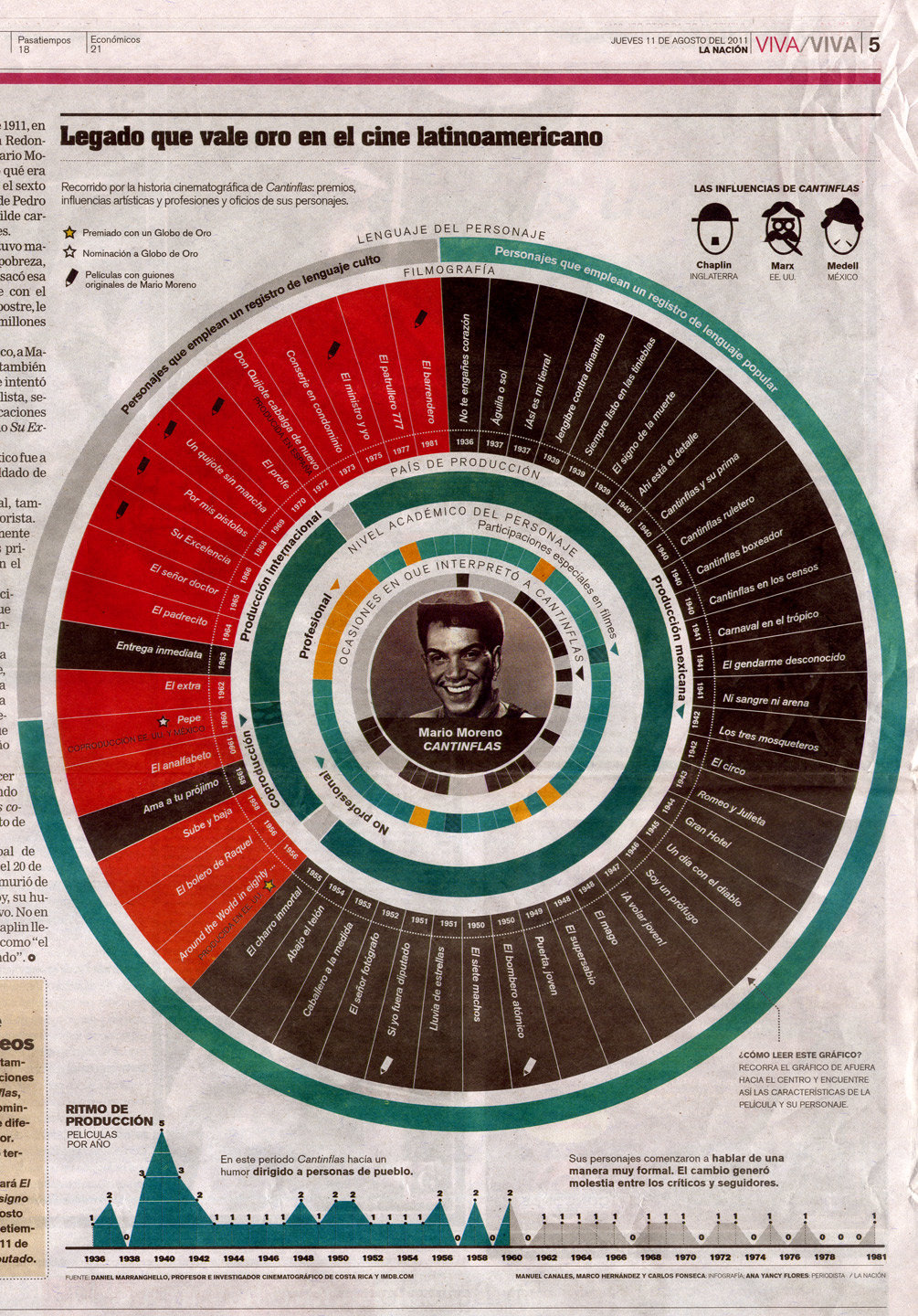 In addition to the wheel there is a histogram at the bottom tallying the number of films Cantinflas made each year of his career, which again divides his work into early films which had "a humor directed to people of the pueblo" and his later films in which his characters "spoke in a more formal manner," a change which "troubled a lot of his critics and followers" (there’s obviously a theme here). But my favorite part of the whole thing is this graphic of his influences which indirectly indicates the importance of mustaches in early comedy. Catinflas's mustache—probably modeled on that of Manuel Medel (misspelled in the graphic) who was just five years older than Cantinflas and a co-star in some of his early films—was his trademark. According to E. Eduardo Castillo of the Associated Press, he "purposely shaved his normally full mustache to imitate the sparse growth of the 'peladitos,' the underclass Mexican laborers barely able to grow facial hair because of their Indian heritage." 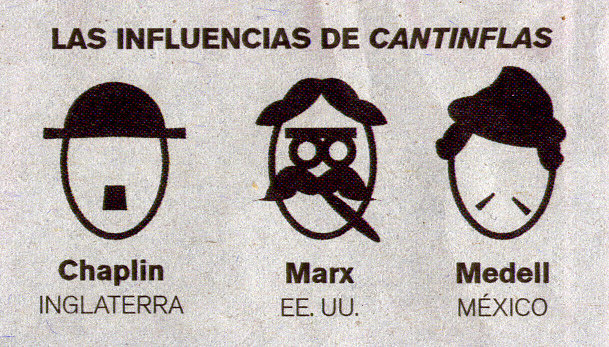 The posters for Cantinflas's films are a mixed bag. As with the great tradition of Mexican movie posters (beautifully documented in the sadly out of print Chronicle books Cine Mexicano: Posters from the Golden Age 1936-1956 and Mas! Cine Mexicano: Sensational Mexican Movie Posters 1957-1990) they are all illustrated, even in the 70s when photography had started to take over in the U.S. And as with most comic Mexican films, Cantinflas is almost always represented in caricature. (According to Mas! Cine Mexicano all of his posters from 1940 to 1981 were drawn by Juan Manuel Guillén, though the style seems wildly different from one to another so some of the below may be posters from other Spanish-speaking countries). The broad style is not much to my taste and often verging on kitsch, to say the least, but since Cantinflas was a name-above-the-title star if ever there was one, one of the interests of his posters lies in the varied graphic renderings of his name.

The poster at the top of the page is for Ahí está el detalle (You're Missing the Point), 1940, which was the film that made Cantinflas a star and whose title gave him one of his most famous catchphrases. Below is a selection of posters running consecutively through his career. 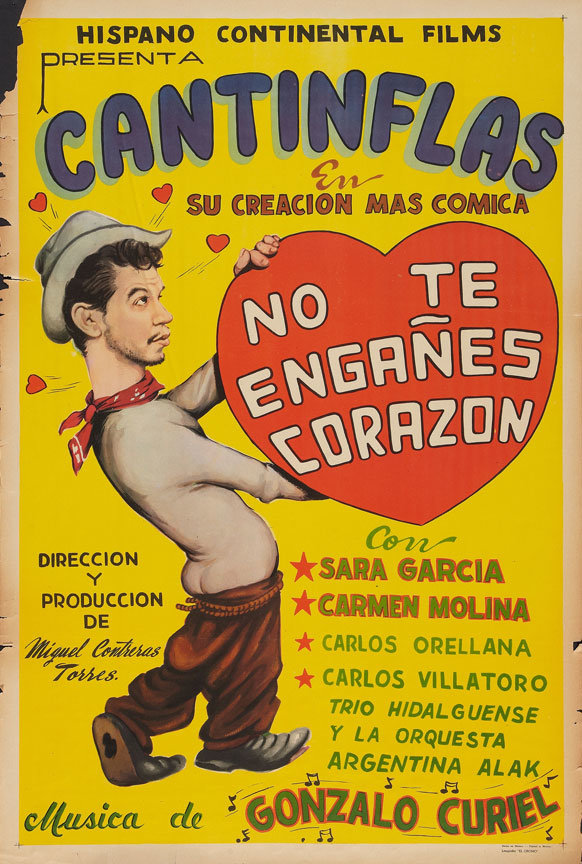 No te enganes corazón (Don’t Fool Yourself Dear), 1937, his first film. The poster was undoubtedly for a re-release of the film once he had made his name. 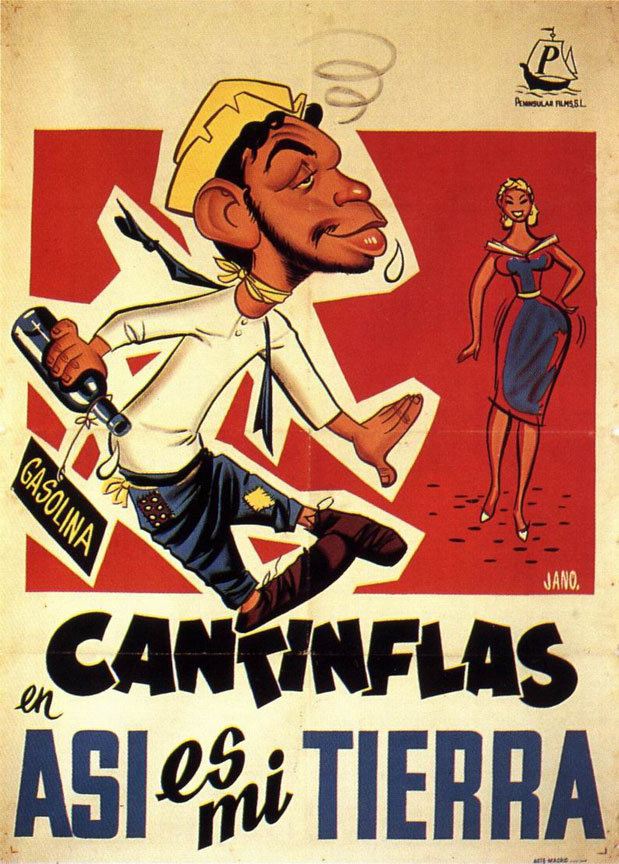 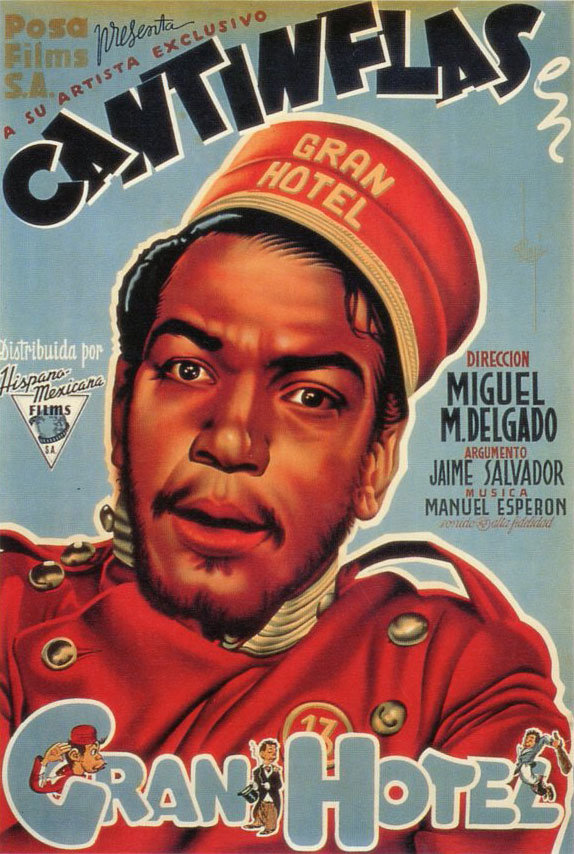 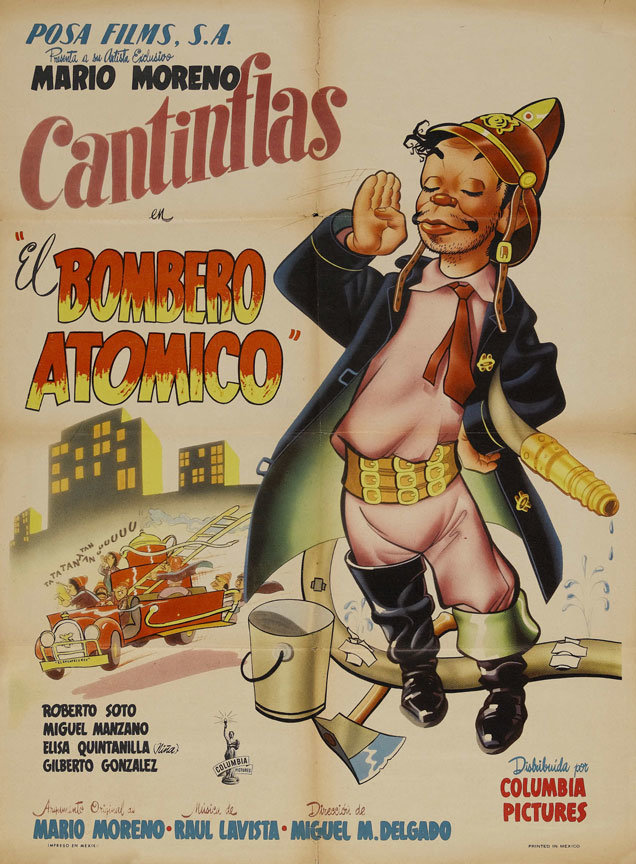 El bombero atómico, 1950, the first film based on an original script by Moreno. Note the Columbia Pictures credit; Moreno signed with Columbia in 1946 and the company still makes up to $4 million a year on his pictures. A clip from El bombero atómico﻿ can be seen here. 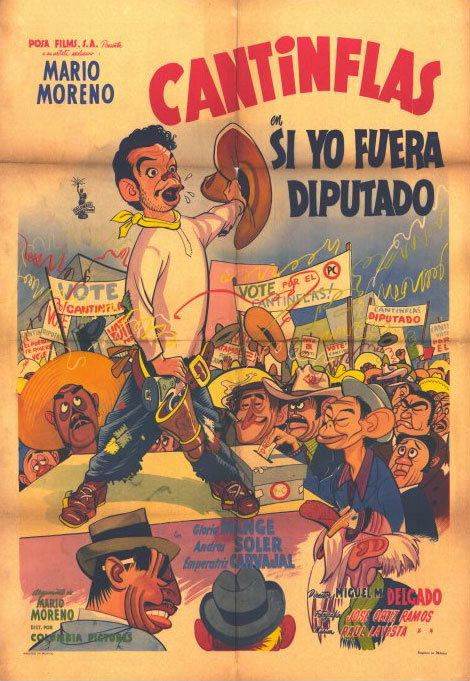 Si yo fuera diputado, 1951, also based on a story by Moreno. 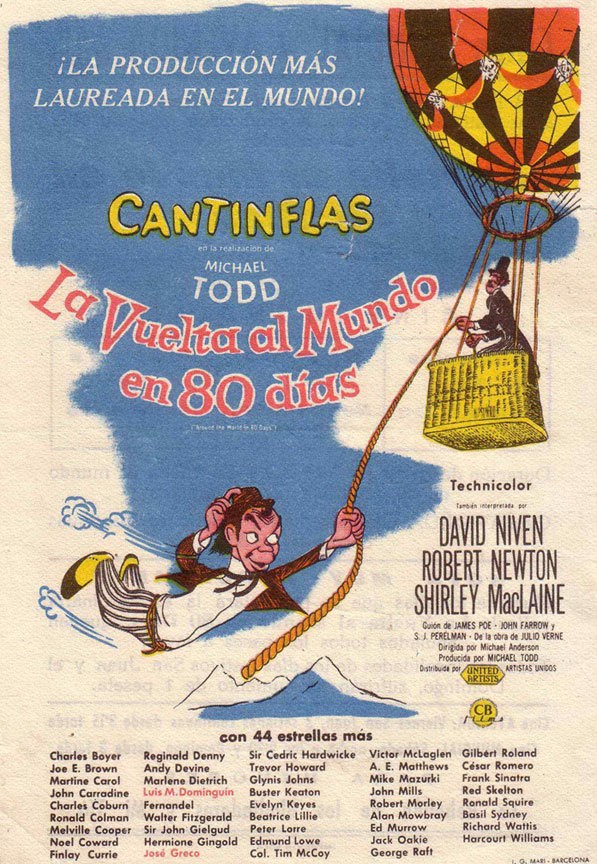 A Spanish ad for Around the World in 80 Days, 1956, which portrays it as a Cantinflas vehicle (when in reality he played second fiddle to David Niven). 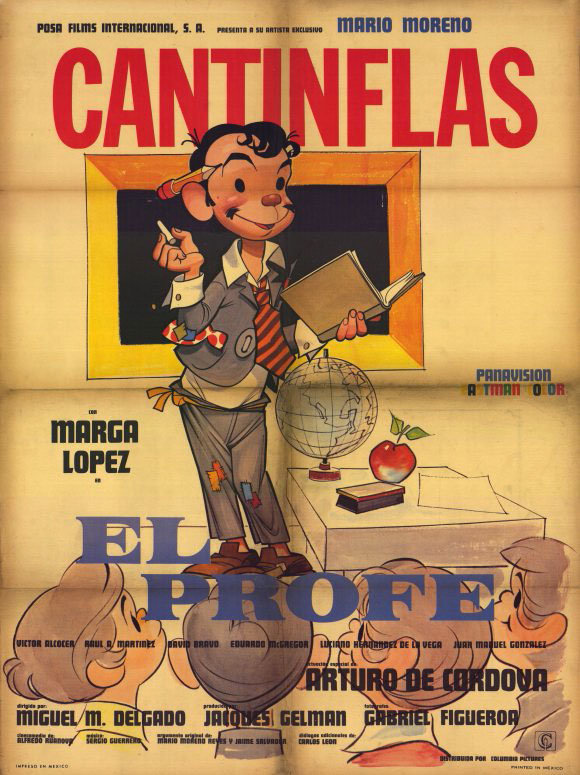 El profe (The Teacher), 1970, made in the later period when Cantinflas was portraying professional figures, though notably still with the drooping, patched pants. 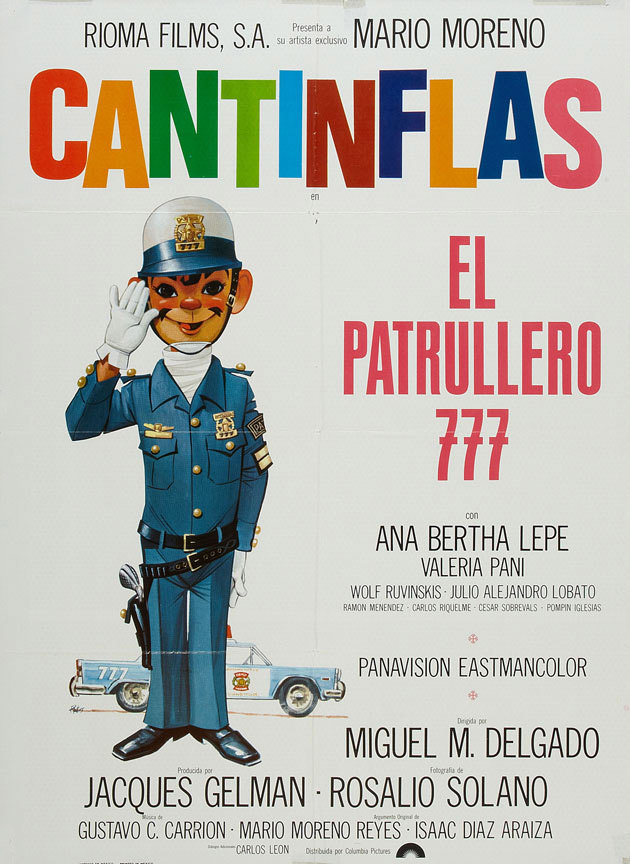 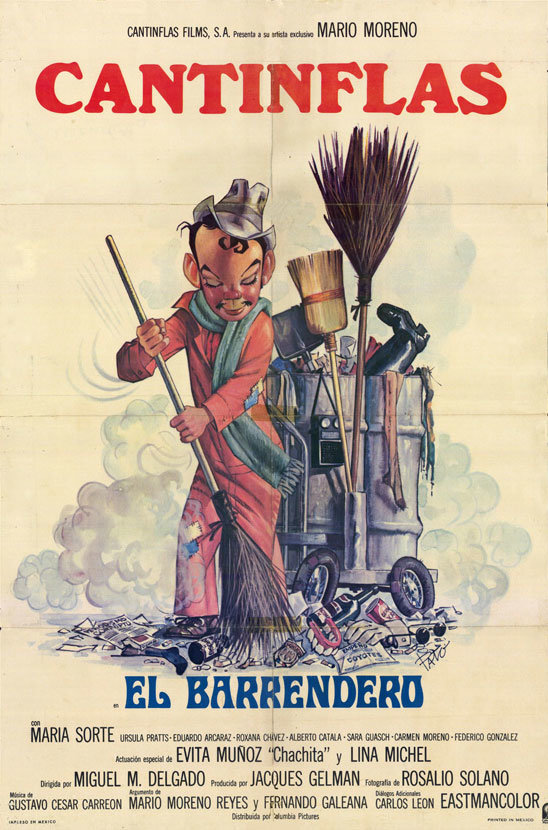 And his final film, El barrendero (The Street Sweeper), 1981.

There are only a couple of Cantinflas films available on Netflix but there are plenty of excerpts on YouTube, including this wonderful clip from his appearance in 1960 on What's My Line where, ironically, the famously loquacious comic says almost nothing.

Many thanks to Genevieve Villaflor for pointing out the article (when I was more focussed on going ziplining) and to Cristela Henriquez for help with translation and invaluable background information.