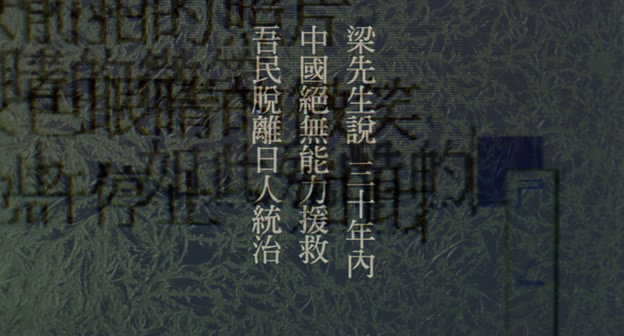 About half way into Three Times—it's 1911, though a few frames before it was 1966—a sudden rupture occurred. Either a hand had slipped somewhere or Hou Hsiao-hsien is more radical, more reckless, and profoundly more Joycean than I had thought. It took a minute to register—the jump. A man and a woman silently in love and unrequited inhabit a series of spare rooms, their lingering glances and soundless words punctuated by an old servant lighting the hallway lanterns as the sun sets. Then, in a cut like half a breath, the pale lights cast by the turn of the century transform into the pixilated, sleepless light of a cell phone screen; a dejected, disintegrating romance appearing black and jagged in the characters of errant text messages meant for an off-screen lover.

Immediately a voice called out from the back rows of the theatre: That's fucked up. And then in response, a disdainful shhh! from the front. The following seconds were filled with confusion. What was fucked up? The horror of such a blatant cut in time? The transcendent beauty of it? Or, had something happened? Was a reel out of place? Or, had they yet again failed to check the print—shipped from somewhere far away like Taipei?

The shhhh! seemed as it always does—a petty call for order and public decency in a dark room built for the imagination. But it could be right. Order is sometimes necessary, and, whatever had happened, the order of things, along with our expectations of temporal continuity, had been disturbed. The question unraveling in the audience's mind as the claustrophobic image of the cell phone screen cut to a face, then to a woman watched from over her shoulder—who we recognized as the sixties bar hostess already transposed to the floating world of the evaporating Qing dynasty—was one of intention: was it fucked up, or had someone, the lowly projectionist maybe, fucked up?

The film stopped. Everyone started to whisper. Some laughed while others sighed and checked their watches. A few minutes later the film began again. We were back in 1911 as if nothing had happened. We should forget the cut. It was wrong.

Sometime later we witness the same moment again, the cell-phone screen and the strung out text messages, though this time in their 'right' context. The continuity of love and sexual politics across time has been made clear. We know the woman and the man as they are in this time, drifting together through clubs and their two modern apartments, and can situate them by their relation to their echoes in 1911 and 1966—their vague innocence and the near total impossibility of communicating anything through words.  And yet, I could sense tangibly that the more perverse of us in the audience were lamenting a different, possible movie; one where the temporal lines were not so clear, in which love and glances and faces were less contiguous. For a moment we had glimpsed it, but just as suddenly, mimicking the shock of that cut, we had been told that we were wrong, that it was wrong, and that the possibility was never really there. Fucked up was only a fuck up, and not a revelation, certainly not an artistic one.

So what do we do? Do we take the advice and forget? Do we keep looking for others, for more bad splices in time? There is the chance that they are only a problem of concept, that the difficulty is simply how one can achieve the unexpected without it actually being so. In other words, is it possible to make a mistake, to create an image out-of-time, as more than a record of an idea? No one seems very sure, which is the history of cinema, though we can, I think, take consolation in imagining that Hou Hsiao-hsien is probably one of us. Had he been there and witnessed the creative spark of an accident cut into his own ideas—I can imagine him with a wry smile. As one who has tried with every image to capture the transience of sight, which we call history, he must be familiar with these small revelations, otherwise known as mistakes. His ellipses and conjoined timeframes seem, through their very construction, to provoke and desire these accidental ruptures. It's ingrained in how he constructs his shots, the lingering transitions between moments; how each part plays an overlapping game with other memories, songs, and images. He would welcome the disruption of his own intentions as a kind of answer which can only be arrived at obtusely. Or, perhaps not. It's equally possible that he would only feel tampered with, as if time itself were recoiling at his attempts to reveal it. There would be no smile.

For the audience, we are left as usual hovering in that space between complacency and revelation, constantly asking the question of whether or not what we are seeing is what we were meant to see. It's a valid question, but one whose only purpose is to be punctured and burst now and again so that we might gain a little energy from the shock. Ours, then, is a life spent waiting for accidental nights like these.﻿