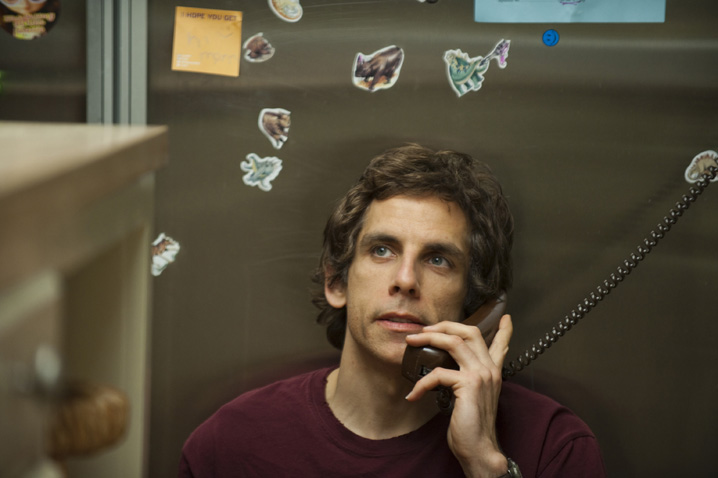 Strip the slapstick and the rom-com conventions from Ben Stiller's onscreen persona, and of what's left, what would be the ratio of dark to comedy? One very plausible possibility is Roger Greenberg, about to turn 41, a carpenter by day, though he's made a conscious decision to "do nothing" for a while, recently treated for a bout of mental instability possibly brought on by the death of his mother, quick to fly off the handle, a New Yorker and not quite as funny as he thinks he is. In Greenberg, Noah Baumbach holds off on introducing us to Roger in order to focus first on Florence, the subtler, and frankly, more interesting character played by Greta Gerwig. She's passive, he's aggressive: Valentine's Day at the Berlinale.

Florence is an assistant to Roger's brother's family, whose multi-storied house in Los Angeles is quite a spread: a lavish pool the neighbors are free to use anytime, a maid, garden service — and Florence, who, as she tells a one night stand-to-be at a party, has now been out of college as long as she was in it. When the family heads to Vietnam on vacation, Roger appears, which is to say, the back of his head appears on the left side of the frame as he talks on the phone, and the camera gradually pulls back, and Roger's head turns just so, and — it's Ben Stiller! A film that had been laying out its exposition in some territory between two all but defunct American institutions, "independent film" and "mumblecore," receives a sudden jolt of Hollywood star power.

And Ben Stiller is very good at being Roger Greenberg. Problem is, Roger Greenberg (unlike, I'd imagine, Ben Stiller) is no fun to be around. Little wonder all his old Los Angeles friends are none too pleased to see him again. Of course, his cheap shots at LA's ways of being LA don't help, but there's more. Roger was in a band back in the day with some of these guys and one of them, Eric Beller (Mark Duplass), is outright hostile. The band had been offered a contract, Roger didn't like the terms, and that was the end of the band. Another bandmate, though, Ivan (Rhys Ifans), is willing to make a stab at bringing the old times back.

Baumbach's comedy is one of discomfort, but the stakes in Greenberg aren't nearly as high as they are in, say, The Squid and the Whale. When Roger and Ivan try to figure out what to do with themselves one afternoon and come up with nothing, the embarrassment level is sufficient, but there's no tension. The friendship had been on the wane for years anyway. Roger and Florence may or may not hook up, but as Roger keeps blowing it time and again with his bizarre little outbursts, some of us may find ourselves hoping he'll just get out of the way and allow her tender heart a shot at finding someone worthy of it.

Don't get me wrong. My frustration with Greenberg has nothing to do with an inability to warm up to a film with an "unlikable" central character. I'd put Raging Bull, for example, high up on a personal list of all-time bests. Greenberg has its moments — even Roger does, particularly at a party where he does a line of coke and tells the kids these days exactly why he hopes he'll never be facing any of them in a job interview — but let me put it this way: Jake La Motta messed up his life in far more engaging ways than Roger does his.

The AFP, AP and Reuters all report on the press conference.

A first review in German: Thorsten Funke at critic.de.

"While winning no points for originality, Baumbach and his co-conspirator in the script, Jennifer Jason Leigh — whom he directed in his previous examination of psychological trauma, Margot at the Wedding — have created an all-too-convincing portrait of a 40-year-old man in emotional freefall," writes the Hollywood Reporter's Kirk Honeycutt. "What they are unable to fully achieve is a means to make enough audience members care so that Greenberg might cross over to a wider viewership than a psychiatrists convention."

Updates, 2/15: "Stiller is cannily cast here, offering a calmer sad-sack spin on his trademark obnoxiousness," writes Guy Lodge at In Contention. "[W]hen he glumly observes that 'Life is wasted on... people,' it almost plays as a real-world Zoolanderism. But the film's real joy is Gerwig, a fixture of the mumblecore scene now making her play for more mainstream indie stardom; gawkily endearing here, with a perceptive quality that fends off the cutes, she deserves to get it."

Tim Robey, briefly, for the Telegraph.

Eugene Hernandez reports on the press conference for indieWIRE.

Update, 2/17: "For the first time in a long time, Stiller actually gives a performance instead of simply clamoring for attention," writes Salon's Stephanie Zacharek. "But Gerwig is the marvelous surprise here. Her Florence is one of those seemingly lost girls who wanders through the world looking gangly and awkward and who is yet, strangely, wholly at home within herself (even though she herself doesn't know it). Her spaciness is the down-to-earth kind. Greenberg is self-conscious and knowing, and, as we'd expect from Baumbach, sharp-witted. But its self-involvement is capacious enough to include us. Greenberg has a soul, a heart, and most importantly a sense of humor — not just about the world, but about itself."

Update, 2/18: "Greenberg is a delicately observed, very well acted character study that is undermined by the utter obnoxiousness of its main character," finds Geoffrey Macnab in the Independent.