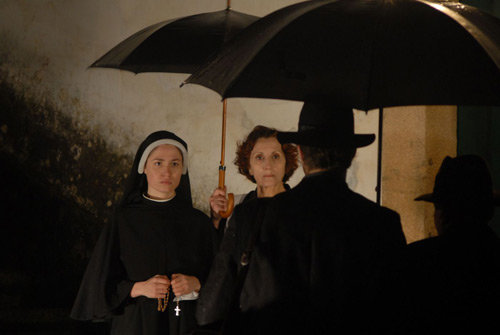 Angelica only comes to life in a viewfinder and some photos: not as life, but as a movie—a trace of life. Oliveira returns to the Douro valley, where he shot his first movie—Douro, River Valley (1931)—a documentary/ pastoral symphony and part-ode to mechanization/collectivization (of sorts), and has his surrogate protagonist documenting the last collective rural workers of the area: a nostalgic attempt, he says, to preserve the past. At an extended supper, life-long pensioners—something out of Balzac, or Monteiro´s own nostalgic Portugal in Memories of the Yellow House—discuss the traces of starlight that appear long after the death of the star. But they also discuss the economy and recession.

Like most—all?—of Oliveira's films since Rite of Spring, a stagey, visibly artificial vestige of the past, filmed only as exterior evidence of ritual and performance, becomes capable of exploding a material, modern present from the inside: in historical violence, in eternal passion: but there's little difference between the two. Whether in the 30s of Douro Valley, the 50s of Oliveira's original script for Angelica, or 2010 as Portugal faces economic collapse: Angelica, as the photographer hopes, belongs to all these ages in a site of eternal, historical, agrarian reform. But Angelica is probably the first time Oliveira has openly identified the trace, "temporization of a lived experience which is neither in the world nor in 'another world,' which is not more sonorous than luminous, not more in time than in space," with cinema—not theater—itself. And the cinema of Melies, transparent special effects, another trace. Etc. etc.

A series of neat equivalencies--like in the closed-circuit signifiers of A Talking Picture—wouldn't have the mystery Angelica has for the photographer. Oliveira's traces are neither full recoveries nor grave markers, but some sort of movement in-between: imitation of life. What is an artificial vestige of the past and what is a modern, material reality becomes impossible to chalk up as Oliveira makes the basic task of his own movie to simply watch, to document the traces of the Douro Valley: the natural light of foggy days into an ancient, stone-fortress-like dining room on the 2nd floor; a cat watching a bird as its tail flicks. In Oliveira's space, Vermeer-like, light often enters as a rear projection or from a window off-screen; in the montage, Ford-like, ongoing conversations are absorbed one side of the room at a time, for minutes, while outside elements watch, converse: a practical extension of the film`s country kitchens, one person boiling water, another standing, another sitting, all talking together, each with a frame on the room that only changes when, hours later, places are exchanged. Heads are framed in close-ups against background walls, both flattened as frescos and released into a indeterminate, floating space, just off-center, before Oliveira cuts to wide shots placing the characters in their setting, but still edgewise, variables in the composition but standing steady as if painted.

The question of documentary record or eternal pose remains a mystery. Angelica's ghost, never suggested for a living Angelica, figures as both. Like Angelica,Angelica is another Oliveira film neither in the world nor in 'another world.' Nor outside them. In a world of nostalgic rituals, where and when does Oliveira's proverbial ghost story take place? Oliveira's own return to his origins, in photographing the Douro Valley, both photography and valley forever going the way of the past, is as much as its photographer´s ghost both a record and its own creation.

Some excerpts from an interview with Oliveira from the Angelica press packet below:

Manoel de Oliveira: In the first version [his 1952 screenplay], there's still a doubt because the photograph Isaac takes of Angelica when she smiles, is spoiled before he can develop it. In this new, more realistic, version, the photographs neither confirm nor refute Angelica's smile. But, as Isaac confesses, it's the recollection of the smile that makes him happy and frees him of all his traumas. Interestingly, the decorated ceiling in Angelica's house with the dove (representing the Holy Spirit), is a Jewish ceiling in the shape of a star. And there's the dialogue with the nun, who in the first version was just a very religious woman, but not a nun. These two elements serve to show that the relationship between Catholics and Jews was not antagonistic, not exclusively argumentative but one of comprehension and exchange.

António Preto: By establishing, somewhat insistently, a relationship between Isaac and olive trees—like when you frame him in front of an olive tree, or when he falls in the olive grove and some children appear singing a folk song about olive trees—are you not thinking about your own possible Jewish origins and, to some extent, reinforcing your identification with the character?

M.O. Well the business with the olive trees is very important... I'm Oliveira (olive tree)... My paternal grandmother was very religious and my grandfather always gave his children two of his surnames instead of one and their mother's maiden name, which was from a different line from his. Two of his children became priests because my grandmother was so religious. Theree wasn't a trace of Judaism on that side. Someone told me that after the French revolution Jewish people were forced to adopt new family names: Isaac, son of..., Israel, son of... something like that. And among the names they chose were the names of trees: Oliveira, Pereira (pear tree)... and so on. So it's a possibility, but the truth is I've never been able to come across any real evidence of Jewish heritage in my family.

A.P. In a way, Angelica is also a tribute to the workers of the Douro. The old ways of working the vineyards, which still exists today alongside modern mechanical methods, is something you evoke in this film. And what's the "essence" of the film? Isn't it, in fact, transformation?

M.O. The essence is Isaac's destiny, his fate. it's all about Isaac, the photographer, right from the start of the film. He's a cultured, spiritual man, which perhaps explains his propensity for the metaphysical and so justifies the end. There's only one very big compromise that I'm away of: when Isaac dies, his spirit lives on. That ending is the riskiest aspect of the film. If he died, the film would end. But he survives. His soul meets up with Angelica's spirit. At the same time, his fate could mean that Man's only true release is through his own death, like you see in Dreyer's Gertrud. The search for absolute love that can only be found in death itself. Then there's the gravediggers' hostility. Their song is a stark contrast to all the pessimism, and that lightens a certain negativity that could otherwise surface through the film and especially at the end. Though of course, some strange things are strange simply because we can't get past them. St. Paul said that if Christ hadn't resurrected, all our faith would have been in vain. So we're always left with the uncertainty: 'to be or not to be'...

A.P. Isaac is a photographer, an artist. He works a lot, as the landlady at the boarding house never tires of saying. He lives on the margins of a cohesive society.

A.P. Isn't Angelica as well a film about the clash between artistic creativity and resistance or, if you like, the antagonism between the social side of things and the work of creating.

M.O. Yes, it is a work of resistance. All work is resistance. Nature is devious. She gave Man hunger to make him work, to make him survive and work. Hunger is the law of Man. If you have ten men and put two hundred bread rolls beside them they'll be fine. But if you put just one roll, they'll kill each other. Hunger is a phenomenal power.

A.P. This film leads once again to the controversy of 'frustrated loves' that has figured in all your films.

M.O. Love is abstract and it's absolute. True passion between two beings is so violent that it doesn't even admit children. They would be disruptive to absolute love. Absolute love craves androgyny, it's the anxiety of two beings to become just one. it's an impossible desire, but it's real. Here, everything is violent. This is a terrifically violent film and much more violent than my films about war, which reveal a more or less calculated violence. This is real, it kills. It comes from the individual, the person. The act of filming is... I mean, of photographing, is in itself violent.

I once said that a director is like a murderer. And just as a murderer can't avoid killing, the director can't avoid the act of filming. It's its own attraction and it's fatal because it has nothing to do with life. Life is something else.

A.P. But when you film life aren't you really filming death? Isn't it death that you're continually filming?

M.O. Well, I presume to know a bit about life, but I know nothing about death. I've never tried it, no one has. So it's a puzzle: we don't know anything.

A.P. What is cinema for you today?

M.O. It's the same as it was for Lumière, for Méliès and Max Linder. There you have realism, the fantastic and the comic. There's nothing more to add to that, absolutely nothing.

A.P. And the tragic?

...The artist has no land. But he's rooted in his instincts, in his gift as a creator, just like the painter is or any other artist. I believe in fate, in the metaphysics of angels, let's say.

Rembrandt painted throughout his whole life, he produced a lot of self-portraits. The only thing that stayed the same was the look in his eyes. There was a Dutch director who filmed all of Rembrandt's self-portraits in close-up [Bert Haanstra], which confirmed that the eyes always  stay the same, inalterable. The face changes, until it becomes old. In the last of those paintings he said: 'Vanity, vanity, all is vanity.' The awards and the applause, it's all vanity."