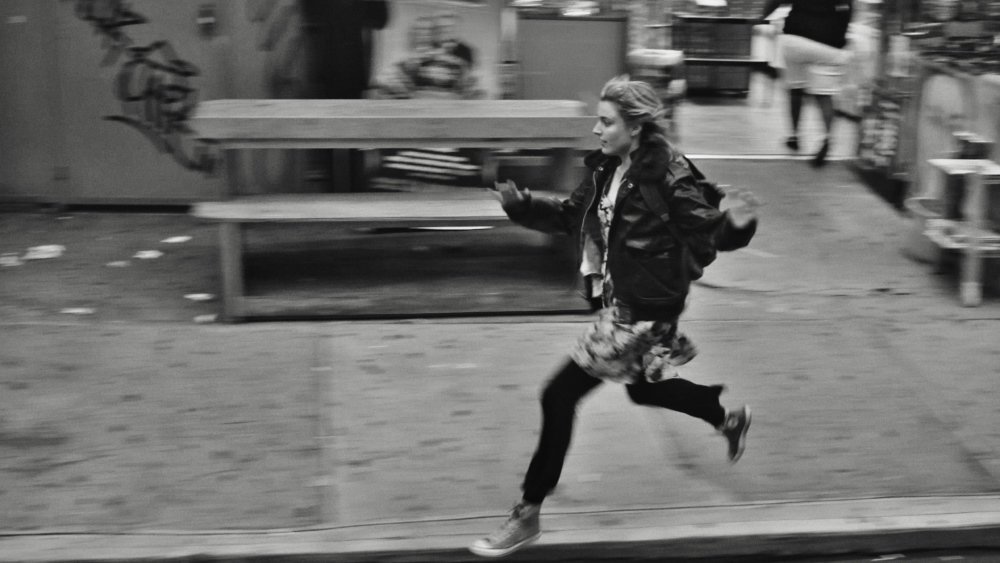 Noah Baumbach's newest movie, Frances Ha, which he co-wrote with his leading lady, Greta Gerwig, is some kind of magic. It not only does away with the often nasty tone of the director's other movies, it likewise does away with what we're normally fed in modern American comedies, the loutish dude who needs a babe, in favor of a pair of ladies as its focus: Frances and her best friend Sophie. In other words, this is not your average hetero-normative fantasy. Rather, it's about the necessarily chaste but nonetheless powerful love that binds us to our "best friends," those once-strangers with which we fashion a new kind of relationship that's just short of family and just beyond friendship.

What's more, the movie is fast, speeding in staccato from one scene to the next with one-liners piling up in a way few American comedies of the past five years have executed. The movie is 86 minutes. It pauses, it even eddies, pooling new energy, but it never stops moving.

This being a story about youth, this friendship hits its rough patch thanks to those ineluctable speedbumps named jealousy and insecurity. Granted, we know them at any age but their power gains from naiveté. And Frances is certainly naive. Her movie, like plenty of others, is about growing up. But the movie feels rare and special because these girls of privilege exist in a financial reality where money matters in an everyday way: rent, ATMs, tax refunds, credit card stupidity, etc. Frances and Sophie aren't poor, per se, even if Frances is often broke, but they aren't rich either. They're simply young. Sophie has a leg up, however: we see she has a job in a building with a revolving door just after we see Frances practically begging to get more work at a dance studio. In fact, Sophie moving out of bohemian Brooklyn for a chance to live in expensive Tribeca is what starts their emotional separation, and Frances' next twelve months of constant motion.

Frances is a dancer, or she wants to be, and we see a good deal of Greta Gerwig flying around the frame (the city). It's not that Baumbach has finally figured out how to talk in images, but one of the pleasures of the fleet nature of Frances Ha is just how much movement (and counterpointed stasis) it captures in each of its specific locales. First, Frances has a narrative trajectory: she leaves Brooklyn adrift, with few prospects, in essence set off to find her literal place in the world. This being a comedy, she succeeds, but not without pit stops everywhere from Chinatown to home in Sacramento to Paris to Poughkeepsie. Next, whenever the situation calls for it, and sometimes when it doesn't, we see Frances moving and/or dancing around a room, a scene, the streets.

Gerwig's physical performance is one of the great joys in cinema this year: it's truly playful. She's playing with the world she's a part of, which we gather is what sets her apart from the world of everybody else she encounters. She also uses her face well, and her off-beat timing sells a lot of the jokes, but the way she moves completes the picture of this young woman, often pigeon-toed sitting down, but eager to bound up and down a sidewalk as she runs towards her future or just as easily tread water in place. Despite all her running and dancing, Frances twice complains about how hard it is for her to leave a place, be it a dressing room or her living room, which is sly irony in that she can't seem to stick in one spot for most of the movie.

Watching Greta Gerwig in Frances Ha is a reminder of what's largely been lost in American movies: character, and intelligence, revealed through actions, movements, gestures, bodies. (One might argue that's all a superhero movie is, but most of the big hits are pretty talky things shot in a lot of close ups—I see you, Christopher Nolan—when not relying on thoroughly fake and literally calculated CGI'd bodies crowding inelegant post-production compositions.) Gerwig's prancing and prat falling and slouching are also funny in a way we don't get jokes these days. Melissa McCarthy is making her career via a similar kind of bodily humor but when she throws her body around a scene it's more often clownish than subtle. No, what I kept thinking of were classic screwball comedies: films like Bringing Up Baby, as antic as any movie ever, with Katherine Hepburn doing her best to exhaust not just Cary Grant but the audience as well; or The Awful Truth, which uses Irene Dunne's gift for singing in a similar way to Gerwig's dancing, to show one way each of these ladies is trying to sublime the everyday (and, in turn, redetermine and redefine it).

None of these movies are so simple as that screwball characterization, of course, and the world of 2013 is not as kind to romantic comedies, which might suggest this necessary shift in perspective away from the hetero-normative (re)union as a storytelling finish line. We might say Frances Ha is a new interpretation of the romantic comedy given its pivot from marriage towards friendship as a primary goal (or as a way to define one's place in the world); we might even say it's a new genre as much as a new story. Or, the world now allows for other stories because we are learning new lessons. The heroic act in The Awful Truth, after all, is the swallowing of pride for the good of the couple, a mutual education in the value of this relationship, which is doubly meaningful given the title refers to the understanding that there's nobody else they'd rather share a bed with, temptations to freedom be damned. The heroic act in Frances Ha is the superficially conservative idea to take a day job. However, the job is by no means simply an end in and of itself—it's leverage. The job affords Frances possibilities she did not know she had, like the inevitable transition into choreography that many dancers are faced with, which is a nice way to frame the transition we all make as we age into adulthood. We become better at arranging the pieces of our lives. And Frances ends the film moving in to her new apartment, a modest studio to call her own, with the knowledge that she has a position on this carousel we call life.

It's a modest aim for a modest movie. But it's ultimately an argument for pragmatism. It's about knowing your own limits before you can integrate with others, with the world. It's also about learning how best to perform that acceptance of your role, as an artist like Frances adjusts her goals based on her skills, or as a strong young professional woman like Sophie stakes a claim for her right to her needs both with and from Frances and her fiancee, Patch. After all, the risk of getting hitched demands your bravery to speak up—in this age when only the rich can be artists in New York, according to Sophie—as much as﻿ the risk to create first necessitates some financial stability. It's the new awful truth of today. Frances Ha seems to say, There's more fun than just paying the bills when you meet the world on its terms because that's what makes the rest of it click. You can't be anybody's everything without being in control of yours first. What's ultimately poignant about the film, however, isn't that this best friendship survives. Rather, the world and life dictate that it change, that it grow up in turn. If your home is known to you by its space, by its walls and dimensions, as we see Frances measure a doorway with her arms in the coda, we might agree the movie is trying to say that shucking youth isn't shucking a skin but building new boundaries that life can reinforce. The grace that comes with that comes later by knowing how and when to open it all up.﻿