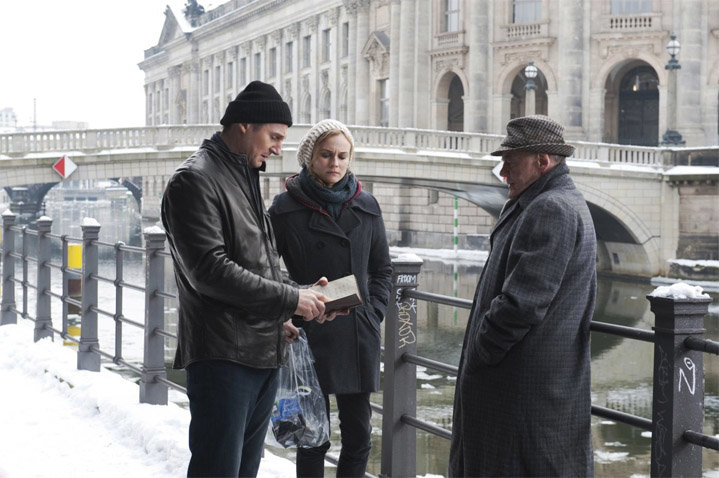 So, the Liam Neeson Euro-Thriller, a grim genre with precisely two entries, where city specifics and vague motivations co-mingle amidst shock-cut car chases, where an Irishman represents American know-how, where local crews conspire to make their respective cities look as dangerous as possible, where America is sold a treacherous version of travel abroad and a ruthless version of itself by Europeans lavishly spending co-production money. But, even in a genre this small, there's room for variation. In Taken, the genre's identifying idea—that sense of can-do American viciousness—is the force propelling Liam Neeson like a wrecking ball through nighttime Paris; in Unknown, it's what he ends up running from in snowbound Berlin, and it's why he ends up spending his Thanksgiving weekend hiding out in the crannies of European history—that is, with a Bosnian immigrant (Diane Kruger) and a hard-drinking, chain-smoking ex-Stasi officer (a gnomic Bruno Ganz).

Taken is pretty damn boneheaded. Unknown is The International lite: cynical politics pared down to a few soundbites, paranoia reduced from a global to a psychological scale, one big-nosed man swapped out for another (it should be noted, though, that Neeson's nose juts forward from his face like a rocky outcropping, whereas Clive Owen's snout sits on his face like a toad). Unknown is talkier—Jaume Collet-Serra clearly relishes the opportunity to put Frank Langella and Bruno Ganz in the same scene; their encounter slows the pace of the film down to a faucet drip—and less relentless than Taken. It's also high-minded in a facile sort of way, with some unflattering ideas about American business and a little Realpolitik inserted into an amnesia plot that could theoretically serve any political ideology. In short: "good craftsmanship," a description applied to filmmaking for the same reasons it's applied to carpentry—because the object, be it a film or a cabinet, is built sturdily and attractively and other objects can be stored in it with ease.

Cinema in the Mission Style? Sure. The design of Unknown is relatively simple, done in thick flat lines, but its not unadorned—though perhaps it would be better if it were unadorned, because Collet-Serra's curlicues (like Neeson's over-saturated flashbacks) are far less interesting that the various containers (like Ganz's carefully-decorated apartment, which looks like was constructed in a drawer box, or the self-contained universes of the techno club and Kruger's apartment, and, of course, the hermetically-sealed hotel) that the film constructs to put the action in.

In fact, Unknown is so compartmentalized (or should that be compartmental?), that, unlike Taken—a film whose xenophobic politics are its plot—it's possible to imagine its handful of "political" scenes / lines re-dubbed, creating alternate versions: Unknown as a conservative film, Unknown as a Fascist film, Unknown as a radical Maoist film, etc. That may be why I prefer Taken, a film whose Arab-sheiks-are-in-league-with-Albanians-to-buy-your-daughters-as-sex-slaves plot is ugly and dumb, to Unknown, a film whose political hardcore inserts I somewhat agree with; Taken seems more complete, more soaked-through, and a good many smart filmmakers could learn from its stupidity. Unknown's intentions—to smuggle some contraband notions about capitalism into a film people will go to see because they know it'll involve car crashes and Liam Neeson punching people in the throat—are admirable but bloodless, because in movies as anywhere else, politics is a matter of actions more than words, and the film's patient, unusually sympathetic portrayal of the East German secret police comes across much more strongly than the sly implication, overheard at the end, that the plot's unseen villain has been the US agriculture industry. Still, the film scores a small coup in its last minute, when Neeson and Kruger emerge on a train platform with their fake passports and new identities and the film reveals itself as the vacation romance it's secretly been all along; there's something to be said for a movie that posits true freedom for an American abroad as a Canadian citizenship.