New York's Logan Hill notes that Charles Ferguson's "rip-snorting, indignant documentary" Inside Job opens with a shot of the NYC skyline that's "almost identical" to another in Oliver Stone's Wall Street: Money Never Sleeps. But Inside Job "directly takes on the bankers behind the 2008 financial crisis, attacking early and often.... This isn't some maudlin and comical tale, like Michael Moore's Capitalism: A Love Story; this film is a smart, inciting rant. The documentary argues, as many have, that there is a kind of toxic co-dependence between the financial services industry, Washington, and university economics departments. If Goldman Sachs is a vampire squid, Ferguson is attempting to map out all the major conflicts of interest in the financial world: a kind of Transylvania Sea World."

"Slickly shot and produced, it lends a voice — Matt Damon's — to the current mood of indignation against fat-cat bankers, but does a lot more to explain, in quietly passionate tones and with a more waspish sense of irony than Moore's, what went wrong and why it is still going wrong." Lee Marshall in Screen: "Inside Job performs the task admirably in audiovisual form so that even financial dummies — like this reviewer — come out feeling enlightened and suitably angry."

"Inside Job presents a stunning array of interviews with a broad range of participants and commentators," notes Duane Byrge in the Hollywood Reporter: "hedge fund managers, business-school faculty, Justice Department officials, Federal Reserve chairmen, Congressmen and even a Wall Street 'Madam.' However, Inside Job is no talking-heads drone. It's a lively, droll and acidic shakedown of the insiders who perpetrated this crisis."

Introducing his interview with Ferguson for the Wall Street Journal, Anthony Kaufman notes that the filmmaker (his first doc, of course, was No End in Sight) "boasts some impressive credentials. In the '90s, he was a technology consultant and entrepreneur — he sold his Internet company Vermeer Technologies to Microsoft for $133 million in 1996 — and has written such books as High Stakes, No Prisoners: A Winner's Tale of Greed and Glory in the Internet Wars (1999) and The Broadband Problem: Anatomy of a Market Failure and a Policy Dilemma (2004)."

The grades are mixed at Letras de Cine. Page at Cannes. More. A Special Screening.

Updates: "[T]he film doesn't offer much in the way of revelation," writes Guy Lodge at In Contention, "but benefits enormously from Ferguson's wickedly predatory skills as an interviewer, cornering vulnerable subjects into relishable foot-in-mouth moments. Meanwhile, the film makes a witty virtue of the number of dubious economic players who declined to participate – ranging from Alan Greenspan to Timothy Geithner – solemnly listing their names throughout as virtual badges of honor."

"Inside Job nails down how 'deregulation' was, in fact, a form of collusion," writes Entertainment Weekly's Owen Gleiberman. "Ferguson, a former academic, does a ruthless job of revealing an aspect of the scandal that few have talked about: the selling out of prestigious economists who work in academia. It was these elite professors who gave seductive credibility to a corrupt ethic."

The NYT posts clips from Dennis Lim's conversation with Ferguson.

New York's Logan Hill talks with him, too.

Update, 5/19: "The larger message of Inside Job is that American optimism — the engine, for two centuries and change, of our national expansion — can also have tragic consequences," write Mary and Richard Corliss in Time. "The conquest of Iraq? A slam dunk. Gambling billions on risky mortgages? Not to worry — the housing market always goes up. Ignoring darker, more prescient scenarios, the smart guys in charge constructed faith-based policies that simply couldn't go wrong. In their myopia, they stumbled toward a precipice, and the rest of us fell off. Somehow, though, they stayed at the top. Instead of convictions and jail time, they got bigger government jobs, fatter paychecks in business, cushier sinecures in academe.... In its non-doctrinaire, subtly devastating fashion, Inside Job details how, in the Obama White House, Summers and Geithner and the same old boys are calling the shots of a recovery that has benefitted their cronies without enriching the average Joe. It's as if the pederast priests and their high-ranking apologists had taken over the Vatican."

Update, 5/20: "Stylistically, Inside Job surprised me only by Ferguson's occasional use of the sort of hyped-up techniques and urgent music that he so studiously avoided in No End in Sight," writes Todd McCarthy. "It's agit-prop, after a fashion, in the way the previous film was not, a call for action on the part of the citizenry and for reform from a government he rightly sees as having rewarded the culprits largely responsible for the mess in the first place." 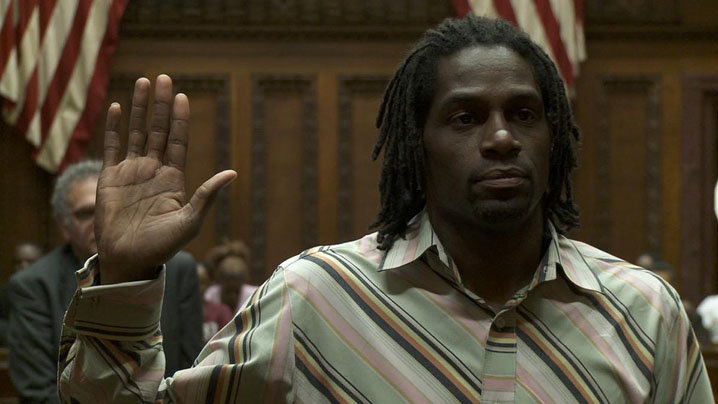 Meanwhile, over at Directors' Fortnight: "Cleveland vs Wall Street is subprime filmmaking," writes THR's Duane Byrge. "In this documentary on the devastating numbers of foreclosures that have crippled certain neighborhoods in the Rust Belt city, filmmaker Jean-Stéphane Bron concocts a mock trial in which Wall Street is the defendant. Usually one must drop by street theater to witness drama this crude or attend a university production to find a message this didactic." Page at Quinzaine. Letras de Cine.