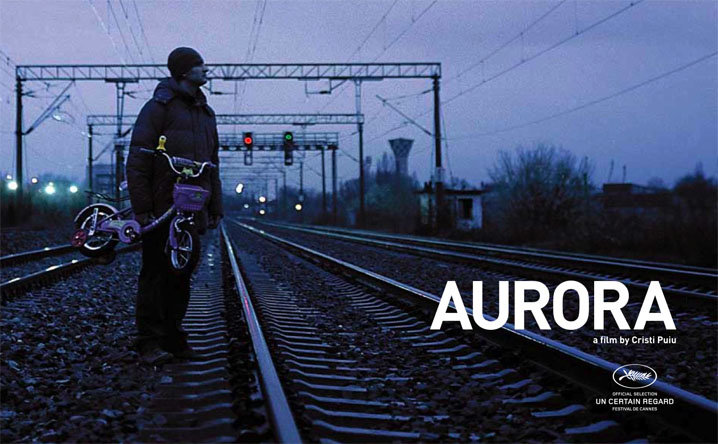 "Is this Romania's year at Cannes again, as it was in 2007?" asks Ben Kenigsberg in Time Out Chicago. Aurora is "the long-awaited new film from Cristi Puiu, the director of The Death of Mr Lazarescu... That masterful tightrope walk is a tough act to follow, and the mostly excellent new film doesn't quite live up, but it does make brilliant use — over three hours — of what might be termed 'deliberate boredom.' Although the movie was five years in the making, you could be forgiven for thinking that Puiu had seen last year's Police, Adjective [by Corneliu Porumboiu] and thought he could make a better film about a man — well, walking around. (It's best not to give the plot away.)... [T]he movie gradually uses its metal-worker protagonist's story as a springboard for another dark comedy about inefficiency. But this time, Puiu proves even more merciless in his eagerness to taunt his viewers — in a good way. Here's an alternate title: Police, Passive Verb."

The Boston Globe's Wesley Morris: "It's refreshing to be in the hands of a director who knows what violence is, who knows what a terrible jolt it is to hear a gunshot, whether it's fired 100 feet away from the camera or 10 inches. Puiu makes killing look easy but keeps it extremely difficult to watch. Every time Viorel pointed his rifle, my seatmate and I covered our eyes. Life still means something in this director's world. So does art."

"This idea of juxtaposing long, long stretches of quotidian detail with short bursts of shocking violence goes all the way back to Chantal Akerman's masterful Jeanne Dielman (made in 1975)," writes Mike D'Angelo at the AV Club, "but where Akerman and her lead actress, Delphine Seyrig, managed to construct a fascinating neurotic ballet from ordinary bits of business, Puiu merely seems to be inflicting tedium as an intellectual weapon. (Expect plenty of critics to take the bait.) With few exceptions, individual 'scenes' possess no conceivable interest apart from being expressly mundane — one could argue that a truly ballsy (and Warholian) version of Aurora would have run 10 hours or more and included several consecutive hours of its protagonist soundly sleeping."

"I certainly don't have any a priori opposition to long or slow films (Jeanne Dielmann is a masterpiece), but the hard work they require of the viewer must be justified by their intellectual or emotional projects," argues Matt Noller at the House Next Door. "I don't think Aurora does that. Deconstructions of cinematic violence are hardly fresh or profound anymore, nor are examinations of the banality of evil; nor is the way Puiu goes about these projects particularly unique in a long-shot-favoring international film culture."

Because both mention Akerman, now's as good a time as any to take note of a slow rumbler of debate Sight & Sound editor Nick James set in motion in the April issue — the piece is excerpted by Ron Reed at Filmwell — over what he calls "Slow Cinema," a "'varied strain of austere minimalist cinema that has thrived internationally over the past ten years,' as Jonathan Romney put it. 'What's at stake,' he wrote, 'is a certain rarefied intensity in the artistic gaze... a cinema that downplays event in favour of mood, evocativeness and an intensified sense of temporality.' I admire and enjoy a good many of the best films of this kind, but I have begun to wonder if maybe some of them now offer an easy life for critics and programmers."

HarryTuttle has leapt on this with the vehemence of a fanboy who's come across a negative review of The Dark Knight. That's not meant as a personal slight in any way whatsoever — I have a great appreciation for all that HarryTuttle's done at Unspoken Cinema — but I can't help but objectively observe that when our passions are affronted, as diverse as they may be, we often respond in similarly irrational ways: "I can't believe a serious magazine would publish such anti-intellectual banter. If you don't like these films, deal with it frontally. No need to pretend that art would never put you to sleep. I believe the guilt is onto the sleeper."

"Will it get me expelled forever from the ranks of Film Bloggers Who Can Be Taken Seriously if I state that I am more in agreement with James than with Tuttle here?" asks Steven Shapiro. "There's an oppressive sense in which the long-take, long-shot, slow-camera-movement, sparse-dialogue style has become entirely routinized; it's become a sort of default international style that signifies 'serious art cinema' without having to display any sort of originality or insight. 'Contemplative cinema' has become a cliche; it has outlived the time in which it was refreshing or inventive." I should emphasize, though: Do read the entire entry. There's much in the "Contemplative Cinema Canon" he rightfully defends — including Akerman and, of course, Michelangelo Antonioni.

But back to Aurora. It's "a long hard slog," finds Screen's Lee Marshall, but: "After auditioning around fifty actors, Puiu was persuaded to play the main role of Viorel himself — and in this his instinct is sound. Viorel's lack of readability is what makes the film both fascinating (in small bursts) and frustrating.... Mr Lazarescu was a compassionate Dantean journey with the indifferent city as its backdrop; in Aurora, hope and pity even in the midst of degradation are replaced by unremitting despair and bleakness."

"Aurora is a work grounded in physical reality while considering the enigmatic nature of human behavior," writes Robert Koehler at filmjourney.org. "It resonates, and it's impossible to stop thinking about it."

"Puiu constructs Viorel's gradual downfall as a purposefully overextended black comedy," argues Eric Kohn at indieWIRE. "By offering context on the tail end of a story where a conventional version would have it at the beginning, Puiu invites repeat viewings — although his unhurried style is certain to turn some viewers off for the same reason it will turn others on."

"Many will (and indeed, already have) admire Aurora for the brazen, uncompromising endurance test that it is," writes Guy Lodge at In Contention, "and in an uneasy, deadpan final confession sequence, at least, it partially earns their plaudits, but it's hard to see arthouse patrons cottoning to it in quite the same numbers that they did the comparatively pithy Lazarescu. Perhaps Puiu himself seemed aware of this as he introduced the film at [yesterday's] press screening, sheepishly saying, 'It's a very long film, and for that, I feel for you.'"

"Whatever else you may read about the film," cautions Geoff Andrew in Time Out London, "it's not so much about the act of killing as about what there might be in any of us that might just move us, in very particular circumstances, to kill. The elliptical, mostly dialogue-free narrative simply follows the man around, observing his gait, his gaze, his unconscious gestures; it is left to the director's own extraordinarily eloquent (if unusually taciturn) performance to suggest the complex tangle of emotions and thoughts going through the clearly perturbed protagonist's mind.... Superb stuff."

Updates, 5/17: Manohla Dargis in the New York Times: "Instead of pumping up the narrative with familiar thriller (and musical) beats, Mr Puiu builds tension through absence, creating palpable unease through lingering silences, a dearth of heightened drama — before the gun goes off, the exchanges are fairly banal — and an emptied-out apartment. Only later do you grasp that this man has been hollowed out too."

Page at Cannes. Un Certain Regard.