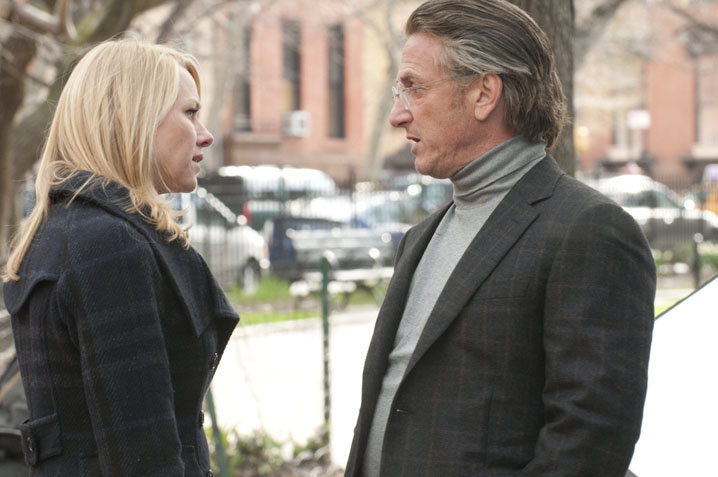 "Well, we've finally gotten to see the main competiton's sole American entry: un film Hollywood de Doug Liman!" exclaims the Boston Globe's Wesley Morris. "But if we're being honest, Liman isn't the reason his movie is in the festival. Fair Game turns the Bush II White House's outing of the CIA agent Valerie Plame into a slick thriller. It has stars (Naomi Watts, as Plame, and Sean Penn, as her husband, Joe Wilson). Almost as important, it serves to make people mad all over again about the case made to invade Iraq seven years ago. That's its appeal. For an hour or so the movie is well-made entertainment. It's just over so abruptly — with Penn running around America giving college lectures begging students (and us) to demand the truth — that it feels like a retroactive petition more than it does a movie."

"I'm a little unsold on Fair Game (it's too stolid, too by-the-book)," writes the Guardian's Xan Brooks, "although it clearly excites the hell out the French journalist in the row behind, who starts bucking and thrashing against the back of my seat. It's like he's having a seizure back there."

"For those of us who paid attention throughout the Bush administration, watching Fair Game will come off as one big yawn," writes David Bourgeois for Movieline. "Granted, it's a tough gig, directing a film about real-life events without either factually botching the movie or making it so soupy-dramatic that the end product hardly matches the events itself. Liman should have been up for the task: He's directed some decent films — Go, Swingers, and The Bourne Identity — but this time out, he seems to care little about the talent needed to direct actors."

"It's a well-made and stirring movie," counters James Rocchi at IFC.com, "on the level of both the personal (How will this marriage survive?) and the political (How will this nation survive?). Fair Game is nicely shot, written in a blunt and brisk style that assumes you're capable of following along, a rare pleasure in the modern American cinema.... Jez and John-Henry Butterworth, adapting both Plame and Wilson's memoirs, fill the film with leavening humor and matter-of-fact realism about the paper-shuffling nature of modern spycraft. After she's exposed as a CIA operative, one of Plame's friends can't hold back her curiosity about the John le Carré cliché's: 'Do you have lovers all over the world? Do you have a gun? Have you killed people?' After his trip to Africa culminates in him drafting a lengthy memo, Wilson notes, 'I'm not feeling very 0-0-7-ish...' And that is the greatest challenge Fair Game faces; it's a movie about the fact we don't live in a movie, a drama about how the thousands of lives and millions of dollars wasted on the war with Iraq affected one couple's marriage."

For indieWIRE's Eric Kohn, the film "strays from fiery political commentary in favor of an insistently unsentimental tone that only occasionally moves beyond the level of a solid made-for-TV routine."

"To the film's detriment, Liman assumes the audience knows nothing at all about the post 9/11 lead-in to the war and spends half the film building up a story that is already a national anecdote," writes the Playlist's Kevin Jagernauth. "But as the film moves into its second half and the sinuous workings of the Washington political machine come into play, Liman finally finds a foothold and film rockets forward."

"The only real question I have is just what was left on the cutting room floor," writes Brad Brevet. "I've read Plame's book and I thought it was deceitful to bring up the Vanity Fair article and then play as if it never happened, when in fact it did happen and the photo that resulted became a major problem. I also thought it was interesting to play it as if Plame was instantly dismissed from the CIA and to avoid much talk about the family's money problems. Also, the sentencing of Scooter Libby (David Andrews) seems to come out of nowhere in the end, announcing the film is nearly over, which had me looking at my watch, surprised it was all done."

In the Los Angeles Times, Rachel Abramowitz talks at length with the film's makers and Steven Zeitchik and John Horn assess its prospects: "We talked to a number of buyers who were at the screening, nearly all of whom agreed the movie was well made but also came with distinct marketing challenges. Given its political themes, it's the kind of film that will go over like gangbusters in Cannes, they said, but its larger audience remains a question mark."

Updates: "For better or worse, there's nothing else like this in Competition," writes Guy Lodge at In Contention. "It'd be nice to see Liman reconcile this new grown-up persona with the wit and zip of his 1990s Go days, but for now, Fair Game works as an efficient bit of career rehab: he's still the odd man out on the Croisette, but there's no reason to point and stare."

Watts and Penn "turn in characteristically agonized performances as the buffeted couple in the eye of a vengeful government's storm," writes the Telegraph. "But the story, especially at this point in time, seems a little slight to merit feature-length treatment, and the emphasis on their ailing marriage in the final third of the film renders it more rather than less trad."

"How does one raise a family and create a false appearance to maintain a parent's cover?" asks the Hollywood Reporter's Kirk Honeycutt. "In other words, this is the real version of James Cameron's tongue-in-cheek action comedy True Lies.... Fair Game might be one of the best spy movies ever, even if it contains little skullduggery. Like a John le Carre novel, its story shows how things really work and how compromised lives can become when one must serve more than one master."

"It is fast becoming the year of Jez Butterworth." Mark Brown talks with him for the Guardian.

"As long as the action bounces around from Kuala Lumpur to Amman to Cairo to Baghdad to CIA headquarters, with occasional stopovers in the Wilson-Plame household in suburban Washington, Liman is in his element," writes Salon's Andrew O'Hehir. "It may help that the Butterworths are not American and came to this complicated story as outsiders. They've written it as a well-structured political thriller, balancing action beats and relationship moments in careful measure."

"This was a case of railroading on a national scale, and even reading the headlines, it's easy to lose sight of the toll that the leak would take on Plame's personal and especially professional [life]," writes Ben Kenigsberg for Time Out Chicago. Still, there's nothing here that's new news... You can't help but wonder if the movie was intended primarily for future generations — or perhaps for foreign audiences, who weren't as basted in this story between 2003 and 2007."

Updates, 5/21: "Greeted with solid applause and a smattering of boos after its first press screening, Fair Game has an enjoyable opening hour before disintegrating into melodramatic hooey," writes Manohla Dargis in the New York Times. "Mr Liman said Fair Game was the kind of movie he had always wanted to make (his previous titles include Mr and Mrs Smith and the first Bourne movie), invoking the memory of his father, Arthur L Liman, who served as the chief counsel to the Senate committee that investigated the Iran-Contra affair, the arms-for-hostages scandal that blew up in the Reagan years. Given the younger Mr Liman's stated goals and that the movie takes aim against the Bush administration and the complicit news media, it is too bad that the story insists on turning into a marital soap opera."

"[F]or the Butterworths and Liman, infusing some urgency into the Plame-Wilson story should have been a slam dunk," writes Time's Richard Corliss. "Instead, this is a fitful, soggy docudrama with only a few redeeming frissons."

"Ultimately, Liman is primarily concerned with presenting Wilson and Plame as noble victims of the evil Republican machine," writes Matt Noller at the House Next Door. "I can't help but agree in general (it's obviously a lot more complicated than that), but all the one-note righteous indignation isn't especially compelling. So, despite all the protestations, it turns out that Liman isn't at all out of place in this year's competition; Fair Game is just mediocre enough to fit right in."

Page at Cannes (In Competition). Audio from the press conference. Cannes 2010: Coverage of the coverage index.