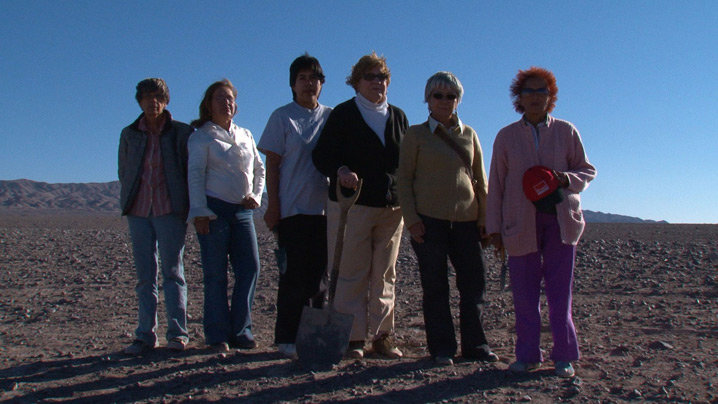 Above: Patricio Guzman's Nostalgia for the Light.

This film is so long it deserves two notes:

(1)  If you are watching an ostensibly realist film (as we understand the term in 2010), and the protagonist is mostly silent, and his quotidian encounters fail to define either his social relationships (friends, marital status, co-workers, etc.) or any details about employment or talent for specific activities, one is left remarkably adrift.  For the first hour or so of Puiu's new film, his first since The Death of Mr. Lazarescu, we learn so little of these seeming innocuous character traits in regard to the film's impassive lead character—played by Puiu himself—despite his constant movement around apartments and town, that Aurora brings to the forefront just how much audiences rely on social-cinematic conventions so normalized that their existence is rarely acknowledged.  The most marvelous thing about this movie is how undefined, without context, and practically abstract Puiu's person is in Aurora.  Without rich social interactions for context, we are unable for the longest time to determine if we are seeing the most calculated and professional man in Bucharest, or an idiotic sociopath.  At it's most basic level, Puiu's film is about how long it takes to realize quotidian mannerism are expressions of disturbed psychosis.

(2) Not a favorite but a fascination: despite being shot on a tripod, Aurora's camera wavers as unsteadily as the prototypical handheld photography of American indie cinema.  Re-framing for actor's movement is one thing, constant minute movements when there is no moving object in frame is another.  Sometimes the camerawork almost achieves a personality, anxiously becoming distracted by tiny movements whether by main characters' erratic movement or a passing stranger.  But the camerawork is not consistent in this regard, and more often than not the film simply feels permanently, amateurishly unsteady.

A moment calling back to L'Herbier's glittery fascination with decor and technology in such silent classics as L'inhumaine (1924) and L'argent (1928): Danielle Darrieux bugs her husband's separate bedroom in an attempt to record and expose his infidelities.  But when he discovers the mic she faints at his mock threat of brutality, whereupon he carefully composes the microphone, like a rose on a corpse, on her unconscious body.  When a servant exclaims that madame is dead, husband goes to the speaker in her bedroom and proves she's alive by listening to her heartbeat.

Patricizo Guzman’s Nostalgia for the Light has perhaps the best approach to tragedy: equal parts science and poetry.  To get to the lost victims of Pinochet’s dictatorship, the film comes via the route of astronomy.  It factually finds, in the Atacama desert, both the observation of the stars and the seekers of the dead, widows and family members searching for remains of the executed and disappeared.  The analogy is simple and beautiful, as the light from the stars comes from long ago, these geographically coincidental searches both look deep into a dark past.  But Guzman pointedly shows the difference,  one exploring and unearthing an ambient world to popular acclaim and awareness, and the other exploring a memory many are trying to forget, for which many are still being condemned.