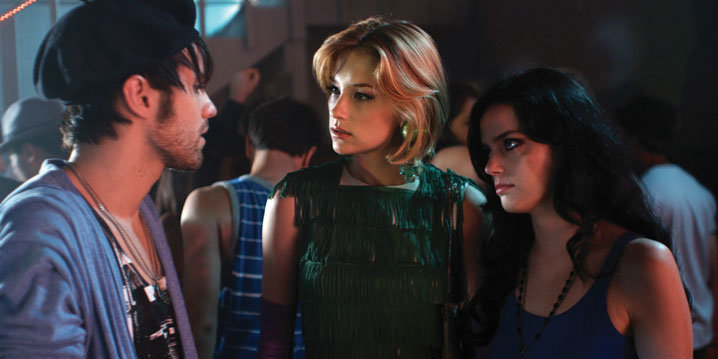 "Essentially supersizing Nowhere (1997) and relocating it from high school to college, [Gregg Araki's Kaboom] spins an insanely complicated narrative of sex, drugs, dreams, webchats, self-fellating roommates and animal mask–wearing cultists," blogs Ben Kenigsberg for Time Out Chicago, "and it suggests, in retrospect, that Araki may have been more of an influence on Donnie Darko than any other single filmmaker. A calculated shock to the more bourgeois sectors of the Cannes audience, the film also zips by with a kineticism and humor that’s been mostly in short supply this year."

Mike D'Angelo at the AV Club: "After achieving a measure of mainstream respectability with Mysterious Skin and some cult success with Smiley Face, both based on other people's material, Araki has now re-embraced the ludicrously overheated, unapologetically salacious shock comedies he made back in the 90s — which didn't sound to me like a promising development, since I found those films (Totally Fucked Up, The Doom Generation, Nowhere) tiresomely frenetic. Turns out maturity + technical skill + deliberate regression = awesome."

Guy Lodge at In Contention: "It goes without saying that the results are uneven, with the mile-a-minute gags eliciting almost as many groans as yocks, but the whole is almost endearingly spirited and unruly, while the young cast is fully committed to the cause — rising star Juno Temple, as a blasé British Lolita improbably named London, is a particular delight."

Joe Utichi, writing for Cinematical, agrees: "She's rolled into the main plot as the story progresses, but even in early scenes, where she should be distracting from the main story, she exudes a confident comedy and sexuality which is hard to ignore."

"There are a whole lot of Twin Peaks influences in the loopy conspiracy story (involving mind control and psychic powers)," notes Mark Adams in Screen, "but Araki never takes it too seriously…he is more busy having fun with his impressive cast and shooting them in various states of undress."

Update, 5/17: "It's a deliriously anarchist cinematic cherry-bomb, executed by Araki with a level of control that is simply staggering for this type of material," writes Matt Noller at the House Next Door. "He knows exactly what he's doing, and on its own terms, Kaboom is something very close to perfect."

Jonathan Crocker at Little White Lies: "It's the bomb."

Update, 5/23: Basil Tsiokos for indieWIRE: "Gregg Araki's Kaboom was announced today as the winner of the inaugural Queer Palm, awarded to an LGBT film at the Cannes Film Festival, at a ceremony held at Zanzibar, the oldest gay bar in Europe and popular with gay fest goers. Sponsored by Gallic filmmakers Olivier Ducastel and Jacques Martineau (Cote d'Azur, The Adventures of Felix), the Queer Palm joins Berlin's Teddy and Venice's Queer Lion, similar LGBT-themed awards at other major world festivals."