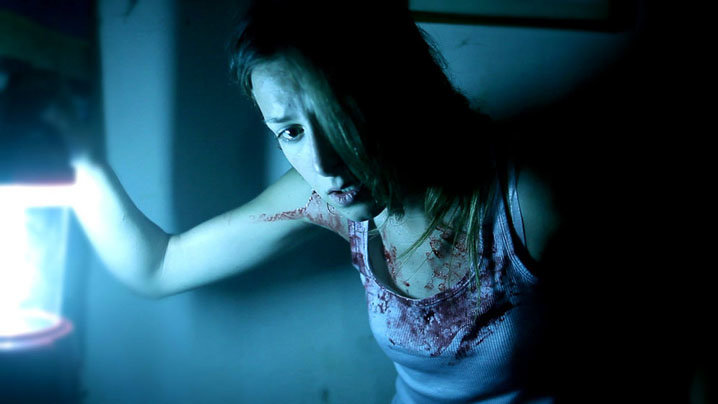 "When the trailer for the film first appeared and caused something of a cult buzz in the online community," begins Todd Brown at Twitch, "the attention was split evenly between the fact that the film was contained in a single uninterrupted shot and that what glimpses we got of that shot were remarkably cinematic — perhaps the best looking of the first-person horror films released to date. And on that level La Casa Muda delivers wholeheartedly." However, "there are some significant flaws as well."

"As basic as its title, The Silent House is about as classic a horror film as you can get," writes Deborah Young in the Hollywood Reporter. "A young woman and her father spend the night in a remote farmhouse, where a psychopath is on the loose. Shot with three actors and, hats off to Uruguayan director Gustavo Hernández and his crew, in one single 78-minute take on an HD digital camera, the tension is nonstop. The drawback to this Elle Driver pickup is a one-note story line that is a little too simplistic and guessable for audiences weaned on the flamboyant modernity of Tarantino and sophistication of Amenábar, putting a certain cap on its commercial prospects."

"If you think you've seen some amazing cinematography before, just wait until you see this," enthuses FirstShowing's Alex Billington. "The Silent House is beautifully shot, in every sense of that word, and cinematographer Pedro Luque (who shot Panic Attack) is an absolute master with the camera. He frames certain scenes flawlessly for the story's sake; I still almost don't believe that he was able to actually keep the camera positioned perfectly in every scene for a non-stop 75 minutes."

"More than just an exercise, this is a stylish, handheld house-of-horrors number, which like the best examples of the genre uses suspense rather than gore to rack up the tension," write Lee Marshall in Screen. "The resolution looks fine on a big screen even in the low-light conditions that apply for most of the film. With a budget of $6,000, this is a remarkable achievement — and one that opens up all sorts of possibilities for low-budget filmmakers with the right sort of script."