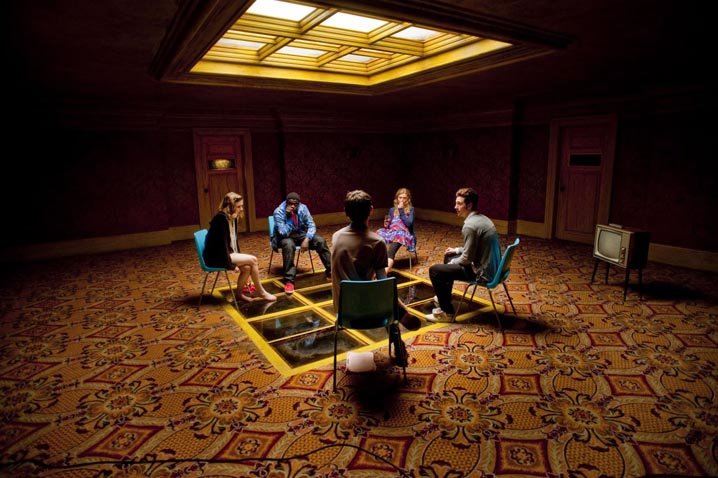 "Hideo Nakata's laughably dated Chatroom finds a quintet of annoying British teens, including Kick-Ass' Aaron Johnson, gathering in virtual reality to humiliate and abuse one another from the comfort of their individual laptops," writes Mike D'Angelo at the AV Club. "Shrill and insipid, Chatroom doesn't work on any level — the dialogue is risible, the character dynamics are preposterous, and the rise of Chatroulette makes the entire concept of a tight-knit virtual community seem like a sad anachronism. Incredibly, the film was based on a play by Enda Walsh, who cowrote Hunger with Steve McQueen; it would be hard to imagine two films with less in common."

Jonathan Romney, writing for Screen, is somewhat kinder: "A bold take on ostensibly over-familiar cyber-themes, Chatroom finds an inventive visual correlative for its psychological and sociological investigations, only to go off the rails in a rushed and bathetic climax.... Online stories are notoriously difficult to carry off on-screen, but Chatroom tries something different. Here, chatrooms are depicted as actual spaces off an eerie corridor crowded by assorted freaks.... The evocation of a seemingly more-real-than-real virtual realm echoes David Cronenberg's more overtly surreal eXistenZ, but it's a smart move of Nakata to keep his chatroom a more mundane, and indeed somewhat theatrical, space."

At In Contention, Guy Lodge disagrees: "Pitched halfway between the thrumming horror beats of Nakata's signature Ring series and a particularly overstimulated episode of Skins — it duly filches the best actress from the latter, Hannah Murray, for its ensemble, to no positive effect — the British production fails straight out of the starting-gate, with its bafflingly misguided decision to literalize the concept of online chatrooms for the screen.... I expect Nakata's equally brain-dead and cruddy-looking MySpace thriller to drop sometime around 2019."

Melissa Anderson for Artforum: "Lessons learned: Too much time on the Internet is dangerous! Don't get attached to your iPhone! Young people have big emotions! Suicide is not painless! 'Now' is the last word of Nakata's film, earnestly circulating pseudosociology that's about as current as a dial-up modem."

For Brad Brevet, this is "a tedious bore that does nothing but lay there like a dead fish." Matt Noller walked out after 20 minutes.

Page at Cannes. Un Certain Regard.