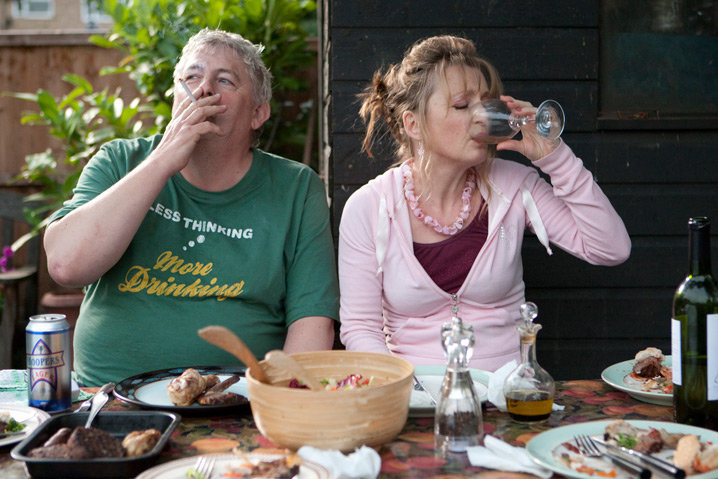 Above: Peter Wight Lesley Manville in Mike Leigh's Another Year.

Like waves crashing against a seawall, lonesome singles are drawn to but inevitably break in the face of a happy marriage in Mike Leigh’s Another Year.  Ruth Sheen and Jim Broadbent form an unusual and welcome thing in contemporary drama: a happy marriage whose basis is detailed and organic rather than caricatured and presumed.  If the couple is interesting is another question, more often than not answered in the negative.  When answered in the positive it is due to the few rumpled shades of psychology in their happy demeanor, Broadbent’s small but telling sarcastic asides, Sheen’s habit, as an analyst, to remain detached and vaguely judgmental.  But beyond that there is little nuance to their warmth, and such simply portrayed happiness, at least in film’s context, leaves a lot between them, and their content ideal, unexplored.  But while this intimate little film, made up of social anecdotes with the couple structured around the seasons, disappointingly leaves the sweet, friendly couple charming but without much beyond their placid surface, it gives near manic texture to their house and dinner guests.  Compared to that ideal, all appear unstable and unhappy. Another Year has little strict story development, and is more a series of encounters, mostly between the couple and Sheen’s lonely, single, desperate and neurotic co-worker, played by Lesley Manville with nimble mania in the face of the family’s calm, content public display.  Others come and go: a middle-aged friend of Broadbent’s (an excellent Peter Wight) too thick (in most meanings of the term) to score with Manville, and with their son, played by Oliver Maltman.  The son opens up an interesting angle to the scenario, as his closed interiority suggests that the young do not so visibly exhibit signs of their inner-contentment in their daily social manners.  All is admirably executed in regards to situational insight, but as the film remains structured on the single wave-beating idea, one finds the Another Year curl up into the stability and contentedness of its single idea much like the admirable but ultimately unsatisfying marriage at its center.