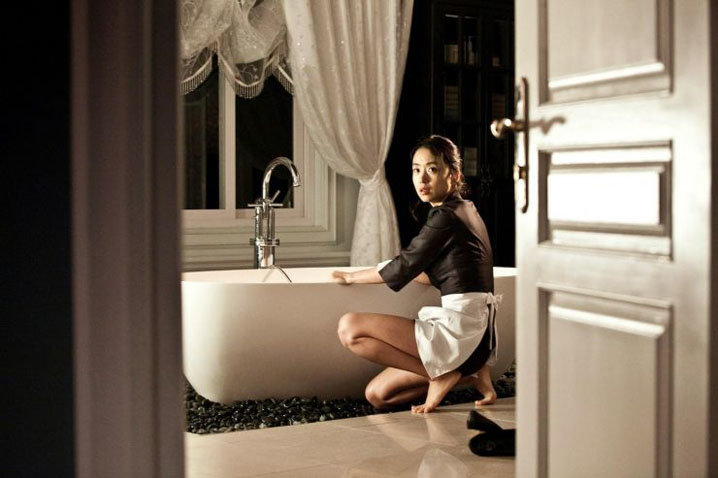 "I kept wondering what would have happened if Im and writer Kim Soo-hyun hadn't had a big fight during the production period," writes Sung So-young for JoongAng Daily. "Maybe Kim, who is known for her catty lines, could have saved the film from being dull. Kim is one of the most famous television screenwriters in Korea, and known for being a bit of a drama queen. She was hired to write the script but withdrew from the project after Im handed her a revision that she said bore little resemblance to what she had turned in. In the end, the film is neither a makjang film nor a thriller but rather an ordinary tale of adultery."

Lee Ji-Hye reports on the May 3 press conference on Seoul for 10 Asia; earlier: an April 13 screening.

HanCinema has more clips and photos; and here's the official site.

For Brad Brevet, it "doesn't entirely work, but [it] is twisted enough to keep you engaged the entire way."

"Ultra-attentive to everything from the characters' specific sexual quirks to the extravagant, Western-aping lifestyle of a certain strata of the Korean ultra-rich, Im, whose best-known previous film was The President's Last Bang, doesn't miss a trick in portraying the gamesmanship at play, and the film's look is positively voluptuous." Todd McCarthy: "It was also a provocative and smart decision to reverse the situation from the 1960 film and have the wife played by a younger and hotter actress than the one cast as the maid. The performances are on the money all around."

In the Hollywood Reporter, Maggie Lee argues that Im "deserves credit for his gutsy departure from the original, rather than doing a carbon copy 'remake' a la Gus Van Sant's Psycho. The outcome is a flamingly sexy soap opera whose satire on high society is sometimes as savage as Claude Chabrol's La cérémonie." 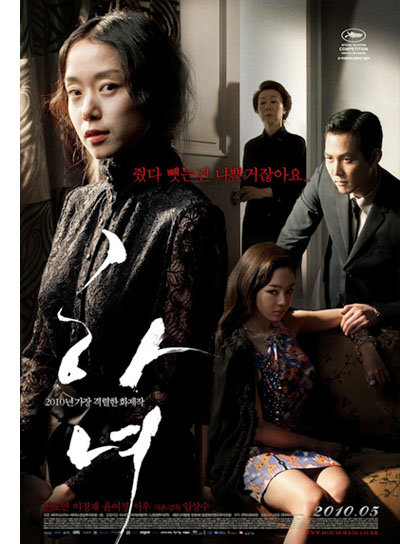 It's mostly an enjoyable suspense drama, well acted, pleasingly paced and possessed of enough subtle twists to hold the attention," writes Geoff Andrew in Time Out London. "The play with audience sympathies highlights the influence of Hitchcock, and one might even make modest claims for it as an acerbic commentary both on class divisions and on the corrosive effects of double standards on women's lives and solidarity within a strictly patriarchal society."

"Once a sexual predator, the housemaid has been transformed into a passive, infantilized victim, at the mercy of a family so ostentatiously wealthy that their living-room fireplace has an aspect ratio twice as wide as the movie itself." Mike D'Angelo at the AV Club: "Every destructive act, instead of being perpetrated by her, is now inflicted upon her, all in service of a painfully blunt treatise on the dangers of class warfare.... It's as if Hollywood were to remake Fatal Attraction, only this time, the other woman goes away quietly after a few passionate trysts, perfectly happy to be ignored, whereupon the husband and wife team up and spend the rest of the movie tormenting and stalking her, just for fun. What exactly would be the point of that, you ask? Good question."

"It's not even especially entertaining," adds Matt Noller at the House Next Door. "[T]here's no real structure or pace, and even the supposedly controversial sex scenes are too outrageously stylized to carry much subversive charge. Only in its gleefully nasty conclusion — and even more so in the hilariously nonsensical bugfuck epilogue (or whatever) that follows — does the film come to any sort of actual life."

Aaron Hillis for Moving Pictures: "Beyond a disturbing left-field ending that might be sickly alluding to how Kim Ki-young and his wife died in real life, the only other compelling tweak is the presence of veteran housemaid Byung-Shik (Youn Yuh-jung, who coincidentally starred in two of Kim's films following his Housemaid), subtly neglected by the family in her graying years, but so skilled at her job that she knows every dirty little secret under the roof. Could this embittered, equally empowered and enslaved maven lurking in the background be the central figure in the film's title?"

"The movie holds your attention, but beyond a vertiginous mise-en-scène (and a throat-grabbing, handheld prologue), the film never quite answers the question of why it exists," writes notes Time Out Chicago's Ben Kenigsberg.

Updates, 5/15: For Patrick McGavin, this is a "weird, voluptuous and thoroughly strange meditation on class and sexual warfare" that's "a rebuke of its very source."

A perhaps unexpected take from Twitch's Todd Brown: "Directed with the same icy precision displayed by the coldly amoral family at its center, The Housemaid is an entirely grown-up thriller — one driven by lust, boredom, and not particularly subtle manipulation. And the general feeling on the street is that it's also the best film to screen in Cannes so far."

Update, 5/17: "Count me as a supporter," declares Salon's Andrew O'Hehir. "[T]his intentionally lurid and overripe spectacle stands on its own as a black-comic drama in the vein of Paul Verhoeven and Claude Chabrol."

Update, 5/23: "We get it," writes Time's Richard Corliss: "Rich people are awful, and the poor their pawns. Beyond this reductive social view, though, The Housemaid has a silky thread of tension tightening around the viewer's rooting interest, right up to the unusual revenge Eun-yi chooses to take on her torturers. Lee Jung-jae has been mentioned as a strong candidate for the actress prize, but all of the principles fill their roles with subtle or preening conviction. Some distributor should pick up this sexy thriller for release in the US, to show our audiences how, when American directors have abandoned the genre of melodrama, an Asian director can shock it back to life."

Update, 6/9: "[T]he visceral qualities which made the original film a thunderous experience are now achingly trivialized and, worse, aestheticized for aimless effect," writes Jose-Luis Moctezuma in the Hydra. "The remake is a finely-crafted but hollow shell of the original; Im seems determined to invert nearly every feature which made the original film a psychic experience, rendering the new version a materialistic exposition of non-mental states better off dialogued in the semantics of a Korean television drama."

In Competition. Page at Cannes. More. And notes from the press conference.