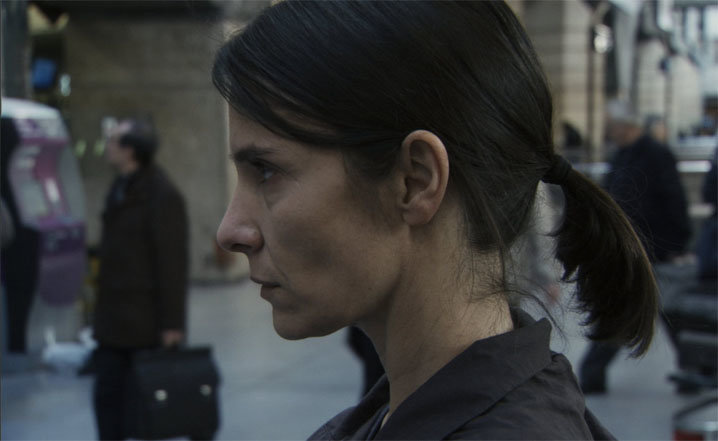 "Like his last two films, Claire Dolan (1998) and Keane (2004), Lodge Kerrigan's Rebecca H. (Return to the Dogs) is named for its protagonist," writes Dennis Lim, introducing his interview with the director for the New York Times. "The French actress Géraldine Pailhas appears as a mentally unstable Grace Slick fan named Rebecca H. and also as herself, playing an actress starring in a Grace Slick biopic — or is it a film about a Grace Slick biopic? — shot in France by a director named Lodge Kerrigan (played by Mr Kerrigan)."

"The doubling and the film-within-a-film become even more mesmerizing when the real Slick appears, in snippets from the concert docs Monterey Pop (1968) and One P.M. (1972)," finds Melissa Anderson, writing for Artforum. "Combining meticulous mimesis, metanarrative, and lengthy, Dardenne-inspired, back-of-the-head tracking shots, Rebecca H. reimagines the biopic as an exercise in giving and withholding."

"I liked this a great deal for its terseness and concision," notes Daniel Kasman here in The Daily Notebook, adding that "it is impossible to determine whether one of the film's three dramatic layers exists 'inside' or 'outside' the others."

"I enjoyed nothing about it as much I did an impassioned post-screening argument between US critics James Rocchi and Aaron Hillis," writes Guy Lodge at In Contention. "Rocchi thought it an agonizing invitation to cinephile masochism; Hillis thought it a brilliant, self-parodic hoot."

"She talks a lot in first person about her admiration in younger years for Slick, and for the French director Maurice Pialat, and about how she met the great man and even worked for him," notes Roger Ebert. "I watched it with the greatest admiration for Lodge Kerrigan, but with a falling heart. Some of the film works a scene at a time, Géraldine Pailhas is very good, but at the end of the day it doesn't come together."

"Rebecca H. reveals little not already uncovered by Truffaut's Day For Night, Godard's Passion or Olivier Assayas's Irma Vep," writes Jonathan Romney for Screen. "The film is most impressive in the Bergmanesque scenes between Pailhas and [Pascal] Greggory, especially when they play the same dialogue repeatedly with differently nuances."

"Directors who want to take their work in a more experimental direction are fine by us," blogs Steven Zeitchik for the Los Angeles Times. "It's just that when a filmmaker has the evident ability to incorporate elements of the experimental into accessible works of entertainment — Steven Soderbergh, who produced or executive produced some of Kerrigan's work, including this movie, comes to mind — there's something tragic about watching them bypass the opportunity."

"While Kerrigan certainly does take a radical approach to the biopic that has never been done before, his decision to buck conventional structure simply amounts to a drag," finds indieWIRE's Eric Kohn.

Update, 5/25: "Many potentially rich Brechtian ideas are put into play, but unfortunately few of them are endowed with enough clarity to make them cohere," finds Peter Brunette in the Hollywood Reporter.

Update, 5/28: Eric Lavallee has video from the night of the premiere.

Page at Cannes (Un Certain Regard). Cannes 2010: Coverage of the coverage index.