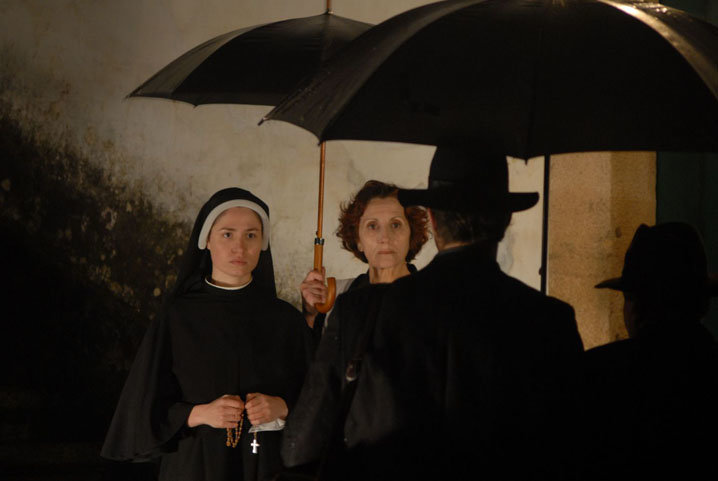 "The Strange Case of Angelica, which met with enthusiastic applause after its first press screening on Thursday, is a gift from a filmmaker who, at 101 years old, is nearly as old as cinema itself." Manohla Dargis in the New York Times: "Ricardo Trepa stars as Isaac, a photographer and young romantic who one rainy night is summoned to an estate to immortalize a beautiful bride who has suddenly, enigmatically, died. While taking the woman's picture, something happens — magical, mystical, miraculous — that sends Isaac soaring into the heavens and into deepest despair: he falls in love with the dead woman. Using a Chopin sonata that might have accompanied a silent film, as well as modest special effects, [Manoel de] Oliveira at once looks back to the past, even as his characters meditate on the current economic crisis. I can't wait to see it again."

The grades are high at Letras de Cine.

"The film's first half is executed with a finesse that could only be Oliveira, and almost entirely in visual terms, as Isaac visits the estate and muses in his shabby room," writes Jonathan Romney in Screen. "About midway, however, the film moves into more rarefied, discursive mode, as an engineer and friends muse on the economic crisis, theory of matter and antimatter and, more enigmatically, the 'seven mosquitoes of the Apocalypse.' It's one of those Oliveira sequences which pile on the obscurity, only to end on a sublime comic note as — just on the edge of the frame — a cat eyes up the landlady's caged bird."

For the Chicago Tribune's Michael Phillips, the film is "sublimely emblematic of a certain kind of picture thousands come to Cannes to regard.... Revising his never-filmed script from the 1950s, Oliveira's fable of fantastical love features some charmingly antiquated dreamlike sequences done in the silent-film style of Murnau's Faust or, further back, a fantasy by Georges Méliès. 'I presume to know a bit about life, but I know nothing about death,' Oliveira told one interviewer. 'I've never tried it.'"

Last year's Eccentricities of a Blonde Haired Girl is "a crisp, cruel fable as indebted to, say, Ophüls as his own lengthy oeuvre," writes Guy Lodge at In Contention. Angelika "drops that clear-eyed wit for a more contrived sense of quirk, but there are enough teasing digressions and non-sequiturs here to delight and provoke the faithful."

Pilar Lopez de Ayala becomes "one of the most beautiful corpses ever filmed," finds Vitor Pinto at Cineuropa. "Working for the first time with Oliveira, the Spanish actress has a silent yet strong presence throughout the entire film, spreading her fascination over Trepa's character even when she is not visually present."

"The idea for the screenplay was hatched in 1952," notes Charles Ealy at the Austin Movie Blog. "But when you live to 101, what's the hurry?"

The Guardian's Charlotte Higgins has more from the man himself: "I thought of doing the film just after the second world war. Hitler killed six million Jews in Europe and the Jews were fleeing to Portugal to fly to the States... Jews are still persecuted, as are Muslims. We also have pollution, economic crisis, heavy rains in Madeira and Rio de Janeiro. All these events have wreaked havoc; they make Isaac feel very ill at ease."

"There seems to be general agreement that longevity equals virtue, but this is true, in and of itself, neither in life nor in filmmaking," writes Peter Brunette in the Hollywood Reporter. "Angelica is vintage De Oliveira, and some will love it on those grounds alone, but it's a vintage that may have passed its prime."

"Though the story is unusual, there's something predictable about its execution," finds Matt Bochenski at Little White Lies. "Perhaps it's just that this is exactly the kind of film you'd expect to find occupying a berth in Un Certain Regard."

See, too, Daniel Kasman's favorite moments from the first two days of the festival.

Update: Matt Noller at the House Next Door: "Ultimately, watching the film is kind of like listening to your grandpa tell a rambling story; he may not connect all the dots, and you may not have any idea what the hell he's even talking about some of the time, but you enjoy the telling all the same."

Update, 5/15: This is "certainly one of the master's greatest films over his past, extraordinarily active decade," writes Robert Koehler at filmjourney.org. "My Variety review pretty much says it all, but if you can't past the paywall, let's just say that it is cinema storytelling at the level of pure grace, quietly capturing cinema's always-unresolved debate between the realist and the fantastic, the matter of whether what we see is altered by the photographic image, or whether our eyes determine the text of the image."

Updates, 5/16: "As in all recent Oliveira, everything is deceptively simple." Daniel Kasman, here in The Daily Notebook.

"In masterpieces like Satin Slipper, Francisca or Valley of Abraham, Oliveira negotiates mysterious, private worlds of grief, loss, beauty and death," writes Patrick Z McGavin. "In the end, his movies almost always turn on this philosophical inquiry into the nature of good and evil, right and wrong. His movies probe, dig into the emotional currents of the characters, creating lilting, poetic reveries on youth and beauty, thwarted desire and class stratification. The Proustian evocation of an Eden found and lost is one of his recurrent themes. His greatest film, Doomed Love, is an apt exploration of this movie's irreconcilable synthesis of the material and spiritual permeating The Strange Case of Angelica."

"Oliveira's films have never been vivacious, exactly." Time's Richard Corliss: "He prefers a steady pace and a static view, using only a half-dozen or so moving-camera shots in Angelica. The average mall moviegoer might be baffled or sedated by the film's stateliness, its dreamlike melancholy. But that's just one difference between the Hollywood action pictures the world loves and the art films that find their most rapt audiences here at Cannes. Historians of cinema all, we connect the dots between this latest Oliveira effort and his first — like that early documentary, Angelica contains scenes of Portuguese workmen singing of the Douro River — and fall into a trance no less seductive than the one that lures Isaac from this world to the next."

Update, 5/19: "The Strange Case of Angelica is a comedy in the droll, intentionally stilted, highly deliberate yet anecdotal manner de Oliveira has perfected over the past several decades," writes J Hoberman in the Voice. "The meaning of the story is the pleasure of the tale — a story told for its own sake, its narrative advanced with the expertise of a chess master pushing his pawns. Like most great avant-garde movies, Angelica is programmatically anachronistic — the special effects would have seemed primitive to Georges Méliès back in 1901."

Update, 6/9: "Cinema Guild has snatched up the US theatrical rights," reports the Playlist.

Page at Cannes. More and more.