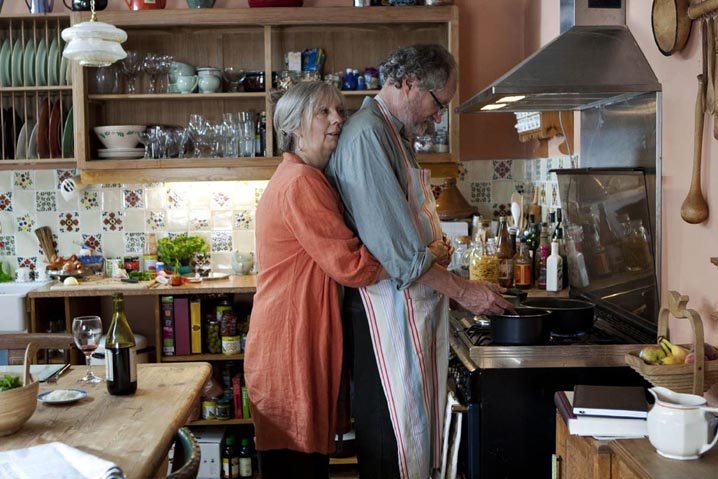 "Age, happiness and the passing of time are the themes that percolate movingly through Mike Leigh's Another Year, his first film since 2008's punchy, upbeat Happy-Go-Lucky." Dave Calhoun in Time Out London: "It's a serious, meditative but powerful drama that explores a year in the life of a contented, endearing professional couple in their early sixties and the friends and family who cross their path."

"Acutely observed but gloomy and lacking narrative, it tells of 12 months in the life of a decent but dull suburban couple and their friends, most of whom you would go out of your way to avoid at a party," grumbles Ray Bennett in the Hollywood Reporter. "The veteran British director draws typically skillful performances from his cast of mostly regulars, and there are fine contributions from cinematographer Dick Pope and composer Gary Yershon. It's a sedate film without drama that festival juries could well fall in love with, but moviegoers might decide that their own brand of misery is quite sufficient, thanks."

"In the hands of a lesser director the film might have come across as slight, but Leigh is a master of making the ordinary extraordinary," counters Mark Adams in Screen. "Another Year is a deft and thoughtful film that is deceptive in how it tackles its core subjects of loneliness and companionship. And while Tom and Gerri (Jim Broadbent and Ruth Sheen quite sublime in their warmth, ease and compassion) are the emotional centre of the film, the most striking performance comes from the ever-excellent Lesley Manville."

A few days ago, THR asked Leigh to describe the film. "No, absolutely not. Everybody will see it when it screens down there. It's about a lot of things. By the time I've spent several days down in Cannes, I will have developed some way of learning how to talk about it, but right now I haven't." Nevertheless, a pleasant-enough interview ensues — and then wraps: "What's next?" Leigh: "I am going to do a play next year at the National (Theater), which I can't tell you about."

The Playlist has a few clips.

Updates: "Audiences not endeared by the singsong cadences and nervous giggles of the strange creatures that always seem to inhabit Leigh World will find further opportunities for irritation," writes Charles Gant in the Telegraph, "and Manville's high-energy performance initially throws up the odd red flag. But, like Sally Hawkins in the director's last picture Happy-Go-Lucky, it's a real grower, powered by wonderful comic moments, jealous glances, neurotic sparks and, finally, quiet reflection. Broadbent is more restrained — much more — and his masterclass in economy unwittingly steals the film."

"The film is deliberately and distinctively low-key," writes Anthony Kaufman at IFC.com. "Nothing really happens over the course of the year, but with Mary's repeated visits to Gerri and Tom's house, along with another visitor, Tom's old friend, the slovenly and rotund Ken (Peter Wight), a quasi-conflict emerges, contrasting the emotionally-satisfied haves with the have-nots." We might "possibly long for more complexity, or contradictions, in the characters on display. And yet, this is probably Leigh's point — that what we're seeing is just 'another year,' as the title suggests, and the changes that occur in that time span are rarely profound."

Brian Brooks reports on the press conference for indieWIRE. 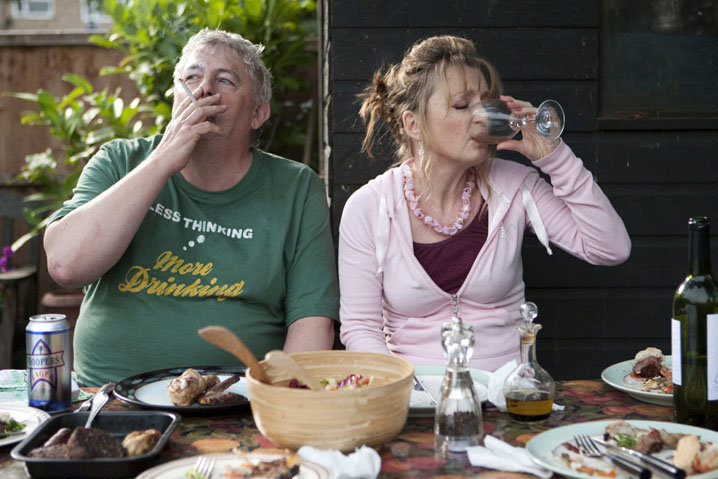 The Chicago Tribune's Michael Phillips notes that "a nagging tendency of the writer-director recurs here, that of heightening, for effective dramatic purposes, his collision of truly happy and truly unhappy human beings in the bluntest possible terms. Still, it's a fine picture, photographed with Dick Pope's usual sensitive eye for natural light and subtly suggestive interiors."

"[W]hat a randomly moving collection of troubled, romantic, confused, world-weary, stubbornly deluded souls they are!" exclaims Entertaiment Weekly's Owen Gleiberman. "The characters, between big gulps of wine, specialize in that scalding English thing, 'taking the piss' out of each other, but there's no mockery in Leigh's view, only grace. At times, the movie is like the Beatles' 'Eleanor Rigby' turned into a startlingly humane comedy."

Updates, 5/16: "Another Year turns out to be one of the filmmaker's most structurally ambitious and emotionally expansive works," writes Guy Lodge at In Contention. "Leigh's script – cast-workshopped and assembled in his trademark unorthodox fashion – deftly maintains a probing dramatic throughline while seasonally shuffling between solemn personal drama, brittle social satire and near-farcical high comedy."

"Leigh insists on building his actor's small revelations into the performance equivalent of arias: scenes that last 20 to 30 minutes," writes Time's Richard Corliss. "All the actors make the most of their time before the camera; and eventually a plot emerges, a narrative crescendo is reached. It's real life, processed for the cinema in Leigh's practiced style. But the real life it simulates is too often that of an evening that turns into an endless night, with friends one wishes might just get their coats and get out."

Jonathan Romney in the Independent: "Given that Britain's last Conservative regime perversely proved a stimulating period for socially conscious UK film-makers, I asked him whether he felt that the new Tory regime would be similarly galvanising for British film. 'That's a very Anglocentric question! If there's any correlation between the anger we feel as a result of what's happened in the last few days and the anger that is a necessary ingredient for an artist, then I dare say that that will add fuel to the fire.'"

"Leigh's outlook may have its moments of bleakness, but his latest outing finds comfort and insight in routine by existing within it," writes Eric Kohn at indieWIRE.

"[E]ven at his funniest (and it should be said that his films are often very, very funny), Leigh often devotes himself to laying bare social inequities, exploring desperate milieus, and presenting dysfunctional characters. And so, even as you applaud his art, you often also leave feeling like shit. So, including Another Year, we've decided to rank his films in ascending order of miserableness." Bilge Ebiri introduces the "Mike Leigh Miserable Index" at Vulture.

"I found it mildly disappointing," writes Mike D'Angelo at the AV Club. "That's why they call me The Wet Blanket. The problem, in my admittedly minority opinion, is that Leigh has recently started bending his characters to a predetermined theme, rather than allowing a fairly amorphous (but nonetheless resonant) theme to emerge organically from a collection of vivid characters."

Updates, 5/17: "As in Happy-Go-Lucky, which was, to its detriment, determined to break down our preconceptions about its hero, Another Year's dogged pursuit of its thesis eventually starts to feel a bit calculated," writes Matt Noller at the House Next Door. "Leigh has yet to make a bad film, and Another Year is often quite moving. But even as it draws to its legitimately heartbreaking close, it's tough not to hear the gears grinding to get it there."

It's "the film everyone I talk with loves the most," blogs Roger Ebert. "It is so beautifully sure and perceptive in its record of one year in the life of a couple happily married, and their relatives and friends, not so happy. After Vera Drake (2004) and Happy-Go-Lucky (2008), Leigh cannot seem to step wrong."

For Salon's Andrew O'Hehir, "from its title on down through the details of its execution, this film feels very much like a recapitulation of what Leigh has done before (in such earlier films as High Hopes and Secrets and Lies). This is an intimate, improvised, almost totally plotless and resolutely non-commercial exploration of middle-class English life, which in a strange way symbolizes the predicament facing auteur-oriented cinema in general and this festival in particular."

Todd McCarthy: "For me the film is obvious, schematic and lacking in interesting undercurrents or subtext."

Viewing (2'40"). Michael Phillips and Steven Zeitchik discuss the film on the beach.

Updates, 5/18: "That Manville's broad but honest portrayal can make such a pathetic person so sympathetic is a testament to both Leigh's filmmaking and her scene-stealing, heartbreaking performance," writes Aaron Hillis in Moving Pictures Magazine. "So far, she's a shoo-in to win Cannes' best actress prize." And as for the film: "At the festival's midpoint, it's so far the strongest contender in the main competition."

Update, 5/22: Another Year has won an Ecumenical Jury Commendation.

Site. Page at Cannes. More. Audio from the press conference. In Competition.