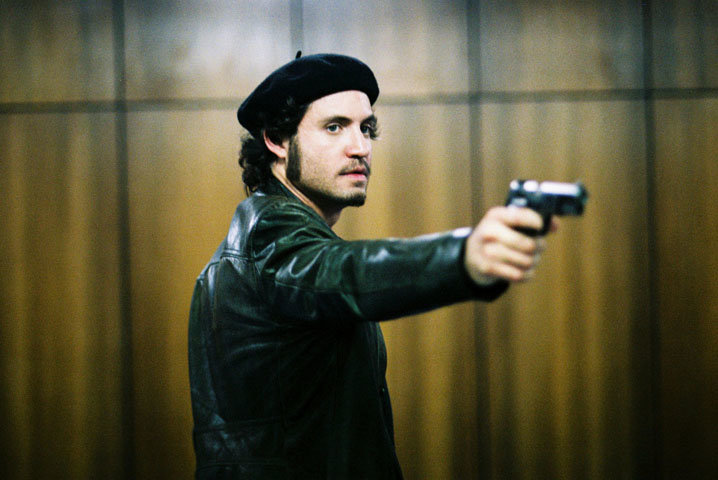 "How good is Olivier Assayas's Carlos?" asks Steven Zeitchik in the Los Angeles Times. It's a rhetorical question. "Think of The Bourne Identity with more substance, or Munich with more of a pulse, and you begin to have a sense of what the French filmmaker accomplished with this globetrotting and epic look at one man's rise to the station of international guerrilla leader and terrorist celebrity."

On the other hand, Wesley Morris in the Boston Globe: "When you're invited to spend five hours and thirty-three minutes watching a notorious Marxist revolutionary do his thing, you're hoping for something, well, modestly extraordinary. So much for that.... To be fair, the movie was made as a miniseries for French television, which is why it was being screened outside the main competition.... This is the somewhat electric movie I imagine people expected from Steven Soderbergh's more rigorous and deliberate Che, which showed here two years ago as a similar, if slightly shorter event and also had a role for Edgar Ramirez. Carlos isn't as strong, either, as Volker Schlöndorff's The Legend of Rita or Uli Edel's The Baader Meinhof Complex, which traveled similar avenues of German terrorist outfits. But Assayas is out to entertain, and maybe over the course of three nights, the film has less anticlimactic effect. Or not. After five and and a half hours, a perfectly smart movie became, in the last act set in the Sudan, an extra-strength episode of Miami Vice."

"Although Carlos spouts off now and then, invoking the proletariat as he swills Scotch and lights a cigar from Fidel's reserve, he lacks substance," writes the New York Times' Manohla Dargis. "He doesn't have much to say, and his rhetoric gets cruder as the years pass (as does his treatment of women). He's a man of action, not ideas. Mr Assayas, by contrast, is a director of ideas. And if Carlos is essentially uninteresting – it's his violence and the veneer of sexiness that violence can bring with it that makes him a star – it's because Mr Assayas has worked hard to create a new kind of movie terrorist. With his beard, beret and black leather jacket, the young Carlos is a militant pin-up. But Carlos isn't Che slogging through the jungle for the cause: Carlos is a mercenary, a thug."

"In what is certainly his best work, French director Olivier Assayas adopts a fleet, ever-propulsive style that creates an extraordinary you-are-there sense of verisimilitude, while Edgar Ramirez inhabits the title role with arrogant charisma of Brando in his prime," writes Todd McCarthy. "It's an astonishing film.... Among so many other qualities, one element hat vividly pops out from the film's vibrant fabric are the numerous scenes in which government officials from Arab and Eastern bloc countries directly order, sponsor or otherwise facilitate terrorism and mayhem in other nations.... I can't recall ever seeing scenes quite like these in any movie, and they are bracing. One can only assume Assayas and co-screenwriter Dan Franck, working from an original idea by producer Daniel Leconte and with the assistance of historical advisor Stephen Smith, have done scrupulous homework where such matters are concerned.... Carlos enters deep and dangerous waters as it takes on biography (of a still-living figure), international politics, terrorism, history, religion, sex and much more and handles all the issues with staggering dexterity, intelligence and skill. It's terrific."

"Carlos could have stepped out of an espionage thriller, and in a way he did," writes Time's Richard Corliss. "The nickname bestowed on him came from Frederick Forsyth's 1971 novel The Day of the Jackal, about an assassin hired to kill Charles de Gaulle. Later the Carlos legend inspired elements in Tom Clancy's Rainbow Six and Robert Ludlum's Bourne novels.... He's been the subject of a Mexican film, Carlos el Terrorista and an American picture, The Assignment, and is dealt with at length in Terror's Advocate, Barbet Schroeder's documentary about radical defense lawyer Jacques Verges. Now he gets his own international epic — which, on sheer movie terms, is the grandest, most vivacious entry at Cannes."

In the London Times, Charles Bremner reports that Carlos himself "took to the airwaves from his French prison yesterday to vent his wrath." The film gets it all wrong, he's claiming, and Bremner chalks up the ways.

Updates: "Compellingly serious, Carlos presents us with a very different era, politically and culturally, but never adopts the somewhat ironic, stylised attitude to the recent past that marked Mesrine and the 2008 German film The Baader-Meinhof Complex," writes Jonathan Romney for Screen. "Carlos ultimately comes across less as a character study than as a history lesson in the best sense, and proves one of the most achieved docu-fiction undertakings in recent cinema."

"Certainly, the film doesn't feel anything like television," writes Geoff Andrew in Time Out London. "It's shot in Scope, boasts the fleet way with narrative, camera movement and cutting that are characteristic of Assayas at his best and has a sense of scale, depth and seriousness of purpose that is esssentially cinematic.... It's just a pity that the third and final part runs out of steam a little; having combined intelligent political discussion with some gripping action sequences during the first three and a half hours, Assayas finds himself constrained by history itself, as the last act becomes a matter of Carlos simply moving from hiding place to hiding place until his inevitable capture."

Fabien Lemercier at Cineuropa: "This vast work, which doesn’t always keep up the same pace and often neglects to go into details, is nonetheless a spectacular and compelling film, worthy of the legend that Carlos strove to create."

"I don't much like biopics unless they're doing something genuinely radical with the form, which Carlos quite frankly does not," writes Matt Noller at the House Next Door. "So there's a lot of dutiful information-delivery and this-happened-then-this-happened dramaturgy. But unlike rote hackwork like Ray or Walk the Line, Carlos has an honest-to-goodness director with an honest-to-goodness artistic sensibility behind it. Assayas's camera movements are elegant as always, as are his striking, unshowy compositions. He punctuates scenes with time-collapsing, oddly unsettling fades to black, and modulates energy and rhythm with typically impeccable music cues. And his action sequences are constructed with a plasticity and spatial coherence that Hollywood could learn a lot from."

"Great narrative works require drama," writes Mike D'Angelo at the AV Club, "not merely a recitation of events, and while Carlos's professional life inevitably reflects the enormous historical upheavals surrounding the end of the Cold War, the movie doesn't make much effort to employ his psyche as a geopolitical microcosm. It just doggedly lays out everything that happened, beat by beat.... I'll be curious to see how the three-hour cut plays, but I'd also be perfectly happy to see the OPEC raid refashioned into a 90-minute masterpiece of its own."

Patrick Z McGavin: "The nervy, constantly unpredictable French director has created a visually sophisticated movie that informs every frame with a tactile detail and emotional intensity." 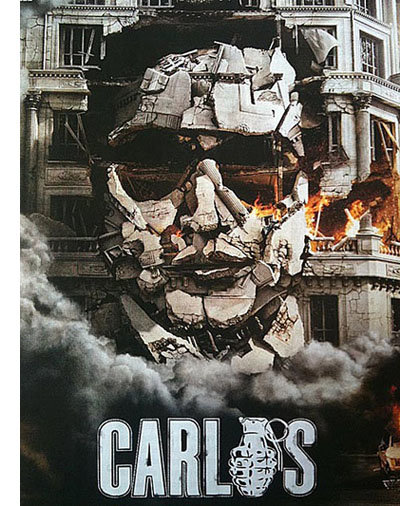 "Carlos is a controlled tumult, not unlike Assayas's thrillers demonlover and Boarding Gate," blogs the Voice's J Hoberman. "Destined for an American opening, most likely by way of the New York Film Festival, Carlos is gripping stuff, despite its incongruously fashionable rock soundtrack and a grossly over-played final section. The extended account of the OPEC caper includes the festival's best hour of filmmaking this side of Godard's Film Socialisme and would make a terrific movie in its own right."

"The horsetrading and realpolitik — the Soviet bloc bankrolled Carlos's cells in cahoots with Libya and Syria — is startlingly, darkly funny," writes the Telegraph's Sukhdev Sandhu. "It may not get to the heart of Carlos (was there was one?), and it may not add more to our psychological or philosophical understanding of terror movements than we already know, but it's a hell of a ride."

"Since Carlos is primarily a television piece, you could say that convergence has come to loom large in Cannes at last," suggests Sight & Sound editor Nick James.

Updates, 5/22: The NYT's Manohla Dargis "was surprised to learn it had been shot on 35 millimeter film.... Film was part of why we loved the movies. And now that it's disappearing we have to ask what remains."

Steven Zeitchik for the Los Angeles Times: "'I did not want to make Carlos. It seemed too crazy and too complicated,' said Assayas during an interview in a Cannes restaurant two days after the film premiered. 'It just happened to me.'"

Update, 5/24: "It is a tremendous achievement that shines a light on the way many countries use criminals to further their domestic and international goals," writes Ray Bennett in the Hollywood Reporter.