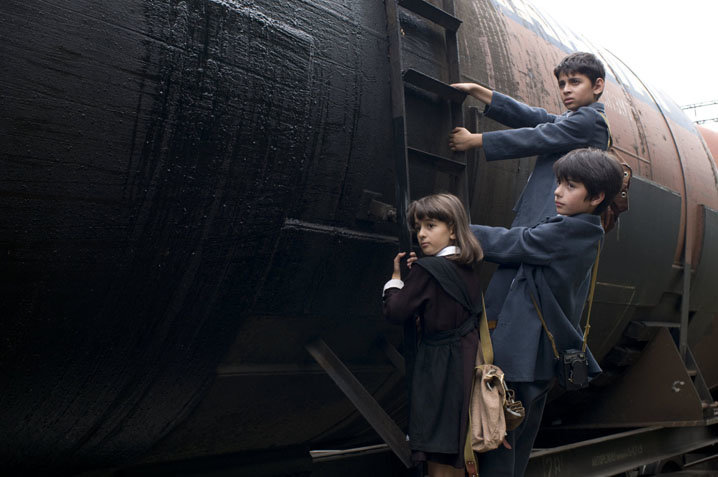 "Welcome to the private, whimsical world of Otar Iosseliani," begins Dan Fainaru in Screen. "Access permitted only for those who share his constant thirst for any liquid containing alcohol, the stronger the better, for his ironic outlook of the world around him and his immense sympathy for the human race, despite its countless shortcomings.... Unbelievers would better stay away, for they will never quite grasp the spirit of this satirical sketch, autobiographical to be sure, though, as Iosseliani himself points out, reflecting not only his own past (he claims to have been luckier than the film's hero), but that of many others, from Alexander Askoldov to Andrei Tarkovsky."

"Chantrapas, a battle cry for independence, is set during his childhood," notes Joan Dupont in the New York Times. "The story goes from the filmmaker's family home in Tbilisi to Paris, to his delirious free filmmaking years. In the movie's Georgia, parents hit children, and kids get back at them — it looks like stormy weather all the time.... Chantrapas is a Russian expression derived from the French words for 'won't sing.' It became a noun designating those who resisted the regime, the outcasts. In the film, Nico (Dato Tarielashvili), a young director, has to leave Tbilisi for Paris, which he sees as a haven for émigrés. 'The film is about happiness,' Mr Iosseliani says. 'And how to be true to oneself, resist corruption.' It is also about exile."

"Although Nicolas' experiences echo Iosseliani's own life as a director whose works were banned in his native Georgia, prompting his emigration to France, it would be way too simplistic to see the drippy and disgruntled protagonist as the master's alter ego," writes Maggie Lee in the Hollywood Reporter. "It is obvious that the director wishes to make a universal observation on how an artist survives in the world, while simultaneously parodying his self-importance.... Iosseliani also keeps artistic distance by making the time period non-specific, vaguely pre-Glasnost. More importantly, he does not takes sides, showing how the Communist officials express appreciation for Nicolas' film even when they are required to ban it, while the French producers are more authoritarian — especially in the scene when Nicolas enters the editing room to find the floor piled with outtake film which they have sliced contemptuously."

Page at Cannes (Special Screening). Audio from the press conference. Cannes 2010: Coverage of the coverage index.