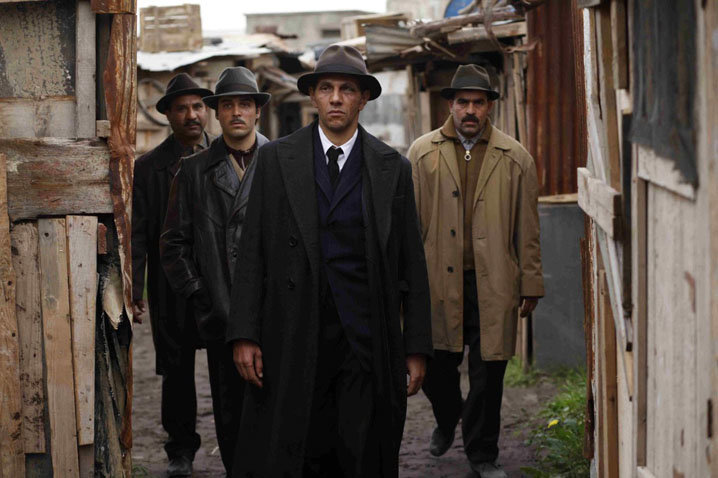 "French riot police thronged the Croisette this weekend during the premiere of the Algerian epic Outside the Law," reports Charles Ealy for the Austin Movie Blog. "People attending the Cannes Film Festival were subjected to thorough bag searches and confiscations of liquids as police with shields lined the streets, trying to prevent about 1,000 protesters from reaching the screening at the Palais. The protesters waved French flags and sang the national anthem. The dispute erupted because of the movie's portrayal of events in Algeria in 1945, during French rule of the northern African nation."

Rachid Bouchareb, "a French-Algerian auteur, said he was dismayed by what he saw as an ill-informed fuss," reports Mark Brown for the Guardian. "'I'm surprised because this film is meant to open a calm debate, not a battleground. We need to lance the abscess, we need to have a calm debate about what happened so that we can move on to something else.' One central scene is a recreation of the Sétif massacre in 1945, where French soldiers and policemen are seen gunning down hundreds of innocent, panicking Algerians. There are also scenes in Paris when Algerian suspects are beaten up and murdered by the police. It would be hard to deny that any of that took place. But there are also scenes where you flinch at the ruthless zeal of the Algerian independence movement, the FLN."

"It's not every film that is attacked by not one but two members of French Prime Minister Nicolas Sarkozy's political party who recommended that Outside the Law be pulled from the festival," notes Kenneth Turan in the Los Angeles Times. "Once the film was screened, it turns out, not for the first time, that the politicians were dead wrong. Though it makes excellent use of the events leading to Algerian independence as a setting, Outside the Law is first and foremost a potent piece of filmed entertainment. Starring three of the four actors who starred in Bouchareb's Oscar-nominated Days of Glory as a trio of Algerian brothers who get caught up in the struggle for independence, this is a kind of Once Upon a Time in the Revolution, a film that adroitly puts Hollywood epic style at the service of compelling Third World subject matter."

This is "a fierce historical tale with Jean-Pierre Melville's 1969 resistance film Army of the Shadows written all over it," finds Dave Calhoun in Time Out London. "The background of Outside the Law may be historical — we move from 1925 to 1962 over the film's two-and-a-bit hours — but Bouchareb adopts a strident perspective by inventing the characters of three Algerian brothers, who we first meet as they're thrown off their land as children in the 1920s.... The film takes flight and fully enters Melville territory in the late 1950s, when we settle into a period when Abdelkader [Sami Bouajila] becomes a leader in the Paris branch of the FLN, Messaoud [Roschdy Zem] joins his brother in the resistance movement and the less political Saïd [Jamel Debbouze] graduates from running prostitutes to running his own cabaret club and promoting boxing fights. It's the cold lack of glamour of Melville's 1969 film about the French resistance that Bouchareb successfully co-opts as Abdelkader becomes a steely underground operator, prepared to turn on other Algerians — and perhaps even his family — if it's for the good of the movement.... As a thriller and drama, it's a marked improvement on Days of Glory."

"Critics looking for a companion piece to The Battle of Algiers will be scornful of the formulaic conventions adopted here, but that audience-friendly melodrama will help it reach a wider French audience when it opens on Sept 22," writes Mike Goodridge in Screen. "The tone is more like The Godfather than a heroic WWII resistance movie or rousing historical epic (Malcolm X, Michael Collins) and Bouchareb spends a lot of screen time showing how the covert organisation is built up, murders committed and revenge taken in true Corleone style."

"As it turns out, previous knowledge of Days of Glory isn't necessary to enjoy Outside the Law, since it's not actually a sequel at all but a sort of thematic follow-up," writes Matt Noller at the House Next Door. "What is necessary in order to enjoy Outside the Law is a hearty appreciation of cliché and preachy hand-wringing.... Their story plays out via plot points and dramatic beats stolen straight from The Godfather and Army of Shadows, minus any of the traits that make those films such enduring masterpieces. Where they're fluid and graceful, it's clunky and bombastic. Where they're suggestive and haunting, it's ham-fisted and didactic. And where they're long for a purpose, it's just plain long, stretching its thin dramatic material out over scene after redundant scene."

"Outside the Law delivers, besides pure action, an informative story about the art of the FLN's war ('repression always serves the cause of people who want liberation'; 'strike again and again, strike until the enemy is on the edge') and the escalation in the means used (including on the police side with Bernard Blancan as a hunter of 'terrorists')." Fabien Lemercier at Cineuropa: "Propaganda and recruitment among the Renault factory workers and in the shanty towns around Paris, elimination of rival movement MNA, collection of revolutionary tax, targeted murders of policemen, money-filled suitcase carriers and delivery of increasingly powerful weapons: this plot interspersed with TV and radio archive footage looks at the ambiguities of armed conflict."

Update: "Critics on the Croisette have come down rather hard on the film, which is certainly a more middlebrow proposition than the Competition favorites, and considerably more lacquered than London River, the director's underseen previous feature," writes Guy Lodge at In Contention. "But I found much to commend here: Bouchareb's screenplay is a tad speechy and overextended, but the straight-arrow storytelling is as stirring as it is old-fashioned, and the filmmaking is of the highest caliber, with DP Christophe Beaucarne lending proceedings a rich gilt sheen."

Update, 5/23: "This is the one competition film I simply couldn’t sit through, so ham-fisted, obvious and simplistic is it," blogs Todd McCarthy.

Update, 5/24: "Outside the Law is more smoothly directed than [Days of Glory], though the script by Mr Bouchareb and Olivier Lorelle consistently defies plausibility," writes Manohla Dargis for the New York Times. "Mr Bouchareb also continues to maintain an unfortunate weakness for Jamel Debbouze, a comic and actor who is popular in France, but cannot bear the heavy dramatic weight his director has again placed on him."