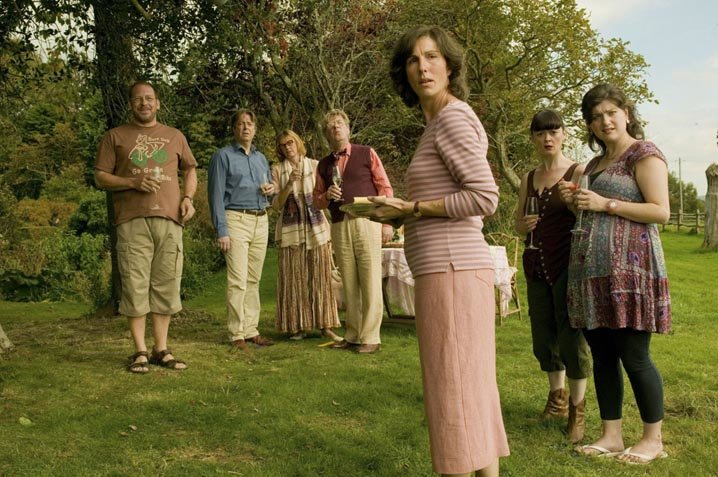 "Sassy, slick, slight and speedy, Stephen Frears's Tamara Drewe explores the same territory as Woody Allen's similarly out-of-competition You Will Meet a Tall Dark Stranger — the heart is capricious, and fate is cruel — while skewering both urban pretentions and rural rumor-mongering." James Rocchi at IFC.com: "Frears's adaptation of Posy Simmonds's highbrow graphic novel kicks off when a writer's retreat in Dorset is disrupted by the return of the title character (Gemma Arterton) who's come back from London a newly minted celebrity (with a newly purchased nose) to spiff up and sell the family estate."

Dorset's populated with "characters borrowed from Hardy's Far From The Madding Crowd," notes Mike D'Angelo at the AV Club: A "philandering middle-aged popular novelist (Roger Allam) and his long-suffering wife (Tamsin Greig); the shy hunk who dumped Tamara back in the day (Luke Evans); the obnoxious rock star she's shagging now (Dominic Cooper); two hyperactive teens obsessed with the rock star to the point of near-apoplexy (Jessica Barden and Charlotte Christie); an American academic writing a book about Hardy (Bill Camp); and a gigantic herd of cows.... Those allergic to whimsy are advised to steer clear, but everyone else will likely echo the remark I made to a colleague on the way out, one rarely heard at Cannes: 'Well, that was fun.'"

"Arterton plays a music journalist writing for the Independent (of all papers)," notes Geoffrey Macnab — in the Independent. "Frears shows the British countryside in rose-tinted fashion. It never seems to rain. The houses all have thatched roofs. Even the hens are photogenic.... In its own quaint fashion, Tamara Drewe is likeable and funny enough. The tone, though, is very uneven. The inane humour and jokes about the differences between country and city life eventually begin to grate."

Frears "will be 69 in a few weeks," notes Time's Richard Corliss, "and he's been making films since 1969, alternating quirky Brit indies (Gumshoe, My Beautiful Laundrette, The Van, Dirty Pretty Things, The Queen) with higher-budget star vehicles for American actors (Michelle Pfeiffer in Dangerous Liaisons, Dustin Hoffman in Hero, Julia Roberts in Mary Reilly). Frears's films are exactly as good as their scripts; he's one of the last and most honorable directors for hire. And here he has a witty, twisty script by Moira Buffini... I find it hard to avoid the word delightful, so I won't, for the movie is a capricious, delicious delight."

It's "insubstantial but highly enjoyable," finds Matt Noller at the House Next Door. "Its emotional punch is limited to a loving empathy for the boredom of growing up in the small town, but I was also oddly moved by its implicit defense of intellectualism and personal expression as essential aspects of art."

"An engagingly modest affair," adds Geoff Andrew in Time Out London. Joe Utichi in Cinematical: "After heavier work, it's a rather frivolous distraction for Frears, but a worthy one, and most of all it's riotously funny." For indieWIRE's Eric Kohn, Frears "manages to improve on the source material by putting its dark satiric edge in the spotlight." Three stars from the Telegraph's Sukhdev Sandhu.

"Cinematographer Ben Davis also makes the heaths, woodland and vale plus the cottages in the county of Dorset look ravishing enough to please Hardy himself," writes Ray Bennett in the Hollywood Reporter. "Alexandre Desplat's agile score employs gifted soloists along with the London Symphony Orchestra to help paint the pretty pictures."

THR interviews Frears; the Guardian's Charlotte Higgins talks with him, too, but also with Simmonds.

Update: "It's fashioned as a star-making vehicle for one-time Bond girl Arterton, and she does her bit by frolicking around in barely legal denim hotpants, but her rigidly unsympathetic character is something of a dramatic vacuum at the center of the film," writes Guy Lodge at In Contention. "The rest of the ensemble is game – Dominic Cooper as a preening, guyliner-caked rock star particularly so – but the banter isn't quickfire enough to make a choux-pastry piece like this fly. As frilly Frears-coms go, I'll take Chéri over this, if you please."