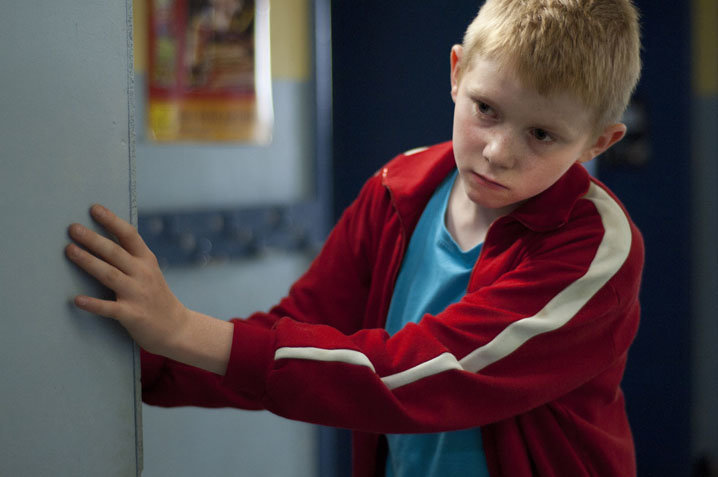 "As movie titles go, The Kid with a Bike could hardly be more direct and explicative in its unadorned simplicity," writes David Rooney in the Hollywood Reporter. "Which is a perfect encapsulation of any film by the resolutely unshowy maestros of humanistic portraiture, Jean-Pierre and Luc Dardenne. Back at the festival that has already crowned them with two Palmes d'Or (for Rosetta in 1999 and The Child in 2005), the Belgian siblings are again at the peak of their powers in this impeccably observed drama."

Glenn Heath Jr at the House Next Door: "An enduring drive propels 11-year-old Cyril (Thomas Dorset) to ignore the writing on the wall that his young father, Guy (Jérémie Renier), has indefinitely left him to the care of a state-run facility. The opening sequence introduces Cyril's durability and directionality, as the boy escapes and heads toward his now abandoned apartment looking for his father and beloved bike. This trend of catch and release continues throughout The Kid with a Bike — Cyril running or riding away from places he hates for those that might represent home. His struggle is consistent, with every scene dedicated to Cyril outmaneuvering adults and roaming from one father figure to the next."

"'Don't be upset if it's not the way you dreamed it should be,' warns Samantha (Cécile de France), a kind-hearted hairdresser who generously agrees to watch Cyril on the weekends, hardly realizing what a handful the boy can be." Peter Debruge in Variety: "But her intuitions prove correct: Cyril's dad, a weary-looking lout played by Dardennes regular Jérémie Renier (who made his debut in the brothers' La Promesse, which might just as easily have been called The Kid with a Motorbike), wants nothing to do with his son. Now, all that leftover aggression needs an outlet — an idea that fuels the remainder of the film, as the poor, wound-up kid acts out in various ways."

Writing for indieWIRE, Boyd van Hoeij suggests another angle on Renier's presence: "One could almost imagine this being The Child: Ten Years Later." Even so, he lists the ways The Kid with the Bike differs from previous films by the Dardennes. It's "unusually short" (87 minutes) and "was shot in summer, a first for the directors. The production design, until now always completely functional and almost colorless, here favors saturated, almost gaudy hues both indoors and out, where lush summer-time greens dominate. There are also some brief snippets of a quasi-religious classical score that punctuate the proceedings." What's more, Samantha's "consistently sunny, Mother Teresa-like disposition might be a tad much for lovers of bleaker fare."

Barbara Scharres, for example, blogging for the Chicago Sun-Times: "Samantha is so good, patient, understanding, and forgiving, she's the mom nobody in this world ever had. I think of the cautious relationship between the carpenter and the boy in The Son, and it seems so much more grounded in the realities of human interaction."

Still, the Playlist's Kevin Jagernauth finds that "Doret and De France each give individually strong performances — he with so much rage in his tired eyes and fatigued face, she with her ramrod-straight back and the strength of her visage which never flinches from the worst Cyril has to offer. But together, their chemistry is organic and instinctive, and wholly powerful. You understand exactly why Cyril remains loyal to Samantha, but more, De France conveys enough through her actions to make her reasons for taking in the young child understood, though never verbalized."

Jonathan Romney in Screen: "After the slightly sub-par Lorna's Silence (2008), the brothers are back on peerless form with this story of innocence betrayed and befriended, which must count as one of the best films about childhood since Kes — or for that matter Bicycle Thieves, to which it surely nods."

"This is another gentle triumph for the brothers," agrees Drew McWeeney at HitFix.

And here are two more clips with English subtitles: 1, 2. The trailer, without subtitles, can be viewed in that Cannes trailers collection gathered in the run-up to the opening of the Festival. So far, the grades for The Kid with the Bike at Micropsia are pretty high.

Updates: At the AV Club, Mike D'Angelo find the Dardennes "very much in their wheelhouse, recalling bits and pieces of not just Rosetta but also La Promesse, The Son and L’Enfant (The Child). Obviously, there are worse films to resemble, and I remain in awe of the Dardennes' willingness to commit wholeheartedly to dislikable protagonists — Cyril is a sullen, selfish, almost maniacal little runt, with a cuteness quotient of zero. All in all, this is my favorite Competition film so far. Ultimately, though, it’s just too familiar to feel truly exciting."

4 out of 5 stars from Geoff Andrew at Time Out London: "The marvelously nimble, fleet pace perfectly suits the adolescent, often desperate energy of Cyril's search for stability, while once more the narrative embraces both naturalism and something more mythic, even Biblical; this, after all, is a tale of crime and punishment, longing and disappointment, love, hatred and forgiveness. But in the end it's probably best to forget such contextual stuff, as the film is primarily about people. See the sheer fear on Renier's face as his character confesses that he just can't cope any longer with looking after his own son. At this point, about half an hour into the story, the power, subtlety, enduring relevance and absolute truthfulness of the Dardennes' latest immediately become brilliantly clear."

Movieline's Stephanie Zacharek: "I've never been sold on the Dardennes — I generally find them too mannered, too persistent and deliberate in their efforts to make us feel something — and Le Gamin au Vélo hasn't changed my mind. The picture is a bit wispy, somewhat wayward in both its emotional and narrative focus. But it does have a few moments of grace, and its young star, a kid named Thomas Doret, has some critics murmuring about the possibility that he could win the Best Actor award here next week."

For the Telegraph's Sukhdev Sandhu, "the Dardennes have created a wholly gripping, emotionally acute work of humanistic cinema." And he's in tune with those murmurs: "Without perfect casting, the Dardennes films would never work…. Doret is fantastic: truculent, sometimes unreachable, and yet with a yearning to be taken under someone's wing."

Updates, 5/16: First, a bit of listening (11'15"). The Film Society of Lincoln Center's Gavin Smith and Scott Foundas tell Eugene Hernandez why they consider Bike to be one of the best films of the Festival.

"As ever with the Dardennes, the realism coexists with some baffling unrealities," finds the Guardian's Peter Bradshaw. "The motivation of Samantha is sketchily presented, and as in their previous film The Silence of Lorna (2008), the directors display an almost childlike belief that when you hit someone over the head with something hard, the victim will fall conveniently unconscious and immobile and then recover, completely, about twenty minutes later: it's a convention I remember from 60s and 70s TV cop shows, and one I thought had long since become obsolete. So there are flaws, and yet the Dardennes' tough, spare, almost haunted storytelling style was much in evidence."

For Karina Longworth, blogging for the Voice, "11 year-old Cyril is in some ways the über-Dardenne protagonist, his youthful tendency to self-delude and inability to logically assess consequence making him the ideal test subject for the filmmaker's ongoing interest in the process of consciousness."

"Cinematographer Alain Marcoen's camera flows alongside the characters, but never in a way that focuses your attention on technique," writes Salon's Andrew O'Hehir. "The Dardennes borrow plot twists and narrative beats from the world of thrillers, but invest them with a tragic potential we rarely see in actual thrillers." He also notes that "the Dardennes have never brought a film to Cannes without winning something. I suspect this one won't garner their third Palme d'Or, and it may take critics some time to appreciate how subtle, and how terrific, it is."

Melissa Anderson for Artforum: "Though the structuring of the Dardennes' latest seems both too schematic and haphazard, their young star, in his first screen role, joins the most impressive on-screen talents seen at Cannes this year: those who are years away from getting a driver's license."

Updates, 5/17: For Time Out New York's David Fear, "it's undeniably a slight slice of humanism whether you stack up against the greatest Dardenne hits or take the movie on its own merits, especially once Doret's feral youth falls in with the local dope dealer and gets coerced into some illegal doings. The soulfulness is there, but the usual aesthetic rigor isn't, which makes all the difference in terms of their metaphysical modus operandi."

"If the film, despite its many quiet, unromantic virtues of craft and concept, is less urgent or wrenching than the brothers' best work, the fault may lie with the character of Samantha," suggests Guy Lodge at In Contention. "De France's dryly warm performance balances that of her squirmy young co-star nicely, but the Dardennes' script is missing a few beats in terms of Samantha's motivations: having no foreknowledge of her background, relationship history or possible long-term desires make her markedly quick, unquestioning acceptance of Cyril into her life a narrative convenience when it could be a more resonant act of character."

For Daniel Kasman, Bike represents "a marked improvement over the over-construction and unearned ending of L'enfant and the general flatness of Lorna's Silence."

Updates, 5/19: The Dardennes "give new meaning to the term motion picture," writes Ronald Bergan at Bright Lights After Dark. "Their protagonists are continually on the move, with the camera following doggedly behind them, as if the directors are trying to keep up with them to see that they don't get into any mischief…. What concerns the directors are the underlying forces that influence the actions of their marginalized working-class characters, often caught up in inextricably difficult situations…. [I]t's a tribute to the Dardennes that Le gamin au velo is always involving and is ultimately as much an 'emotion picture' as a motion picture."

Meantime, at indieWIRE, Dana Harris reports that Sundance Selects has acquired all US rights.

Update, 5/20: "Though it shares Le Havre's sunny conclusion, The Kid With a Bike is a movie that believes less in miracles than in the occasional existence of good people." Mary Corliss for Time: "The Dardennes, masters at filling physical space with stark emotions, balance this hopeful vision with the dark truth that children are easy prey for life's real villains, the people who can so cunningly exploit kids."

Update, 5/21: The Belgian seaport town of Seraing is "terrain they have now mapped as extensively as Monet did his garden at Giverny, and yet, like the master painter, they keep finding new stories to tell — simple, unadorned human stories that carry a universal resonance." The Film Society of Lincoln Center's Scott Foundas introduces an interview with the Dardennes, in which they talk "about their new film, their career-spanning themes, and working in the shadow of Clint Eastwood." (37'24").