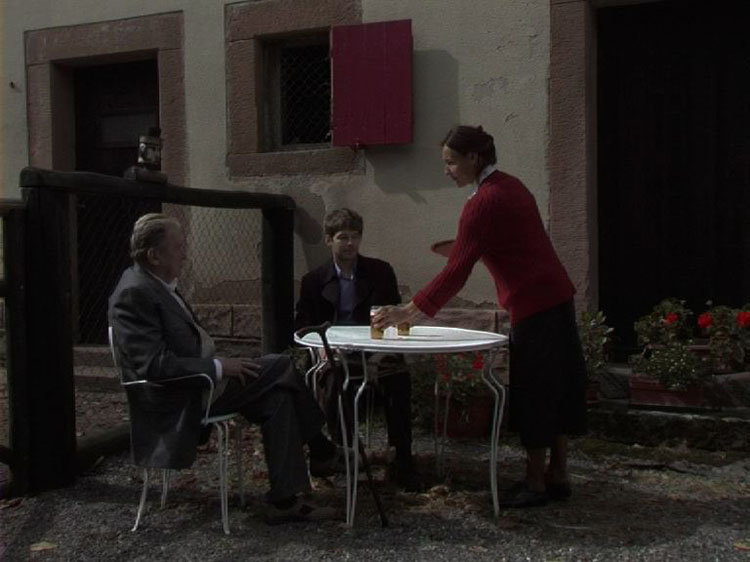 Every year since 2000, the Jeonju International Film Festival has commissioned three short works for its Jeonju Digital Project and, about a month ago now, the festival announced it'd selected Raya Martin, Vimukthi Jayasundara and Ying Liang for this year's edition (you may remember the three directors' video messages). The 2011 films are still making the rounds, and in fact, when they screen tomorrow at Exit Art, two of them — Claire Denis's To the Devil and José Luis Guerín's Memories of a Morning, both 45 minutes — will be seeing their NYC premieres. The third is Jean-Marie Straub's An Heir (22 mins, image above). If you're planning on being there, you'll want to read Robert Koehler's dispatch from Locarno last summer, touching briefly on the Denis and Guerín films but really digging into the Straub.

Reading. "With the main focus on African and Asian cinema and documentary film, Camera Lucida no 7 also contains various enriching views on the politics of cinematic re-presentation," writes editor Maja Bogojević, introducing the new issue. "Ronald Bergan's illuminating text, 'How Cinema Lost its Soul,' poignantly argues that, in the age of the digital revolution, cinematic art needs to be redefined and repositioned by reference not only to the history of cinema, but to the wider field of art history; in 'A Woman's Face,' Ronald Bergan, further, highlights the use of female close-ups, from Pabst's Pandora's Box to Kiarostami's Shirin, as constitutive of the syntax of the film style, but also discusses the reasons why such film syntax has been neglected since 1960s; Victoria Pasley, in her two texts, analyses how Abderrahmane Sissako's two films La Vie Sure Terre and Heremakono draw on the local environment and its inhabitants to create a distinctive architecture with which to articulate larger questions such as the devastating legacy of colonialism, the unequal relationship between Africa and Europe, and the impact of globalization."

Girish Shambu shares his thoughts on the evolving state of the video essay as a form of film criticism and issues a call for any you might find "particularly interesting or illuminating or useful."

Adam Rothstein for the New Inquiry: "Slow Politics is a new way of communication, and — in a deliberately decelerated way — a building of revolutionary community through technology."

For Fandor, Brian Darr traces the making and re-making of Georges Méliès.

Kurt Jensen, who's writing a biography of Rouben Mamoulian, in the Los Angeles Review of Books: "While Mamoulian may be best remembered for directing the original Broadway casts of Oklahoma! and Carousel or Hollywood classics like Love Me Tonight and Silk Stockings, it could be argued that he had more to do with the evolution of Porgy and Bess than any other single artist, excluding, of course, the opera's composer. His influence on Porgy and Bess is often under-emphasized, which is perhaps inevitable when one works with a genius such as George Gershwin."

J Hoberman dedicates his first post at ARTINFO to the fellow who got him into the Film Comment Selects screening of Kenneth Lonergan's Margaret. And Eugene Hernandez hears that the "DVD in May will include a directors cut; not finished for theatrical."

In the works. Bruno Dumont begins shooting his Camille Claudel with Juliette Binoche and Jean Luc Vincent next week in the French region of Provence-Alpes-Côte d'Azur, reports Fabien Lemercier for Cineuropa. Also: Christian Carion (Joyeux Noël and Farewell) "is now writing the script for his fourth feature film En mai, fais ce qu'il te plaît (lit. 'In May, do what you want to do') about the events of May 1940."

"Jonah Hill had so much fun working with fellow Oscar nominee and Moneyball producer Brad Pitt that they're back in business on another fact-based film," reports Deadline's Mike Fleming. "Hill and James Franco are attached to star in True Story, the Rupert Goold-directed adaptation of a memoir by journalist Michael Finkel."

DVD/Blu-ray. In Vanya on 42nd Street (1994), out from Criterion, Louis Malle "achieved a "translation from experimental theater to experimental cinema," writes Joseph Jon Lanthier for Slant. "André Gregory and his troupe portray themselves, of course, as does New York in the My Dinner with André-esque opening scene that depicts the actors' jaunt to their sanctuary. Once inside the venue, however, Malle's cadence achieves that of a visceral dream."

On a related note, the New York Times' Dave Itzkoff reports that Gregory and Wallace Shawn are teaming up again, this time on a version of Ibsen's Master Builder. Shawn's writing the adaptation and Jonathan Demme will direct.﻿

[Update: More on Vanya from Steven Vineberg for Criterion.]

The Playlist's Kevin Jagernauth on James Chressanthis's doc on cinematographers László Kovács and Vilmos Zsigmond, No Subtitles Necessary: László & Vilmos: "This is the kind of Hollywood story we don't hear often enough, one of true friendship and collaboration, of two like-minded souls whose dedication to each other and respect for the craft made them true legends in the field."

Obit. "Theodore Mann, a producer and director who, as a founder of the influential Circle in the Square, was a driving force in the rise of Off Broadway theater in the 1950s, died on Friday in Manhattan," reports David Rooney for the New York Times. He was 87. "Both through the theater and the Circle in the Square Theater School, which was founded in 1961, Mr Mann had a hand in discovering or nurturing many stage actors who would go on to celebrated careers. Some, like Colleen Dewhurst, Jason Robards and Geraldine Page, had major professional breakthroughs with the company. Other actors linked with the theater over the years have included George C Scott, Al Pacino, Dustin Hoffman, Jane Alexander, Laura Linney, Kevin Kline and Raul Julia. Kevin Bacon and Philip Seymour Hoffman are among the school's alumni."﻿