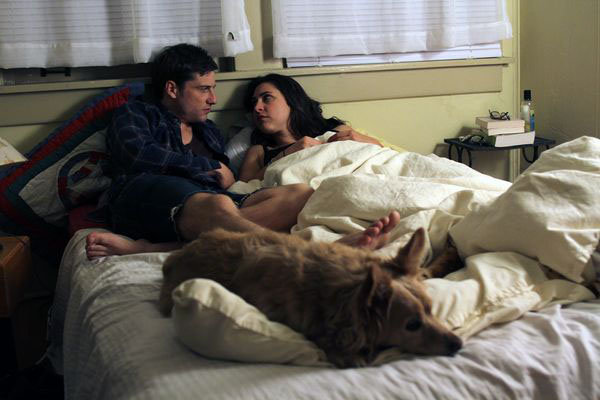 Just spotted Scott Macaulay's item at Filmmaker noting that not only has Joe Swanberg completed yet another film he's also put it up on Vimeo, where anyone anywhere can watch it for free throughout January. Marriage Material (55'30") features himself, Kentucker Audley, Adam Wingard, Caroline White, Kris Swanberg, Jude Swanberg and Amanda Crawford and focuses on a young Memphis couple who "agree to babysit their friend's 6-month-old for a day. The experience causes them to examine their own relationship and their feelings about marriage and children."

For the Los Angeles Times, Mark Olsen's asked Joe why he's doing this and Joe's got five good answers. The first one: "The date of the 'release' is connected to the shipment of the first DVD in the Joe Swanberg: Collected Films 2011 set that Factory 25 is doing, but it's not lost on me that Sundance is also starting this week. The Sundance Film Festival makes the whole country aware of independent film for a week or so, but most people can't be there, so it's fun to put something up that everyone can see."

[Update, 1/17: Joe Swanberg "has the intuition of a journalist or diarist regarding the narrative richness of his life and the lives of the people around him, and he comes up with distinctive, ever-evolving ways of capturing the details, the inner experience, and the social context of these stories," writes the New Yorker's Richard Brody. "There are films in which the filmmakers don't seem to know what the characters do in the gaps between scenes, but here, because Swanberg has a full sense of the unseen action, he's able to tell a good, long story quickly, deftly, and simply; he seems to have a novella in mind, and he deploys, with curiosity and confidence, the cinema's power to show — to bring character and context, detail and world together in a frame and in a continuous moment — as a way of achieving what the writer achieves with description."﻿]

The LAT's holiday weekend "Year in Movies" package, looking ahead to the popular highlights of 2012, features trailers, profiles, photos and so on.

The Golden Globe winners; and the Lists and Awards 2011 Index has been updated overall.

Reading. Dennis Cozzalio and Bill Ryan have been discussing Joel and Ethan Coen's The Man Who Wasn't There (2001) at considerable length, and tomorrow Dennis will open the "SLIFR Tree House" to five of his favorite online writers. They'll be discussing the year that was, 2011.

For Design Observer, Pat Kirkham "reassesses the evidence, scholarship, and debates about the contributions made by [Saul] Bass to three films directed by Alfred Hitchcock."

The Telegraph's run an edited version of Tilda Swinton's introduction to a new edition of Virginia Woolf's Orlando.

This year's Edge.org question: "What is your favorite deep, elegant or beautiful explanation?"﻿

﻿For news and tips throughout the day every day, follow @thedailyMUBI on Twitter and/or the RSS feed.﻿﻿﻿﻿﻿﻿﻿﻿﻿﻿﻿﻿