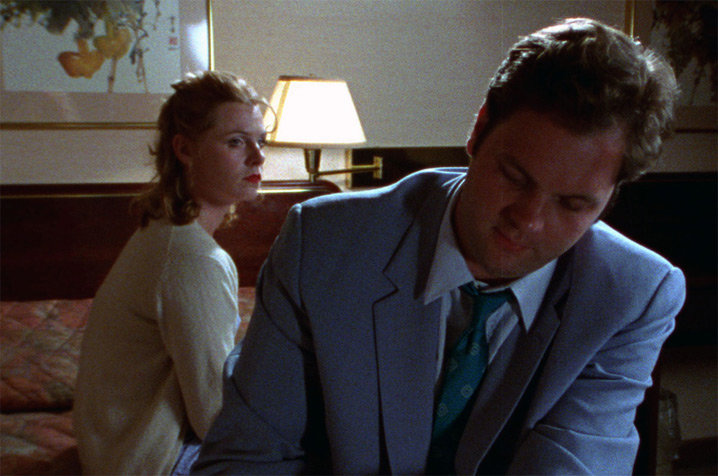 Back in 1998, at the IFP Film Market, Thomas Ethan Harris, then the director of the Los Angeles Independent Film Festival, strongly recommended an unknown film called Aberdeen.  I followed his advice and was startled.  Where most of the market films were by-the-book attempts to replicate commercial formulas, Aberdeen was a distinctive comic vision that followed none of the rules and managed to weave together wild abstraction and documentary observation as if it were the most natural thing in the world.

I assumed I'd hear about Aberdeen soon, but I never did.  I don't know what adventures the film had after the IFP market, but it never received a public screening, and no one but me (and the vigilant Mr. Harris, whom I never saw again) seemed to know anything about it.  Good films often fall through the cracks, but this was an extreme case.

Somewhere over the years, the filmmakers, Kathy Fehl & Ian Teal, spotted Aberdeen on my online best-of-1998 list, and let me know that they were gradually preparing it for release.  Twelve mysterious years after that IFP market screening, the renamed Mint Julep appeared on the 2010 festival circuit, still not getting anywhere near the attention I think it deserves.  Its New York premiere is on June 8, 9 and 10 at Theatre 80 St. Marks, at 7:30 pm each night.

Among its other virtues, Mint Julep strongly evokes the rhythms and behavior of life in a small Southern town, even though the city of Aberdeen is comically underpopulated.  There's a plot - the irresponsible wife (Angelica Torn) of a neglectful husband (Teal) runs away to the big city - and a subplot - a merry widow (Susan Aston) seduces the husband to expedite her life insurance payment - but neither thread organizes our attention too forcefully.  Drama rears its head once or twice, only to die a shaggy dog's death.  At any given point, Fehl & Teal are likely to hand the film over to a supporting character with no particular role in the story: some of the most memorable scenes belong to non-actors who seem at home in their own beauty salon or behind a bar, and have something of the zest of the urchins or old men in Italian neorealist films.

The only filmmaker whose style reminds me at all of Fehl & Teal's is Alan Rudolph.  As in Rudolph's films, outlandish humor and potentially unsympathetic comic characterization are orchestrated with copious soundtrack music (here, from jazz pianist Tommy James) and shuffled in with offbeat realist elements to suggest a focus on a larger community. Nearly every scene in Mint Julep is a deadpan comic set piece, sometimes organized around a formal idea (a murder shown in extreme long shot, with the foreground dominated by lawn sprinklers and a lurking groundsman [David Morse]; or, the wife's drunken suitor [Johnny Mez] briefly interrupting his romantic anguish to walk to a pool table and sink the cue ball), sometimes around absurdist repetition (the wife's increasingly abusive nighttime conversations with her soundly sleeping husband), sometimes around unexpected characterization (the ambivalent wife hugging her cat as her husband tussles with her would-be suitor; or, while seemingly prostituting herself in the big city, chasing off a john by waving her wedding ring).  The set pieces usually provide plot data, but one waits in vain for narrative momentum to gather.  A confession of murder (during cunnilingus) has no consequences at all; the mad groundsman's only narrative function is to turn detective, then eat his evidence.

In its end game, the film creates an emotional cadence: husband and wife may be unable to break their destructive patterns, but they have a genuine love that overcomes their differences, if only for the moment.  Fehl & Teal do not linger on the emotion, and have the formal smarts to follow it with a highly abstract, plotless interlude of unrelated major characters passing each other unawares on the streets of Aberdeen, with a pretty new girl introduced just to crack open the film's hermetic universe.  The final minutes are dominated not by the reunited couple, but by small-town signage and an underage, smoking golf caddie.  In Mint Julep, love and murder take a modest place among the other repetitive activities of lives only occasionally examined.