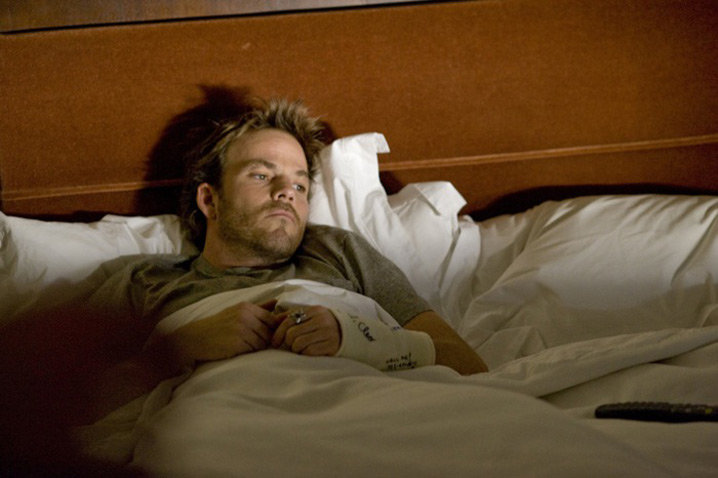 Hey, kids! Want critics to compare your movie to one by that old dead Italian guy Mike Antonioni? Well, it's easy. Just include a shot in which your lead character smokes a cigarette down to its filter, preferably by him or her self, and preferably without saying a word to anybody else, and the Antonioni comparisons will beat a path to your door!

Facetiousness aside for the moment, the Antonioni comparisons that have met Sofia Coppola's new feature Somewhere indicate that more than a few people out there still don't, if you'll forgive the term, "get" Antonioni. Yes, the man's films contained many shots of lonely, existentially anxious people, many of them male, smoking cigarettes, but I can't think of a one that contains a single lengthy take of a lone male just sitting and finishing and stubbing out a cancer stick, as Somewhere does. There's at least one Bela Tarr picture out there that I believe contains such a shot. But that's a Bela Tarr picture, is the point. Anyway, I've also seen Somewhere compared to an Antonioni film on account of "nothing" "happens" in it. While Somewhere is indeed not exactly fraught with incident, or plot for that matter, again we encounter some misapprehension of Antonioni. Okay, L'eclisse and Red Desert aren't exactly Inception, but Blow-upand The Passenger? I defy you to provide single-sentence summaries of those numbers.

The more salient point is that for whatever influences Coppola has absorbed (and she seems to continue to look, and learn; there's a bit here with twin pole dancers that looked and felt to me as if it could have come out of her own brother Roman's comic-surreal CQ, which is more of a [very knowing and self-aware] pastiche piece than anything Sofia's ever done), her cinematic mode has always been rather assuredly her own, and one of the pleasures of Somewhere is how supple her camera stylo, such as it is, writes. The cinematographer is Harris Savides, following up Noah Baumbach's Greenberg, which, like this film, is "about" certain more or less privileged lives in Los Angeles and/or Hollywood. Both are handsome films whose looks are defined not only by Savides' skill but by directorial signatures. It seems that for Greenberg Savides was asked to capture every floating dust mote refracted through the sun of the California near-desert; in Somewhere, the interiors of the Chateau Marmont, wherein aimless, debauched actor Johnny Marco (Stephen Dorff) holes up, avoiding both work and emotional connection, seem, atmosphere-wise at least, as antiseptic as factory clean rooms. Within these closed-off spaces, Coppola shifts between stationary and unobtrusively hand-held cameras with maximum ease and minimal self-consciousness; if the camera is by definition a voyeur, in Coppola's hands its a very discreet and well-mannered one. Its equanimity makes one's response to the film's ostensible climax a more complex one that it might have been otherwise. After a series of privileged moments with his pre-adolescent daughter (a very good and unaffected Elle Fanning), the product of a ruined relationship, and less meaningful encounters with ex-lovers, quasi-groupies, and other manner of human flotsam and jetsam that attends the existence of a perhaps fading Hollywood golden boy, Marco has an emotional breakdown. Over the phone, of course. "I'm not even a person," he sputters. One does feel rather bad for him, but one's heart doesn't exactly go out to him; one reason he's not a person is that he doesn't have any people, so to speak, around him. His daughter Cleo is an inchoate person, and as much as he admires her—that is the proper term for his regard for her, really—she is still an inchoate person. And it's not that Johnny has cut himself off from a fully-formed human beings. It's more that maybe he could not actually find them if he tried. This makes Somewhere into a horror film of sorts. In a more conventional picture Johnny's epiphany would see him dutifully reporting to rehab. But rehab suggests that recovery is possible. The film's elliptical ending suggests that Johnny's actual condition may be incurable.

If Coppola's films' do have something in common with Antonioni's, it's in the depiction of the brittleness of adult emotional life in a time and milieu in which, as the director put it over 50 years ago, "Eros is sick." For all that, and for all the above, Coppola seems a somewhat more optimistic filmmaker. In her unobtrusive way she's always seeking out the tendresse beneath Johnny's cool surface. And she has no trouble finding that quality in Cleo. In Red Desert, the child ails almost as much as his mother, or maybe he puts on his condition; in the film's scheme of things it doesn't make much of a difference. In Somewherethe child not only has health but seeks it, keeps going in its direction; and the adult cannot follow. There's a part of me that resists a wholehearted embrace of this picture because of what I see as its essentially anecdotal nature; but the more I think about it, the more I come around to it. It's what you might call a grower.

Also, in case you were wondering if the Marmont really was all that in terms of bad-boy facilitating, I can vouch. I remember the first time I stayed there, back in 1998, checking in at something like two in the morning (my flight got in late), and in a couch in the corner of a foyer that I idly wandered into while getting registered, there was a Hollywood "It" boy of no small fame and underground at-least-bi reputation receiving fellatio from a pretty much unimpeachably female blonde. "Whoa!' I almost exclaimed as I staggered back to the lobby desk. Coppola's film almost effortlessly captures the unstuck-in-time appeal of the place; the seeming old-world gentility of the decor is a fascinating juxtaposition with the anything goes ethos it seems to embody. As if it is not a real place at all.