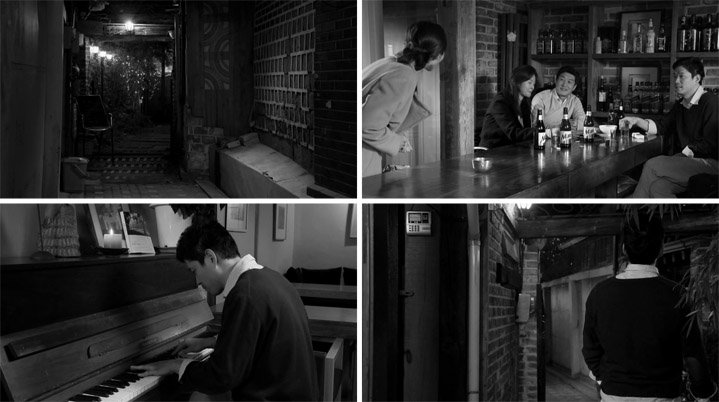 Hong Sang-soo's style—﻿visual and narrative repetition, long takes, zooms substituted for cuts, and cuts that are more like ellipses than commas or semicolons—﻿﻿lends his movies a wonky sense of space and time.

Take, for example, Hong's new film, The Day He Arrives (2011)—a modest, graceful movie about a film director (Yu Jun-sang﻿) coming back to Seoul after some time away. There's some debate as to whether the film takes place over several consecutive days or whether it represents variations on the same day; the most accurate answer is probably "both," with some strands of the plot proceeding chronologically, and others seemingly stuck in a time-loop. The director's repeat encounters with a friendly actress and a group of film students, for instance, clearly happen over several days; in contrast, his evening trips to Novel—﻿a small bar where he and his friends seem to be the only customers—﻿﻿are fuzzier in terms of chronology.

Hong uses just four angles for almost all of the Novel scenes: two exteriors and two interiors. Though the two exterior camera positions are never used in combination with one another, they represent reverse angles: one looks at the entrance to Novel from a narrow pathway, and is used for shots of characters arriving or leaving; the other points toward the pathway from the entrance, and is used for the moment during every one of the Novel scenes when Yu steps out for a cigarette. The interior shots don't line up quite the same way: one has the camera facing a corner of the bar close to the entrance, while the other has it pointed at an upright piano which Yu's character plays when he gets drunk.

This minimalist decoupage—combined with the fact that the Novel scenes always start the same way, and that Yu always plays the same piece of music on the piano—gives the bar sequences a sort of familiarity-through-repetition. Watching the movie, you get to know that one particular corner, with its exposed brick and half-empty bottles of Johnnie Walker, very well—﻿yet, because there's no overlap between the two interior angles, the actual space of bar remains vague. Novel exists as a corner and a piano—but where the piano might be in relation to the corner is anybody's guess.﻿﻿  ﻿

Though they play around with viewer disorientation—﻿﻿﻿﻿﻿﻿﻿the underplayed "big reveal" partway through A Tale of Cinema (2005) being a good example—﻿﻿﻿﻿﻿﻿﻿﻿Hong's movies aren't brainteasers. Whenever Hong throws in puzzle-movie techniques—﻿﻿﻿﻿﻿﻿﻿﻿﻿casting one actress to play multiple characters (as he does in The Day He Arrives and the upcoming In Another Country), presenting a story non-chronologically or through multiple perspectives﻿ (as in The Power of Kangwon Province [1998], The Virgin Stripped Bare By Her Bachelors [2000] and Oki's Movie [2010]; the last of these, like Day, opened in New York last week), having a film-within-a-film (as in Oki's Movie and A Tale of Cinema)—it serves to clarify, not jumble, plot and theme. ﻿﻿﻿﻿﻿﻿﻿﻿﻿﻿

Hong's idiosyncrasies have an efficient logic to them: in The Day He Arrives, Yu﻿ becomes fascinated with Novel's owner because she reminds him of his ex-girlfriend, so it makes perfect sense that both the owner and ex should be played by the same woman—﻿﻿﻿﻿﻿﻿﻿﻿﻿﻿and since the only things that matter about Novel is that it has a corner for the characters to sit in and a piano for Yu to play, it's totally sensible on Hong's part to leave the rest of the space blank. 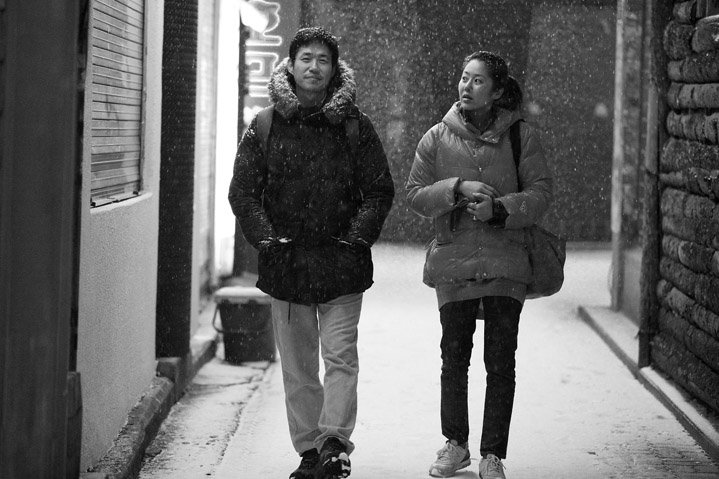 ﻿Ironic, then, that these space-and-chronology-footloose movies are completely fixated on places and pasts. Returns and run-ins are Hong's favorite dramatic tools, and his movies are constantly repeating themselves (either by showing the same event from different perspectives or through visual rhymes) and each other (made a year apart, both Oki's Movie and The Day He Arrives are set in Seoul during winter, feature a filmmaker as one of their main characters, contain a scene where the filmmaker character has his picture taken by stranger, and run almost exactly 80 minutes—﻿﻿not to mention the fact that the plots and situations of both films echo Hong's prior features).

Just to complicate things further, there's the matter of Hong's sound mixes, which can get a tad eccentric, sometimes eschewing audience cues—﻿﻿﻿bass and slight reverb for voice-overs, tinny flatness for phone conversations—﻿﻿﻿﻿in favor of putting everything at the same clear, immediate level. During the Novel scenes—﻿which really are a microcosm of Hong's style—﻿﻿Yu receives text messages from his ex-girlfriend, which are represented by voice-overs; these voice-overs are recorded and mixed in a way that makes it sound as though the speaker is present in the same space—﻿﻿﻿an effect that recalls a similar one in Like You Know It All (2009), where a cellphone conversation is presented with both voices at the same level, even though only one of the actors is shown on-screen.﻿

All of this adds up to a lot of disorienting and dislocating effects—﻿yet Hong's films rarely feel confusing or even all that arty. Part of this is due to the fact that his movies, while hardly plotless, tend to have fairly simple stories at their centers (a return, a love triangle, a break-up, an attempt to relive the past); sly and assured, Hong excels at portraying simple things (or variations of the same simple thing) in ways that are complex without seeming overtly complicated.

But an even bigger factor is Hong's immediate, economical shooting style. Long takes have been a staple of Hong's work since his debut feature, The Day a Pig Fell Into the Well﻿ (1996); A Tale of Cinema (2005) introduced occasional forceful zooms, which preserve some of the basic visual grammar of editing—﻿﻿﻿﻿﻿﻿switching from wide shot to medium to close-up at pertinent moments—﻿﻿﻿﻿﻿﻿﻿while also maintaining a fluid momentum. Camera movement is largely restricted to pans, and while Hong's choice of angles often leaves a lot outside the frame, the shot compositions themselves are straightforward, unabstract.

Writing on The Day He Arrives from Cannes last year, Daniel Kasman compared the movie's spatial and temporal loops to a "jump in logic from a dream﻿," pointing out that, while the film seems to follow Yu's character everywhere he goes, the one thing it never explains is when and where he sleeps—﻿teasing, perhaps, that he's never awake to begin with (which, of course, reminds me of that catchy cornball line in Inception, the one where Leonardo DiCaprio says that it's "only when we wake up that we realize something was actually strange﻿").

"Playing by dream rules"—﻿﻿﻿﻿﻿﻿﻿﻿that's about as close to a definition of Hong's plotting as you can get. People and places nonchalantly transform, space warps, shifts and skips in time are unacknowledged, situations repeat themselves from scene to scene and film to film like recurring dream images—﻿﻿﻿﻿﻿﻿﻿﻿﻿and then there are the characters themselves, who are always coming back to places from their past and to mistakes they've made. It's all dream stuff—﻿﻿﻿﻿﻿﻿﻿﻿﻿﻿and yet nothing seems out of the ordinary. This careful balancing act, where the dislocating effects complement the naturalism instead of cancelling it out—﻿﻿﻿﻿﻿﻿﻿﻿﻿﻿﻿that's the essence of Hong's style.