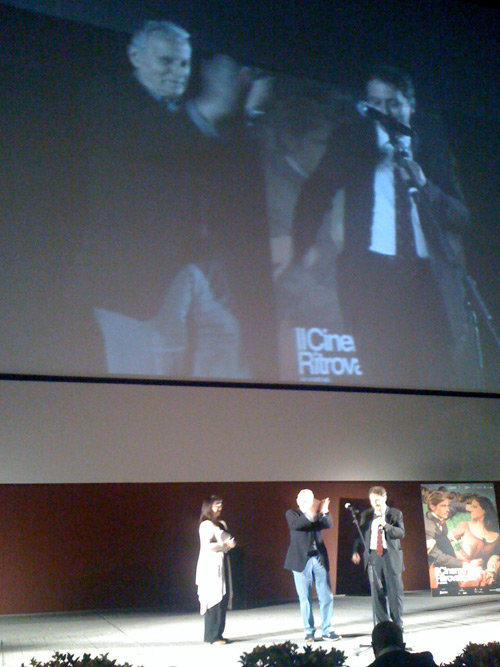 JUNE 26. Bologna is nice and quiet this year after Italy's World Cup defeat. It's a pointed contrast to the 2006 edition of Il Cinema Ritrovato, when the national team came home the victors from Olympiastadion in Berlin. Fireworks blazed, drivers honked incessantly and fans raged through the streets. Morale was up for football lovers, and distractions were abound for the thousand or so guests of the world's foremost festival of old films. The customary outdoor screening in the Piazza Maggiore was even replaced, much to the befuddlement of cinema population, with a projection of Italy's semi-final battle against the German team.

Not the case this year. John Ford will have to occupy the place of Cannavaro. Giorgio Ferroni will naturally have to stand in for Gilardino. And Di Natale takes a seat while Fei Mu shines brightly on the big screen. 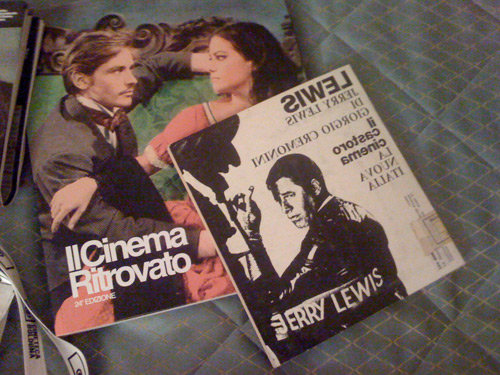 Above: Found in the Cineteca di Bologna's "Mostra mercato dell'editoria cinematografica" (a small fair of film-related books, DVD's, posters and other goods): a book by Giorgio Cremonini on Jerry Lewis. This series from "La Nuova Italia" customarily includes an interview with the director in question. In this small tome, Cremonini includes an "imaginary interview" (!) using remarks by Lewis from several sources.

What is Il Cinema Ritrovato exactly? The answer may not seem readily apparent on a quick glance. First, it's a curated, week-long event in Bologna, Italy, featuring old films and taking place largely in Bologna's cinematheque (the Cineteca). Sometimes the films have been recently restored and are being presented in the newly minted versions (sort of the equivalent of a 'Gala' screening here, only preservationists are the stars, showing off their latest tricks and recounting hurdles overcome in the long, painstaking process that is film restoration). Sometimes it's just that a new copy of a film that has been unavailable for a long time is included as part of a retrospective (there are several at Il Cinema Ritrovato). And sometimes the film that is shown has not been restored, and there is no good print available, but it is projected anyway, not only to satisfy completists, but also, more importantly, to stir discussion in the hopes that a new copy or restoration does become available.

What else does the festival do? Well, Il Cinema Ritrovato directors Peter von Bagh and Gian Luca Farinelli are not only responsible for curating their own programs,  but they also curate curators. Their job, by and large, is keeping an ear to the ground in the archival community and attempting to be as comprehensible as possible of emerging trends, projects and controversies (like all intelligent festival directors, Bagh and Farinelli don't shy away from difficult conversations). As film archeology is a quickly growing and changing area of interest, old histories must be constantly re-examined. Like so many market festivals, films are "tested" here, but in a different way: the discerning eyes of the archival world line-up to judge the merits of a restoration or program (questions that are oft-asked would include: is the color true to the original? what new digital techniques are being employed? was the archive wise to choose this film over another that is in greater need of renewal? does this grouping of films reflect an urgent need to study a period of production? a director? a genre?). 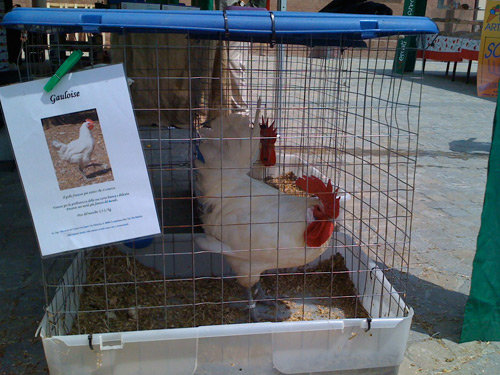 Above: A chicken for sale in the farmer's market outside the Cineteca.

At yesterday's presentation to this year's major focus on John Ford's films from 1917 to 1933, Joseph McBride (Searching for John Ford) reminded the audience of a quote from Andrew Sarris in the 1960s. Sarris's opinion was that if John Ford had passed away in 1929, he wouldn't have been more than a footnote in film history. McBride responded by saying, "Well, we're here to challenge that." Since McBride and other writers such as Michael Wilmington and Peter Bogdanovich started writing seriously about Ford five decades ago, some thirteen films from the director's silent period have been rediscovered, usually at foreign archives or in private collections since American studios were in the habit of destroying their prints (or were generally negligent with their collections, intentionally or not). That's about 40% of the pre-talkie filmography. And as if the evidence wasn't already perfectly clear that Ford's early career deserves a  thorough critical overhaul, a touching memento came through earlier this year in the form of a complete nitrate original of the director's thought-to-be-lost Upstream (1927), discovered in New Zealand (along with a trailer for another lost Ford, Strong Boy [1929]). (It was too soon for the prints to appear in Bologna, though they will most likely be at next year's fest.)

The only existing fragment for Ford's second feature, The Secret Man (1917), was shown yesterday. One doesn't need much more than the ten surviving minutes to support the notion that this was an exciting and sophisticated entertainment on par with his first feature, Straight Shooting (1917). As McBride pointed out, we already see in many of these early examples the same themes that would dominate the later work, concepts such as wilderness versus civilization, the noble bad man, etc. Secret Man shows Harry Carey, "a deglamorized actor," as McBride has astutely pointed out, at the center of a rousing action which includes  a little girl injured in a stagecoach accident. Carey's sensitive outlaw "Cheyenne Harry" fires his pistol into the air to call the law's attention, and melancholically says that he would have gotten away, only the girl was dying of thirst. It's a nice moment, one that would have easily suited John Wayne. Indeed, the way Carey swirls his coffee, or pats the sweat beads off his brow, or lifts the hurt girl into his arms (recalling The Searchers) is not only a catalogue of gestures for Wayne, but for so many western actors who would follow.

Straight Shooting was greeted with rousing applause from yesterday's audience—due justice for a film which has been accruing masterpiece status since it's discovery in a Czech archive in 1966. A sly Cheyenne Harry emerging from a hollowed tree to mock a wanted notice seeking his arrest would make a suitable poster image for the elusive status of Ford's work, which we will continue to look at this week.

Daily Questionnaire (in which yours truly asks a series of questions to intrepid festival guests).  Today's special: The Ferroni Brigade (Barbara Wurm, writer and curator, Olaf Möller, also a writer and curator, and Christoph Hüber, film critic for Die Presse in Vienna):

How many times have you attended Il Cinema Ritrovato?

How many programs do you plan on seeing?

BW: As may as possible!

OM: Six per day is not enough!

Can you think of a major discovery that you have made at the festival in the past?

In your opinion, who is a figure in film history deserving a closer look?

What program or film are you looking forward to the most? 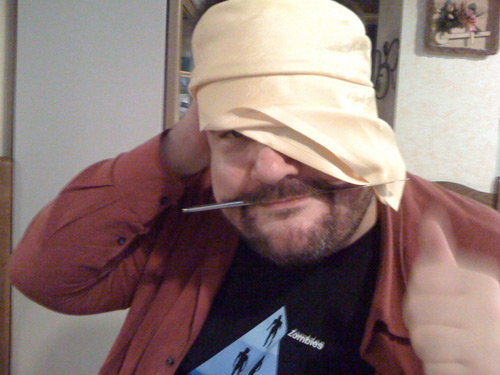 Above: Olaf Möller, the other first secretary of the central committee of the Ferroni Brigade, donning pirate gear in a Bolognese pizzeria.