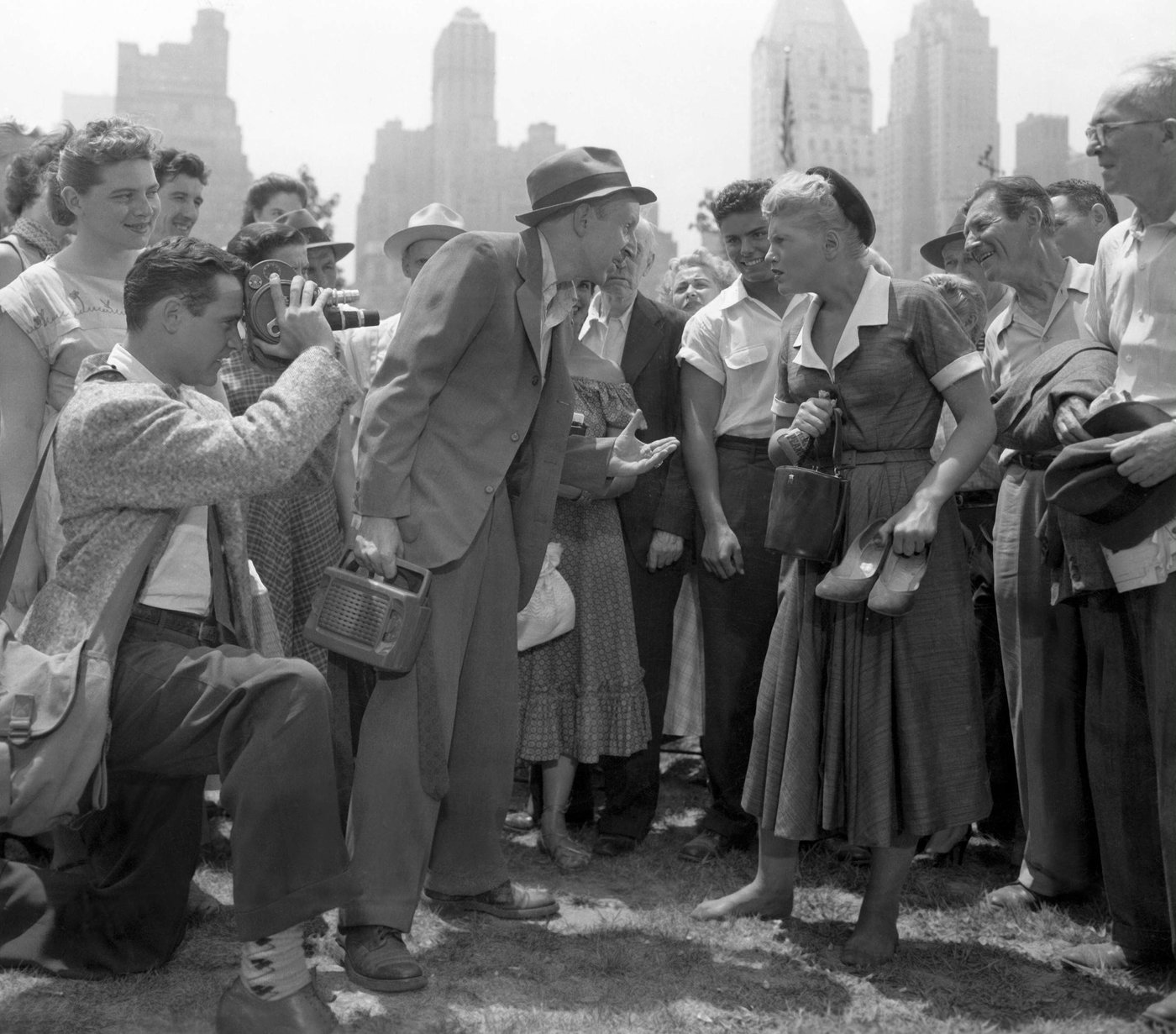 “A kind of banalization of celebrity has occurred: we are now offered an instant, ready-to-mix fame as nutritious as packet soup. In the post-Warhol era a single gesture such as uncrossing one's legs has more significance than all the pages in War and Peace.”

The darker side of fame and the sinister aftertaste of success are recurring features in many of Cukor’s films, from What Price Hollywood? (1932) to Rich and Famous (1981); the American director often hinted at the anguishing emptiness lurking behind stardom. In It Should Happen to You (1954) Cukor pushes even further with his reflections on the elusive matter of celebrity and the role that mono-dimensional images play in projecting the illusion of limelight. Gladys Glover (Judy Holliday), an aspiring bigwig of nondescript qualities, meets Pete Sheppard (Jack Lemmon) in Central Park, where he is busy capturing “real things and real people” with his hand-held 16mm camera in what may as well be an early incarnation of ‘Direct Cinema’. Gladys, Pete learns, is in New York to ‘make a name for herself’ and despite having been in town for over two years, she still hasn’t managed to do so. The budding documentarian asks Gladys if she would like to see his piece of cinema verité once it's finished. “I’d give my right arm to see myself in the movies” enthuses Galdys, “just give me your right address” minimizes Pete. Perhaps galvanized by his encouraging words – “where there’s a will, there’s a way,” Pete reassures her – Gladys proceeds to make a name for herself—and quite literally so. Inspired by the lyrical potential of a blank billboard, she buys the ad space from a Madison Avenue executive and has her name printed and made visible on the urban canvas. With her name overlooking Columbus Circle, the aspiring starlet exudes happiness from every pore: she is finally famous, though for no particular reason.

Mere visibility grants Ms. Glover success in the biz of showing. After having her name duplicated on multiple billboards – thanks to her brokerage with advertising executives from Adams Soap eager to regain the Columbus Circle spot they had booked – she gets invited to be on talk shows, her image now adorning myriad advertising campaigns. Meanwhile Pete Sheppard, romantically sticking to his idea of realism, has moved next door, platonically befriended Gladys and tried to persuade her not to succumb to the degrading blackmail of fame, but to no avail. Gladys Glover becomes, and quite ironically so, “The Average American Girl” for Adams Soap’s advertising campaign, lending her vapid charisma to the monotonous variations of consumer narratives. As Gladys stretches her neck out in ecstasy and brings her open hand close to her head as if ready to keep from fainting, Pete dispiritedly holds his forehead with both hands. Alienated by their seemingly irreconcilable ethic and aesthetic concerns, Gladys and Pete are pulled apart as Adams III unsuccessfully courts the up and coming celebrity. His gentlemanly strategy though fails to impress Gladys who, despite the notoriety she came to enjoy, still verges more on the naïve than the calculative. Shocked by the opportunistic sentimentalism of her wealthy pursuer, she returns to her flat to find a projector in her living room with a note inviting her to play the film. On that film, Pete, despite his professed love for “real things and real people”, recorded his love confession to Gladys instead of sharing it with her in person. So much for his passion for the real thing…

Finally taken by Pete’s anti-celebrity lobbying, Gladys surrenders to his loving insistence and embraces his credo, though an empty billboard on the way to their honeymoon lures her back to the dream of stardom for a fleeting moment before a hurried happy ending puts an ambiguous end to her hesitation.

Differing from analogous Hollywood products that warned of the collateral dangers of fame, It Should Happen to You steers clear from predictable educational lessons to delve deep into the paradoxical nature of success. Here Cukor presciently sketches a very modern form of celebrity obsession, one that does not depend on talent but represents, on the contrary, a means and an end in itself. Gladys’s fame rests on the sole power of appearances; just by virtue of being visible in the branded cityscape she becomes “someone.” While extremely familiar in today’s media landscape, Judy Holliday’s character was a pretty unusual one for the 50s, even for the front page of a tabloid. Her peculiar brand of celebrity has in fact gained traction with reality TV where random, talentless contestants can turn into superstars overnight just by merely appearing on television—pretty much the same way Gladys gets famous by simply having her name made visible to the crowd. Jack Lemmon’s character too, while ostensibly abhorring the superficial aspirations of Gladys, is attracted by her and is ultimately unable to live up to his idea(l)s of realism relegating instead his love declaration to the safe distance of recorded images. Their final reconciliation may even be read as a sardonic commentary on the eventual convergence of “realism” and “consumer fiction” that awaits the couple as well as movies. Cukor’s 1954 film is a proto-Warholian tale of instant fame and packaged glory predating the future — now cogently current — developments of celebrity culture that have invaded our imagination, doing away with any need for skills, creativity or talent.

It Should Happen to You screened as part of a complete retrospective of George Cukor at the 66th Locarno Film Festival.