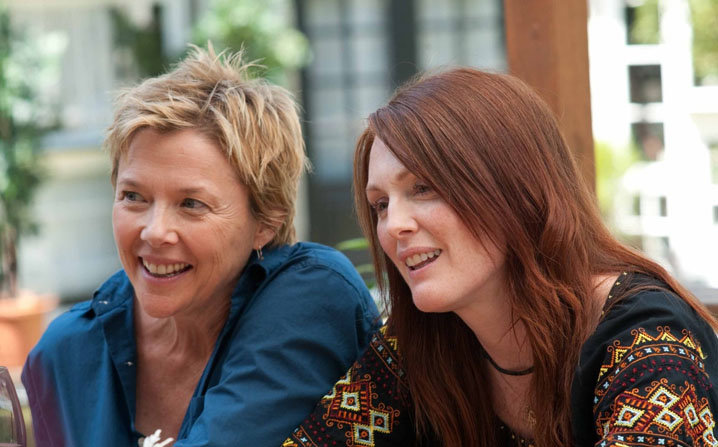 "The 2010 Los Angeles Film Festival (LAFF), which opens tonight with the LA premiere of Lisa Cholodenko's KCRW-crowd-pleasing gay-marriage rom-dramedy The Kids Are All Right, will uphold a few traditions from previous years," begins the LA Weekly's Karina Longworth. Those traditions include the filmmakers' retreat, the mix of Hollywood studio fare and "micro-indies" and cash rewards ($50K) for the winners of each competition. "Pretty much everything else will be totally different." Former Newsweek film critic David Ansen is the new creative director, for example, and the festival's moved downtown. "In tandem, these changes could fundamentally affect the festival's demographics, personality and future viability."

As for the films, the "competitions contain at least three total knockouts, films that boldly announce new talents either behind the camera or in front of it: Ditteke Mensink's experimental-but-accessible documentary Farewell; Brett Haley's The New Year, a moving drama about a beautiful brainiac in a rut, starring Trieste Kelly Dunn, who Ansen predicts is 'the next indie Parker Posey'; and Laurel Nakadate's The Wolf Knife, a wild, bored-teen spin on Thelma and Louise. A few lesser features take enough chances and show enough promise to be more than worthy of their place in LAFF's high-stakes competitions: Camera, Camera, a documentary about tourist photographers in Laos, a country that doesn't have a free press; Dog Sweat, a narrative made surreptitiously on the streets of Iran; and Upstate, a relationship drama shot on 16 mm, which unexpectedly evolves first into an identity thriller, then into a kind of stoner comedy."

LA Weekly critics present a further annotated list of "30 films to put on your to-do list" and David Ehrenstein argues that "much of the essential action springs from the 'old,' thanks to numerous retrospective screenings of films both classic and obscure."

In the Los Angeles Times, Steven Zeitchik profiles Ansen and Reed Johnson meets Rebecca Yeldham, "the festival's ever-diplomatic, Australian-born director." Elvis Mitchell's interview with both on The Treatment makes for an engaging half-hour, even for those who don't live in LA, have no plans to attend LAFF this year but do have an interest in how festivals might address the needs of their particular communities.

Todd McCarthy: "I'll be curious to check out as many films as I can, if only for the personal reason that, through the years, I grew to realize that Ansen's taste coincided with my own more consistently than that of any other critic. We'll see if that translates into a first-rate film festival."

Kim Adelman talks with the directors of three docs seeing their world premieres at the fest: Malcolm Murray, whose Camera, Camera, whose "focuses its lens on Western shutterbugs swarming Laos"; Chris Metzler and Lev Anderson's Everyday Sunshine: The Story of Fishbone "gets up close and personal with the legendary Los Angeles ska-punk-funk band"; and Lisa Leeman's One Lucky Elephant "explores one man's attempt to break up with a 10,125 pound female who never forgets."

Updates, 6/19: "Thunder Soul, directed by Mark Landsman, tells the story of the student band from Kashmere High School," writes Mark Olsen. "Under the leadership of [Conrad O] Johnson, known to his students as 'Prof,' the band brought a powerful rhythm and soulful freshness to jazz band competitions more often marked by a certain staidness." The June 27 screening will be followed by a live performance.

Also in the LAT: "[T]his is an event that covets the Comic-Con crowd as well," writes Geoff Boucher in his "fanboy guide" to the LAFF.

Update, 6/20: The name Leopoldo Torre Nilsson "would draw blank stares from most Americans, even committed cinephiles," writes Reed Johnson in his piece on the four-film retrospective for the LAT. But back in the 60s, "to Ansen's youthful eyes, the South American director's psychologically rich, menacingly expressionistic movies were as striking as those of the French New Wavers and Italian Neorealists, then the celluloid heroes of the art-house set."

Stephen Saito, again at IFC.com, has background on The Tillman Story, Amir Bar-Lev's "doc about the lies and deception that befell the family of NFL star-turned-fallen soldier Pat Tillman after he was killed by friendly fire in Afghanistan."

At indieWIRE, Kim Adelman passes along "10 Tips for Marketing & DIY Distribution" picked up at the festival.

Updates, 6/22: Reed Johnson on Revolución, an omnibus film comprised of ten short films by ten different Mexican directors addressing "the legacy of the Mexican Revolution of 1910-1920... Tonally and in subject matter, the vignettes in Revolución run the gamut. Some have the rounded coherence of short stories. Others are more like dreams (or nightmares) than narratives, registering as impressionistic snapshots or tone poems. Some bristle with caustic humor and bitterness. Others ache with nostalgia, expressed in images of the country's rugged, sweeping landscapes and its stoic, resilient populace. Collectively, the films raise many unanswered and perhaps unanswerable questions about where Mexico has been and where its people, politics and culture are headed."

Also in the LAT, Susan King gets a few words with John Lithgow, a prelude to Over the Top: An Evening with John Lithgow, which is this very evening: "LAFF will be screening The Adventures of Buckaroo Banzai, WD Richter's wild and crazy 1984 sci-fi spoof in which Lithgow played Dr Emilio Lizardo, an Italian scientist whose body is possessed by a maniacal alien, as well as the episode 'Terror at 20,000 Feet' from the 1983 Twilight Zone: The Movie."

Updates, 6/24: "The Los Angeles Film Festival is a good place to find the hidden indie gem, but it can also bring out some boldfaced names," writes Mark Olsen. "On Monday, one of those names, Ben Affleck, took to the stage to talk about his career and his upcoming effort as director, actor and co-writer, the crime drama The Town."

Olsen also talks with Laurel Nakadate about one of the "buzziest" films at the festival, The Wolf Knife, about "the woozy uncertainty of the moments when adolescence gives way to adulthood."

Also in the LAT, Noelene Clark talks with producer and director of photography Robert Muratore about The People vs George Lucas and Amy Kaufman interviews a few of the subjects of Make Believe, "a documentary that follows six young magicians (including Lambert) from the US, South Africa and Japan as they prepare to compete for the title of Teen World Champion at the prestigious World Magic Seminar in Las Vegas."

Update, 6/25: "Any concerns about the freaky Last Exorcism skimping on the frights should be wiped away like the blood that makes its way onto the lens of a camera crew that accompanies the Rev. Cotton Marcus (Patrick Fabian) as he travels to (the fictional) Ivanwood, Louisiana to cure the 16-year-old Nell (Ashley Bell) of what appears to be demonic possession." Stephen Saito for IFC.com: "Not all of The Last Exorcism works — it could stand to be tightened up a little as the camera crew starts to get more involved as the film wears on, reminding the audience of what they're watching, and I wasn't entirely sold on the ending, which isn't as canny about playing upon genre expectations as a lot of the film is, but the film's too much fun to dismiss for those reasons alone."

Updates, 6/26: Todd McCarthy offers his takes on The Kids Are All Right, Chris Renaud and Pierre Coffin's Despicable Me ("antic, smart-mouthed, colorfully designed" but also "rather old hat") and The New Year: "The Florida setting and intimate concentration on a young woman's self-discovery put one in mind of Ruby in Paradise, but The New Year doesn't approach the contemplative serenity and moving undercurrents of Victor Nuñez's fine film. All the same, it will no doubt provide a useful calling card for [director Brett] Haley and [actress Trieste Kelly] Dunn,who have already made another feature together, A Night Out."