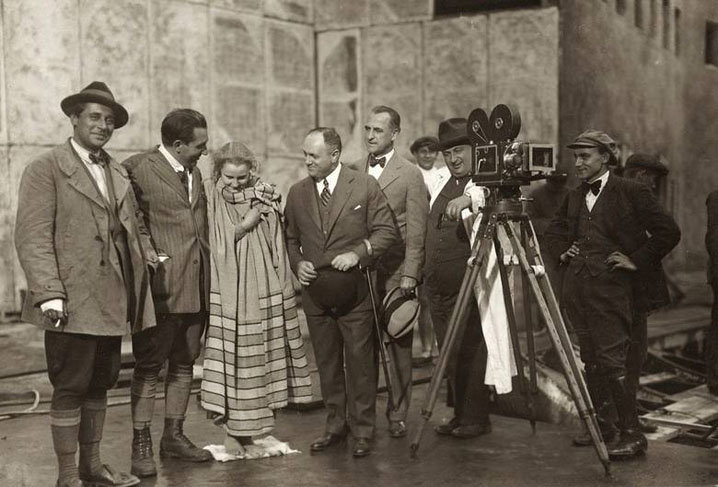 Horst von Harbou, still photographer on the set of Metropolis (1927) and brother of screenwriter Thea von Harbou, and so, brother-in-law to Fritz Lang, made that photograph up there in 1925 during a break between takes on a day that Lang was filming the flooding of the workers' city, one of the sequences in Metropolis that, for decades, we all thought we'd never see as Lang intended. But we're getting ahead of ourselves. First, from the left: Cinematographer Günther Rittau, Lang, Brigitte Helm, American theater-owner Samuel L Rothapfel, an unidentified fellow, cinematographer Karl Freund and his assistant, Robert Boberske.

The photograph is one of 17 currently on view at the Villa Grisebach in Berlin, where the entire set will be up for auction starting on Thursday. For what it's worth, the set of gelatin silver prints is expected to go for between 5000 and 7000 euros, that is, somewhere around $7000 to $9700. 17 also happens to be the age of Brigitte Helm when she was cast as the two Marias; the set was a gift to Helm from Lang and Thea von Harbou and is now being sold by her estate (she died in 1996). Definitely worth a browse.

"Over the years I've seen Fritz Lang's Metropolis countless times in various states of ruin and restoration, and for the most part found it hard to disagree with the conventional wisdom: beautiful images, trivial plot, naïve politics." Dave Kehr in the New York Times: "Lately, though, I've begun to like it more, in part because there is more to like." You're probably already well aware of the story behind the restoration, but very briefly: Following its premiere in 1927, Metropolis flopped and was cut down to what the distributors considered a more audience-friendly length. All that was cut out was considered lost forever until a 16mm print of the nearly complete original version was found in Buenos Aires in 2008. The missing scenes were incorporated into a 2001 restoration and The Complete Metropolis premiered at the Berlinale in February 2010, toured theaters around the world and is now coming out in the States on DVD and Blu-ray from Kino International.

Dave Kehr works us back to that photo: "With his engineering background and architect's eye, Lang favored orderly, symmetrical compositions; as the critic Frieda Grafe put it, he brought out 'the hidden geometry in every shot.' In Metropolis Rotwang's wild gestures, the robot Maria's erotic contortions and the destructive frenzy of the workers' revolt threaten to overwhelm Lang's clean lines and precise spaces. The last act of Metropolis seems to be fueled by this strange conflation of black magic, female sexuality and proletarian impetuousness, forces of irrationality that, once loosed, take the form of a torrential flood that threatens to drown the workers' city and with it the children that the irresponsible workers have left behind. Curiously, it's in this final movement that most of the small trims seem to have been made: a shot here, a brief sequence there, but all adding up to a diminution of what, in Lang's original version, was a slam-bang action finale — exactly the sort of thing you would expect the Paramount editors to preserve. The full version is a superior entertainment on every level, building heart-pounding suspense as Freder and Maria work together to save the children from the rising tide and, in so doing, cement their own relationship."

More from Sean Axmaker (TCM) and Mark Kermode (Observer). And on a related note, Michael Atkinson at Moving Image Source: "[T]he darkling faerie tale films of Murnau, Lang, Pabst, Dupont, May, Wiene, et al. may not have been quite a response to the Great War's scorched earth and soul (which had, in fact, very little to do with the Gothic and/or 'street' style and content of many of the movies), but an expression of German life under the Weimar Republic, a pause-reset gap in German history we tend to overlook, because what came before and after it were so hellacious. A duo of overlapping retros, at MoMA and the Harvard Film Archive, make the point, and quite organically illustrate how much the moment varied beyond the horror films and moral fables that have long become sanctified and petrified in film culture arteries." Weimar Cinema, 1919–1933: Daydreams and Nightmares runs at MoMA through March 7, Decadent Shadows: The Cinema of Weimar Germany through December 19 at the HFA. Here's an earlier, related entry. Update, 11/25: More from Peter Keough in the Boston Phoenix. 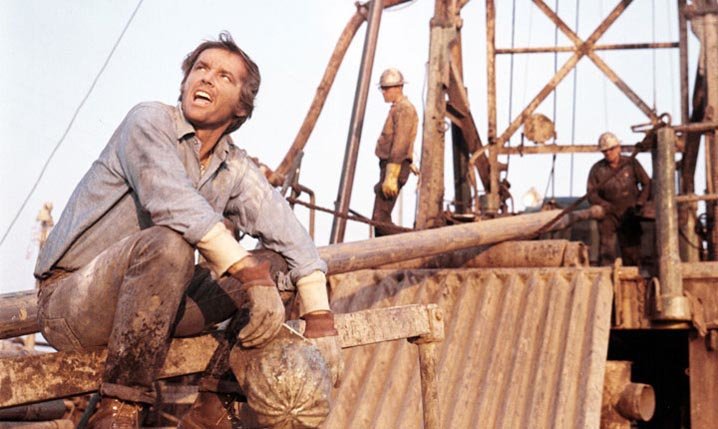 "The story of American cinema's last official golden age — the late 60s and early 70s groundswell known as the New Hollywood — has been told and retold so many times and with such gilded nostalgia that it is by now, at least in part, a sentimental myth," writes Dennis Lim in the Los Angeles Times. "What often gets lost in the hagiographic process are the particularities of the films. One of the great attractions of America Lost and Found: The BBS Story, a new seven-film DVD boxed set from the Criterion Collection, is that several of the period's most iconic artifacts are accounted for along with a few of its weirdest oddities. The set, released in Blu-ray high-definition this week (the standard-definition edition is due out Dec 14), refracts the legend of the American New Wave through the history of BBS, a short-lived but influential production company formed by Bob Rafelson, Bert Schneider and Steve Blauner."

"The working atmosphere at BBS had a spontaneity, lack of pretense, and dedication that stands by itself in my experience," recalls Peter Bogdanovich, "and the often risky and influential work that came out of it, therefore, is no accident." But his post is primarily about "Bob Rafelson's disturbing and memorable, peculiarly American tragedy," Five Easy Pieces (1970). The set also includes Easy Rider (1969), which, of course, "became an enduring pop-culture icon," Bogdanovich's own The Last Picture Show (1971), "which received eight Oscar nominations and won two," as well as "Rafelson's challenging The King of Marvin Gardens with [Jack] Nicholson and Bruce Dern as fractious brothers; Head with The Monkees in an avant-garde script by Nicholson and Rafelson; Henry Jaglom's sensitive and poetic A Safe Place with Nicholson, Tuesday Weld and Orson Welles as a Jewish magician; and Drive, He Said, distinctively and daringly directed by Nicholson." More on Five Easy Pieces from Kent Jones for Criterion.

Moisés Chiullan has more on the set for Badass Digest, as did Manohla Dargis in the NYT last week, and, for Criterion, Chuck Stephens writes, "Head seemed at first glance to have been dreamt up by and made expressly for fun-loving dopers, a live-action Duck Amuck filled with more 'far out!' narrative interruptions and sudden reveals of crews shooting movies within movies than Contempt and Medium Cool combined. But there was much more at stake in the movie than a giddy mind fuck for the chemically altered. What Rafelson and crew were after was a freewheeling deconstruction of the entire Monkees machine." More from Sean Axmaker.

Maximilian Schell's Marlene (1984) screens tonight in New York as part of the Stranger than Fiction series at IFC Center. "Contracted for '40 hours of my blah-blah-blah,' Dietrich, 81 at the time, gives the tetchiest performance — and one of the most quotable — in cinema history," writes Melissa Anderson for Artforum. "Perverse genius that she was, Dietrich knew that adamantly hiding in the shadows in Schell's film would make viewers crave images of her from the past that much more." Bill Weber in Slant last year: "Collaborating with her former Judgment at Nuremberg co-star on a biographical documentary, the legendary siren refused to appear on camera while being interviewed, or to permit Schell to film the décor and memorabilia in her Paris apartment. Instead, Marlene's crew is seen recreating her flat as the movie's main set and aiding their director in piecing together Dietrich's history as he gazes fixedly at celluloid strips of her image — at one point, amusingly anticipating Godard in King Lear, burying his head in a tangle of film." For Filmmaker, Mary Anderson Casavant talks with John Walter (How to Draw a Bunny), who's presenting this evening's screening.

Midnight Eye co-editor Jasper Sharp has curated yet another festival devoted to Japanese cinema, Zipangu Fest, happening in London and Bristol. The event begins tonight with Nippon Year Zero: Japanese Experimental Film from the 1960s-1970s and runs through Sunday. Electric Sheep has an overview of the upcoming highlights.

Fire Beneath the Ice: Films of Iceland is a series "bracketed by quirky comedies, with the dourer stuff in between," writes Kimberley Jones in an overview in the Austin Chronicle. Five films — Baltasar Kormákur's 101 Reykjavík and Jar City, Friðrik þór Friðriksson's Children of Nature, Hilmar Oddsson's Cold Light and Ágúst Guðmundsson's The Seagull's Laughter — screen on five consecutive Tuesdays beginning this evening.