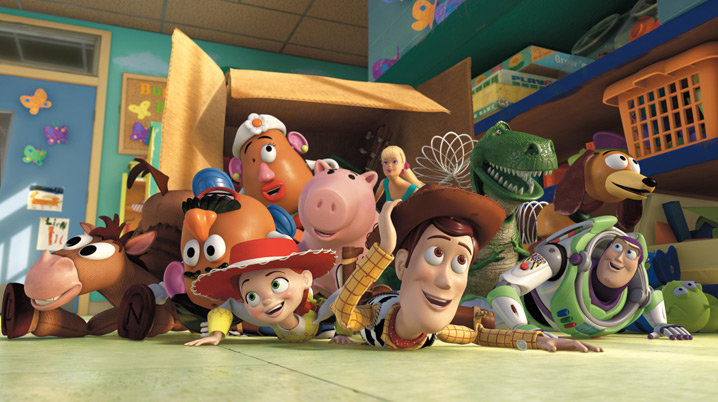 One of the things I always loved about Pixar's work has been its forthright attempts to experiment with their chosen medium (animation) with each of their features, experiments that often combine the best of craft (technology) with the best of art (expression).  For example, the way the water had to be rendered in Finding Nemo so that the audience was aware they were looking through something layered and opaque; or by having one of the main characters in Monsters Inc. be entirely covered in hair, to push the way the physics and lighting of fur could be done expressively.  Maybe the studio has reached the point I find it at with their newest film earlier, but it was Toy Story 3 in which I noticed a problem.  Trying to reach back into my paltry knowledge of art history, I'm furtively trying to find the pictorial movement that the film makes me think of.  Mannered is an apt world, but is Mannerist?  A friend suggests Pre-Raphaelite, which likewise gets at some but not all of what Pixar is up to.

This is a studio so replete with talent that they have the nearly unimaginable resources to pour over every detail of their animated world, going a step beyond even the supposedly comprehensive (and still definitely experimental) "human" digital universes of the Star Wars prequels, Avatar, and Robert Zemeckis' recent films.  Look at the way the toilet flusher moves when Woody steps on it, the refraction when Buzz shoots his laser into the video camera lens in the nostalgic footage that opens the film, the way Rex's mouth moves when he talks...heck, look at how a team of animators clearly puzzled out how every single individual toy would walk and move so that while it is filled with animated life, its physical restrictions, the forms that structure and define its human expressions, are those of the toys they "actually" are.  The world has been built up piece by piece, detail by detail, texture by texture, mechanic by mechanic, comprehensive, fantastic, awe-inspiring...and closed off.

The result is a mise-en-scène that feels hermetic, worked over, completed.  For a film so filled with expression it lacks imagination beyond utterly precise recreation (or expressive recreation to simulate realistic recreation), and its confinement to the playrooms of bedrooms and a day care is easily allegorical for the hermetic playground the animators work over, pass by pass, to create the film.  Another easy, but useful allegory: at the story's core is how toys, lifeless material/materialist objects, obtain meaning through human investment; the film functions in a similar way, the way the street lights gleam and pass across the basin of a garbage truck through a small opening, the star-shaped stickers a child has placed on her hardwood floor, the way a kid would scoot a wheeled desk chair around his room...how all these categorizable notes from the real world obtain an abstract, emotional, moving expression by the care of the animators.  On an object by object, moment by moment level, the film is nearly overwhelmingly dense with such minute material investment, yet as a film, it seems bogged down in replicating and investing in all these real world details to such a degree that imagination, one of the things most easily discoverable in animated works, seems evacuated.  You only have to look at the tortilla gag in the movie to see how a touch of the unexpected can produce surprising, strange and surreal results.  For me, there were far too few questions thrown at the film world ("what if?"...) the studio has created and far too many assurances ("Yes, that looks just right!").  A beautiful, overworked piece of animated sculpture.