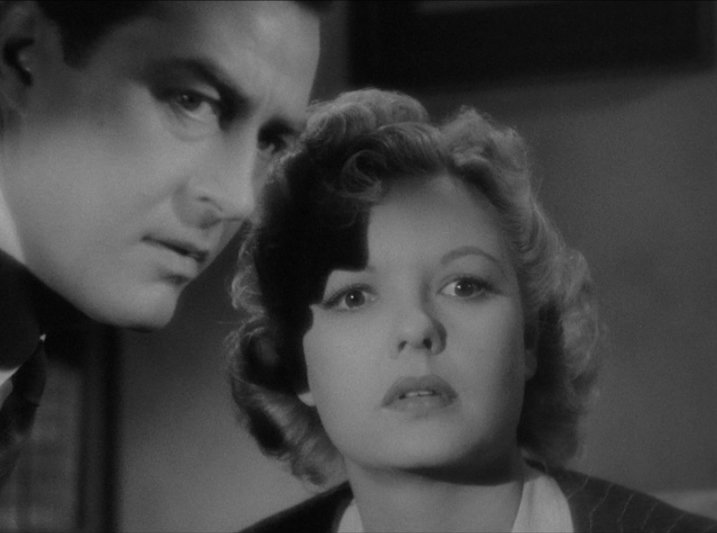 Ministry of Fear is a film that wouldn't work if not for insanity.  The arc of the drama would be too haphazard, the explanations too unsatisfying, and the actions of its villains, to say nothing of its hero, too wildly irrational.  But this is Europe in 1944, and irrationality is the order of the day.  It's in the drone of planes overhead, the casual talk of blackout time, and the suspicious glances on the street.  Because the world waiting for Stephen Neale (Ray Milland) when he gets out of the mental hospital has gone just as mad as him.

A wartime thriller from Fritz Lang (let's call it a noir), Ministry of Fear is generally regarded as one of the German director's more obscure American films, a status that will hopefully shift now that it has been released, and thus quasi-canonized, by the Criterion Collection.  Lang himself was cold towards the film, and on the face of it, this tale of espionage may sound like one of his most formula-bound: a riff on The 39 Steps by way of Graham Greene, complete with a spy network, a falsely accused "wrong man," and a vital state secret in need of protection.  But if the film offers one lesson above all others, it's that "faces" shouldn't be trusted, and much of Lang's seemingly generic work turns out to be his most compelling.  If his more famous German films are defined by their kineticism—their mastery of new technology﻿, the scale of their set-pieces﻿, the ease with which they define their own genres—his American films are distinguished by their hermetic atmosphere: the way the precise shadows, off-kilter geometry (which Ministry has in spades), and feverish music add up to create a feeling of "interiority," as if all the action is not unfolding in any "real" world, but inside the characters' minds.  Accordingly, many of Lang's Hollywood films demonstrate an uneasy mingling, a mixture of his highly atmospheric mise en scène﻿ and the narrative/genre conventions of the day.  And the way this tension resolves itself (or does not) is a key part of their continual fascination.

Consider romance—a staple of Hollywood's diet, and one of Hitchcock's great strengths—and the oddly twisted, deceptively complicated form it takes in Lang's films.  Lang is sometimes described as a "schematic" filmmaker, and indeed, love as it exists in his more schematic films like Beyond a Reasonable Doubt is less a matter of interpersonal warmth and more of a mathematical force, moving his characters towards their destination as surely and impartially as the tides.  Yet there is another, warmer kind of romance that in Lang's world, one that is sentimental but not safe, nearly poetic in its pop-grandeur and almost never carrying the giddy thrills of The 39 Steps or North by Northwest.  It is the way romantic love often becomes the last, best chance for a cracked soul to find redemption.

All of which brings us to one of the subtler elements of Ministry of Fear: the treatment of its love interest, who is one of the most intriguing in the Lang canon not for what the film explicitly says, but for what it leaves peeking out of the shadows. She is Carla (Marjorie Reynolds), an Austrian immigrant who escaped to London with her brother Willi (Carl Esmond).  After Neale unwittingly crosses paths with an organization of spies, he meets Willi and Carla, and Carla becomes his aide in untangling the conspiracy.  Very little is done to address her inner life, making her something of a cipher—an unknown character among many.  Naturally, there is a chance for romance between them, and at the break between acts two and three (is there a more conventional place?) they confess love for one another.  It comes as they plan their next move, and Neale talks about what to do when the paranoia passes and the film is over.  Their dialogue goes like this:

NEALE: Someday, when I get back to that quiet life, I want to ask you if you'd be interested in it, too.

CARLA: Willi asked me if I was falling in love with you.

It's not exactly Lubitsch, and reading it on the page, you could be forgiven for thinking that it sounds like a template, or an obligation between the hero and his heroine.  But then you have to take into account the way the scene is played: Marjorie Reynolds, her gaze fixed off-screen and never blinking, her eyes wide and round but too shy to bulge, her voice so slow and steady that she sounds as if in a trance. 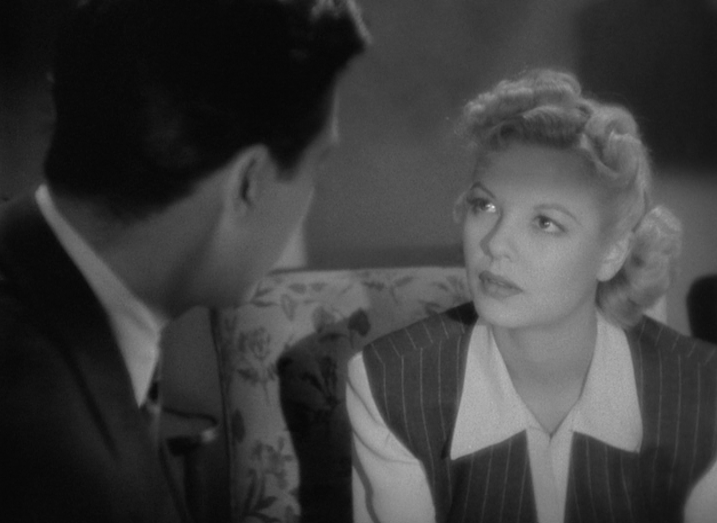 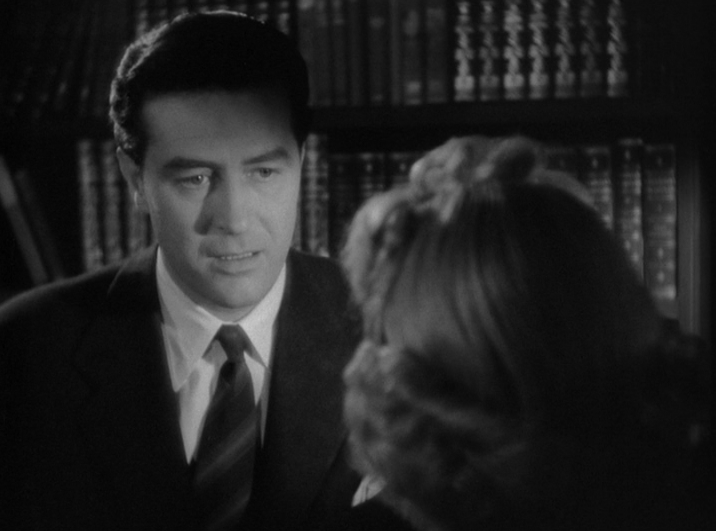 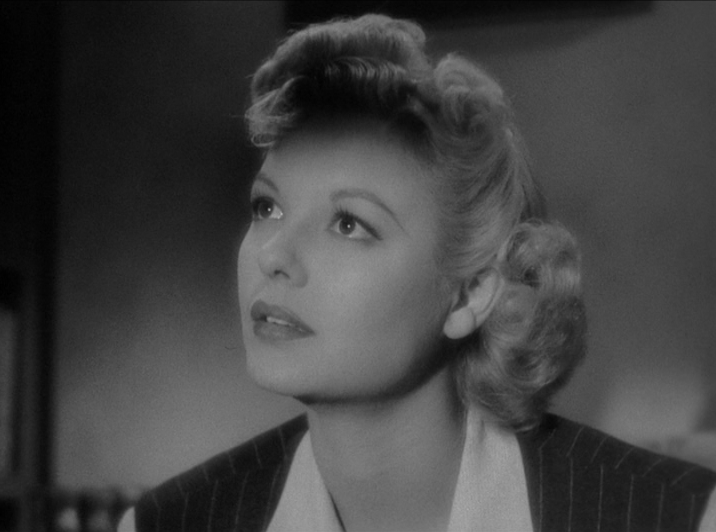 She and Neale do not embrace, as Cary Grant and Grace Kelly might on another screen, but slowly lean forward and touch at a single point.  The movement is tentative, smooth, mechanical but not cold, and peculiarly poignant in how utterly chaste it is.  As a study of faces—Milland's and Reynolds'—the metaphor that comes to mind is children in adult clothing.  Either that, or robots learning to love. 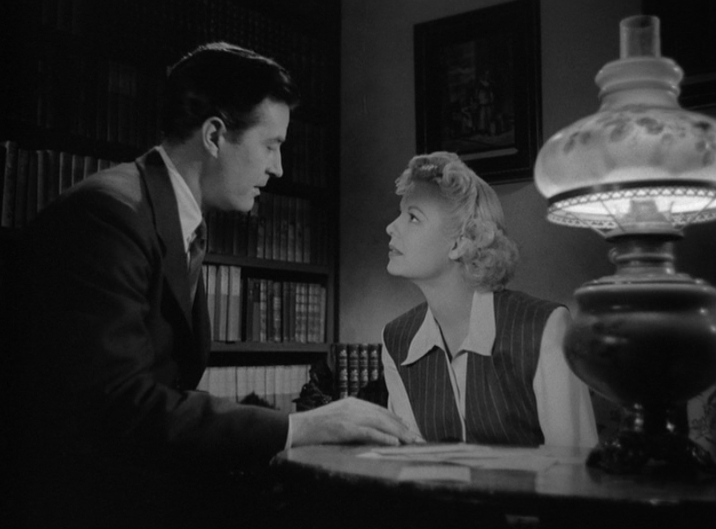 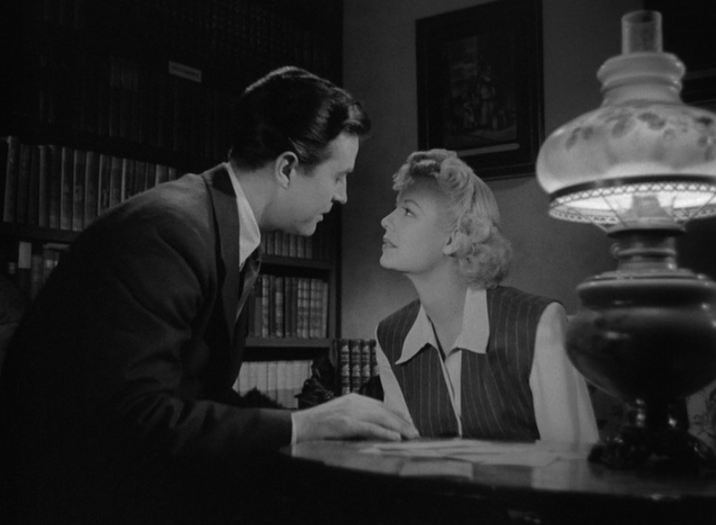 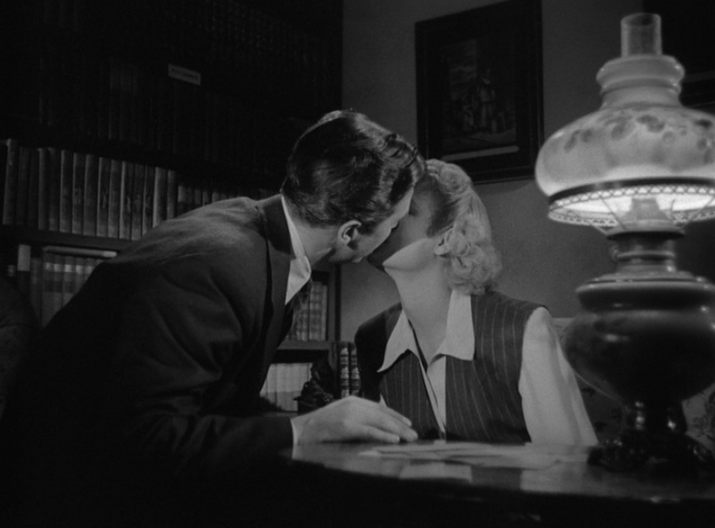 It's a magnificently skewed way of handling the scene, and as the centerpiece of the film's romantic thread, their brief exchange casts tantalizing questions.  After all, what is her inner life?  We know next to nothing about her, and all she knows about Neale is that he's wanted for murder (which he claims he didn't commit) and that by his own admission, he just got out of a mental asylum for mercy-killing his last wife.  Yet here she is, like a cockeyed angel, drawn to him with understanding and devotion.  It's clear from the start that Neale's mind is a muddle, but keep your eye on her during their scenes together—doesn't the film open up the possibly that she's not quite all there herself?  Given everything about Neale that signals menace or at least instability, doesn't her growing affection—normally a fait accompli﻿ when there's always a girl in the picture—carry a hint of the uncanny?

And then comes her final and most impulsive act: a quick jolt of fratricide in an unlit room, treated just as obliquely but too sharp to ignore.  "You wouldn't shoot your brother, Carla," hisses Willi, who is revealed (irrationally) to have been the crooked mastermind all along.  There is a brief hesitation, and then with a bang, the pure-black screen is lit by a muzzle-flash and Willi is dead.  So Carla's own surrender to wartime madness happens off camera and in the dark, any inner struggle visualized only by a (suspiciously?) short pause on an empty screen.  No one in the film comments on it—there's little time before she and Neale are on the run, hand in hand, towards the big finish—but the look on her face afterward is very nearly blank.

Ministry of Fear comes with an epilogue: a jarringly cheerful shot that the studio tacked on, with Reynolds and Milland﻿ driving off in the sun to get married and making a corny joke along the way.  Lang hated it, and it's not hard to see why.  It still provokes the wrong kind of laughs, and conventional wisdom says that the film would be more pure if it had the decency to be 15 seconds shorter.  But films take on a life beyond any of their creators, even those famed for precision, and the scene is so bright, so sunny, and so out of sync with what came before it that the transition is almost unintentionally abstract.  It's as if a nightmare turned on a dime to the happiest of fantasies, and studio meddling has yielded to dream logic.  (The Woman in the Window is the only American Lang to show the hero waking up at the end, but those that leave that distinction up in the air are far more satisfying).  It's by far the least reputable moment in the film, but setting the couple's awful joke aside, maybe the two of them deserve to drive off in the sun after all.  Could it be that this tightly constructed jigsaw thriller also covertly works as one of Lang's most bizarre love stories, where a cracked man and a cracked woman meet in a cracked world?  Nothing could be more romantic.  Or more noir.