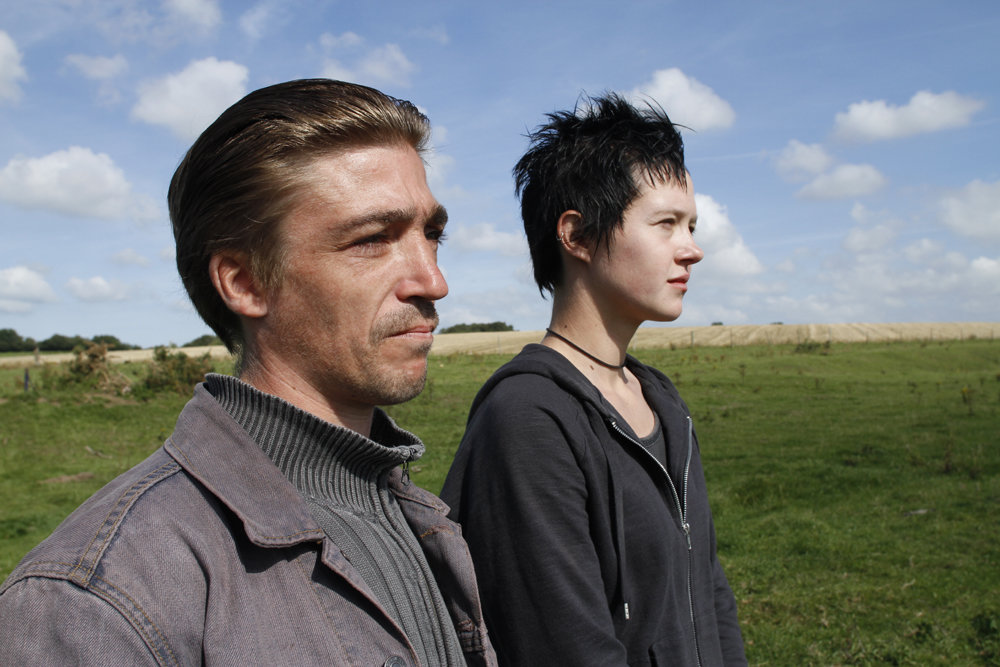 Entering its second year, the Museum of the Moving Image’s First Look series provides a strong, welcome antidote to the generally anemic cinematic landscape that is January. Its eclectic selection of undistributed features and shorts, programmed by Dennis Lim, Rachael Rakes, and David Schwartz, occasions an invigorating mixture of moods and approaches from established as well as emerging directors. It’s indicative of the series’ dedication to distinctive, often divisive cinematic voices that Bruno Dumont’s decidedly non-crowd-pleasing Hors Satan was chosen as the opening night film nearly two years following its Cannes premiere.

Whereas earlier films like Twentynine Palms or Hadewijch pushed the French director’s worldview in new directions, Hors Satan sits solidly in Dumont’s comfort zone, down to the cryptically religious title that links it to his debut, The Life of Jesus. His protagonist is a drifter with a scruffy, narrow face like Pasolini’s proletarian Christ, at times a vaguely glowering mug in close-up but mostly a wandering figure in panoramic long shots of the hills surrounding a bucolic village. Following him like a solitary disciple is a local spiky tomboy with a penchant for silently resting her head on his shoulder, two lumpy creatures feeling the weight of the world on them. Dumont’s sense of unappetizing materiality—a pipe dumping sewage into a pond, a sex scene abruptly turning grotesque and foamy—is as tangible as his juxtaposition of salvation and destruction is utterly muddled. The result is a half-ravishing, half-risible portrait of the trail of murders and miracles left behind by a holy demon, the most Bernanos-esque work yet by an artist whose films about numb characters are increasingly in danger of becoming numb films. 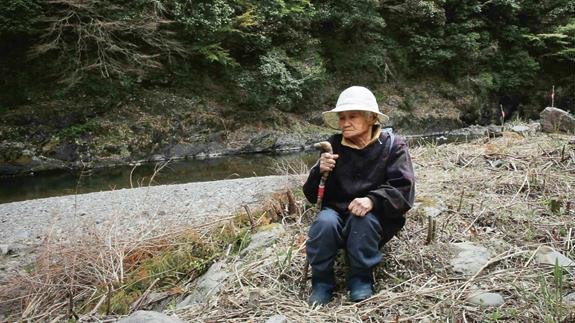 Slender but graceful, Pedro González-Rubio﻿’s Inori is a far less punitive view of isolated communities on spiritual divides. The mountainous Japanese village of Kanagawa is the setting, a realm of stilled landscapes and slowed-down rhythms. With all of the younger residents having left in search of jobs, the only remaining inhabitants are a handful of elderly dwellers literally waiting for the sun to set; their mundane activities—sweeping sidewalks, placing flowers on graves, flipping through picture albums, praying to private shrines, ambling down to a makeshift clinic—make up the bulk of this gentle documentary. Death and the hereafter (casually referred to as “the other side”) are palpable presences in this twilight netherworld, where people band together out of necessity as much as out of emotion: in an oddly funny shot, a couple sitting on the floor by a boiling kettle are asked about their marriage, and with a fond shrug the husband says that they don’t have the strength to live alone. The subject sounds forlorn, but González-Rubio﻿ brings to it the alert, virginal gaze he lavished on the coral-reef family in Alamar, a connection of people and environments worthy of a veteran like Jan Troell.

No less spectral, Thom Andersen’s Reconversão is a rigorous and serene meditation. The opening follows a chunk of granite as it’s lifted out of a pile of smoldering rubble and cut into one of the slabs comprising many of the buildings of northern Portugal. Eduardo Souto de Moura, the acclaimed architect whose projects Andersen visits throughout the film, is quoted early outlining his approach to his art: “Don’t strive for completeness.” There’s a continuous play of interior and exterior, construction and vegetation as the camera contemplates a swimming pool in the middle of a monastery, a house abstracted to a wall and window, a bare tree framed by concrete pillars. More than anything, Andersen and Souto de Moura are obsessed with ruins, with fragmented cities and the ephemeral qualities of stone itself. People are hazy presences in this ruminative appreciation of forms, seen fleetingly skidding from still frame to still frame; rock and glass and aluminum are the main players, a monument dedicated to a political hero really only becomes expressive once a crack reveals the flow of water underneath it. As in Los Angeles Plays Itself, Andersen here is an exploratory eye after visual (hence, cinematic) manifestations of the past, a historian of spaces. 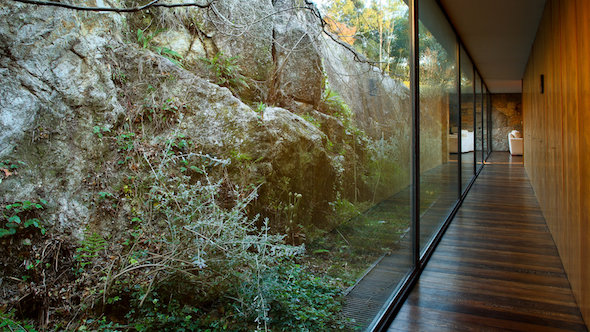 More investigator than historian, Philip Scheffner describes his documentary Revision as “a story with many beginnings.” The story being told is a 1992 incident which left two dead bodies in a corn field near the German-Polish border. It was at the time dismissed as a hunting trip accident, even though the shooting of the two Romanian immigrants was widely acknowledged as part of a wave of xenophobic violence and vandalism taking place in the newly unified Germany. Twenty years later, Scheffner seeks to give the unresolved case the scrutiny it never officially got, talking to family members, neighbors, journalists, and prosecutors. Rather than straightforward interviews, the camera lingers on close-ups of people silently listening—heads nodding, eyes darting, protesting over a particular line—as their recorded responses are played back to them. People lose their voices in an unjust system, laws go around in circles: In the meadows where the crime took place, the shadows from slowly rotating wind turbines skitter across the screen like phantoms or unsettled memories. A tale of obscured vision and precariously preserved records, Scheffner’s film aims to be a revision not only of information and victims but also of conventional documentary technique itself.

Having made an arresting feature debut with last year’s Neighboring Sounds, Kleber Mendonça Filho presents a number of early shorts which should illuminate the Brazilian critic-turned-filmmaker’s study of life in the northeast city of Recife. Two of them, The Little Cotton Girl and Green Vinyl, are quasi-horror fables envisioned as smudged still images melting into each other à la﻿ Chris Marker, bringing to the surface Mendonça's poker-faced surrealism and fascination with subterranean, cyclical fears. The standout short, however, is the breezy Eletrodoméstica, a 20-minute rhythmic bit of Frank Tashlin set in what could easily be the same gated community where Neighboring Sounds unfurls. More explicitly satirical and less baleful than Mendonça's feature, it nevertheless anticipates several key images in its account of suburban characters unconsciously imprisoned behind barred windows and at the mercy of their own humming machines. 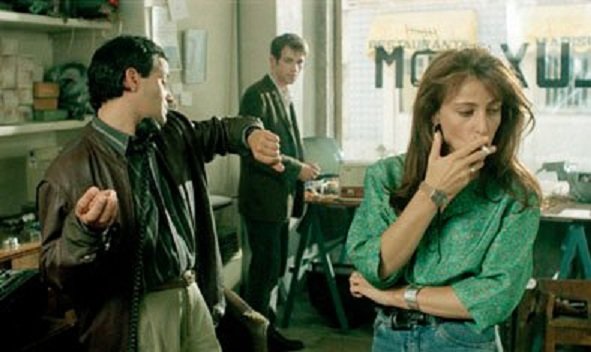 One last emergence from the past: Manuel Mozos’ Xavier, a troubled 1991 production which, following the bankruptcy of one of its producers, could only be finished in 2002. It’s fitting that fellow Portuguese auteur Miguel Gomes is helping make viewers aware of this film in various festivals, as much of the idiosyncratic poetry of his Tabu seems directly influenced by Mozos’ elliptical melancholy. The plot of Xavier could be from a Jean Eustache or James Toback film, a moody circle of relationships where the simmering passions suddenly crystallize with a glance or a gesture. It’s a sort of buddy picture between humble artistes and rascally roommates, a tale of familial pressures and raptures, a snapshot of Lisbon viewed in the 1990s like Rome in the 1960s, a withdrawn youngster groping for his identity while reciting a Keats poem (“There Was a Naughty Boy”) in English class. An affecting and implosive work brimming with mysterious moments, like when a meeting in a restaurant is glimpsed from the outside as the window turns blurry from a sudden downpour. It’s the kind of discovery that makes showcases like First Look so vital.