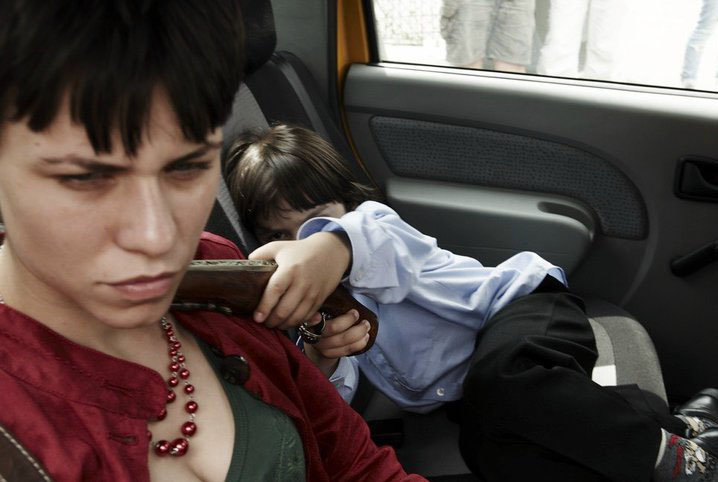 "The premise is deceptively simple," writes Peter Gutierrez at Twitch. "A young woman named Matilda — played by Ana Ularu with such ferocious self-possession that it's impossible to take your eyes off her — is released from prison for 24 hours to attend her mother's funeral. In the course of the day she visits three key people in her life. At first glance it seems that a rather standard domestic drama may be unfolding... but then gradually we come to realize why she was in prison, what she was doing with her life before her conviction, and what crazed schemes of redemption may be incubating in her head. As one act clicks neatly into the next, we encounter characters who are each more unsavory than the last. In this way, poised between a thriller with psychological dimensions and an intense character study, the true generic outline of Outbound begins to take shape: it's a full-fledged Eastern European Noir, and a great one, too."

Chris Cabin in Slant: "As the anticipated stateside release of Cristi Puiu's extraordinary Aurora draws closer, the Romanian New Wave rolls on with Outbound, the debut feature from Bogdan George Apetri, whose credits as a producer on Eric Mendelsohn's lovely 3 Backyards and Florin Serban's Emigrant lend him ample art-house cred from the outset. Compounding this with the fact that the film's story was dreamt up by 4 Months, 3 Weeks and 2 Days helmer Cristian Mungiu and his Tales from the Golden Age collaborator Ioana Uricara, Outbound arrives with promise that this Dardenne-lite story of a young mother getting her affairs in order before beating a path out of town while on a day pass from jail ultimately can't completely live up to."

"Unfortunately, while 4 Months was precise in its journey, Apetri's film is too murky and loose to have the same emotional effect," finds Alan Bacchus at Daily Film Dose.

IndieWIRE interviews Apetri. Outbound screens tonight at MoMA and on Saturday evening at the FSLC.