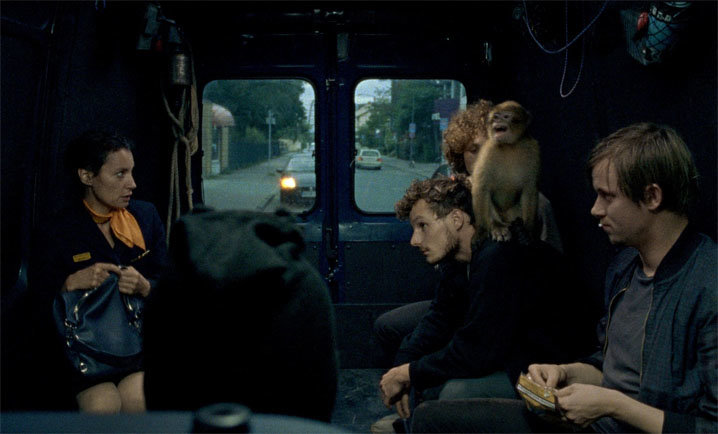 "The sometimes hard-to-distinguish variances between being caged and allowed to roam free inform the trials and tribulations of the middle-aged woman at the center of Pia Marais's second feature, At Ellen's Age," begins Chris Cabin in Slant. "The eponymous heroine, a flight attendant played by the magnetic Jeanne Balibar, arrives home from a flight to the news that her partner (Georg Friedrich) has knocked up another woman. The news of this long-gestating infidelity, along with some undisclosed medical results she receives that are assumedly not pleasant, leads to Ellen staging a nutty on a flight out of Africa, leading in turn to her immediate dismissal from her job."

Ed Champion picks it up from there: "She then begins a journey of aimless wandering and inhabiting, not unlike Lost in Translation‘s Bob Harris (but without the wealth or the fame). She kicks around in random hotel rooms, hitting listless parties and often hiding in bed after everyone has left. She becomes an unexpected surprise for room service and for the next guest checking into the room. Through a series of odd run-ins, Ellen finds herself chasing a taxi that contains her luggage while inside a van containing animal rights activists. She ends up living with these activists, still wearing her flight attendant uniform as if it's a skin that she can't seem to shed. The interesting juxtaposition of Ellen against animal rights activists suggests that Ellen herself might be a type of human animal."

Adam Nayman for the L: "Velocity is very much Marais's style: the early scenes of At Ellen's Age have a careening quality that's a little reminiscent of the vertiginous speed of Olivier Assayas's early films. Marais also shares Assayas's talent for filming the limnal, anodyne spaces of airports and airplanes, and there's a clear progression in the film's shift from interior to exterior spaces by the end." Marais tells him that it was important "'to keep the character from simply being a lost case or a victim. [The film] is very much about maintaining one's dignity when life becomes turbulent.' This same combination of fascination and empathy underpinned Marais fine 2007 debut The Unpolished, a portrait of adolescent despair with certain superficial narrative similarities to Christian Petzold's 2002 film The State I'm In — the film that heralded the formation of the so-called 'Berlin School.' Marais actually attended the dffb (Berlin Film and Television Academy), but hasn't yet been pigeonholed in the company of fellow grads like Angela Schanelec and Thomas Arslan. 'I think in a very small way, I can fit myself into the general picture here,' says Marais. 'But I have never entirely understood what exactly this term ["Berlin School"] really means. I think that these filmmakers all so unique. I think perhaps they simply are auteur filmmakers, and that is what they have in common.'"

Last fall, the New York Times' Manohla Dargis wrote from Toronto: "As she moves Ellen into the world, the director Pia Marais creates an intimate character study that eventually and quite touchingly opens into a larger story about the pathos of our search for purpose." For Michael Tully, writing at Hammer to Nail, also from TIFF, "At Ellen's Age is a strange modern spin on the mid-life crisis drama that feels all the more honest because of it's head-scratching unpredictability. "

Screens this evening at MoMA and on Saturday afternoon at the FSLC.

Update, 3/28: For Anna Bak-Kvapil, writing at Not Coming to a Theater Near You, Ellen's "emptiness leaves the film with a hollow center. As Ellen continues to follow her mercurial impulses, we’re left feeling as lost as she does."