We begin again with Andrew Schenker in Slant: "If the early films of Jia Zhangke employed a rigorous fixed-take aesthetic to pin his dead-end kids to their rural northern Chinese surroundings, then, in Winter Vacation, director Li Hongqi channels instead the absurdist formalism of Swedish filmmaker Roy Andersson to depict a similar cast of characters stuck in an identical provincial setting. While Andersson builds his comic miserablism directly into his mise-en-scène, a succession of formalist recessionals in which his hapless characters remain trapped, Li, just as concerned with the exact placement of figures in the frame, strips down the Swede's deadpan minimalism to the point where there's barely anything left."

When Sean Axmaker caught it in Vancouver, he reported back to the House Next Door, calling this winner of the Golden Leopard in Locarno "a portrait of passivity at its nadir, an absurdist take on 'Whaddya wanna do tonight, Marty?' with the youth of central China as the hopeless of the future. It's scorchingly funny, a hysterical satire of social conformity in stasis directed at a snail's pace, observing the cycles of meaningless rituals to their inevitable ends like it's a slapstick act under a microscope (VIFF programmer Mark Peranson liked to call it 'South Park in slow motion,' which is as expressive a description as any)."

Winter Vacation screens this evening at the Film Society of Lincoln Center and on Tuesday at MoMA. 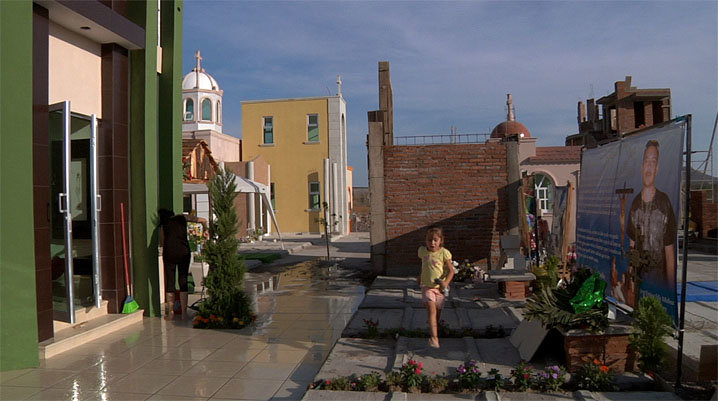 "There is a new form of bling in Mexico: pimped out mausoleums." Joe Bendel: "Tacky even in death, the drug cartels have kept the staff of Culiacán's so-called 'narco-cemetery,' quite busy. Documentarian Natalia Almada captures a sense of the everyday turmoil engulfing Mexico through the eyes of Martin, the cemetery night watchman in El Velador (trailer here)… Clearly, El Velador addresses an issue of critical importance, but Almada's oblique perspective might not be the most efficacious. Still, its unvarnished portrait of a state teetering on the brink of complete lawlessness is a timely wake-up call. Indeed, it is conceivable we could soon find our southern neighbor dominated by a criminal enterprise, not unlike Hamas in the 'Palestinian Authority' or a Lebanon controlled by Hezbollah. Defiantly unhurried, El Velador is truly for a select documentary audience, but it is perfectly in keeping with the programming aesthetics of ND/NF."

"Lining the central road through the cemetery and extending several rows back are a forest of elaborate mausoleums that look like high-end haciendas in miniature," writes Elise Nakhnikian at the House Next Door. "A construction crew comes in every day to build more and Almada is there to document their work, her lingering close-ups of bare feet and deteriorating shoes clinging to precarious perches personifying the grace and resilience that are characteristic of Mexico's campesinos. At the same time, the static-y images and voices from TV and radio news that cut in at intervals to report on the progress of the drug wars ('The body of a young woman was found chopped in pieces,' one announces) and the wails of the bereaved that float up from the funerals below as the men work are a constant reminder of the horrors that threaten their way of life."

IndieWIRE interviews Almada and Altamura Films has a set of clips. El Velador screens this evening at MoMA and again on Tuesday at the FSLC.