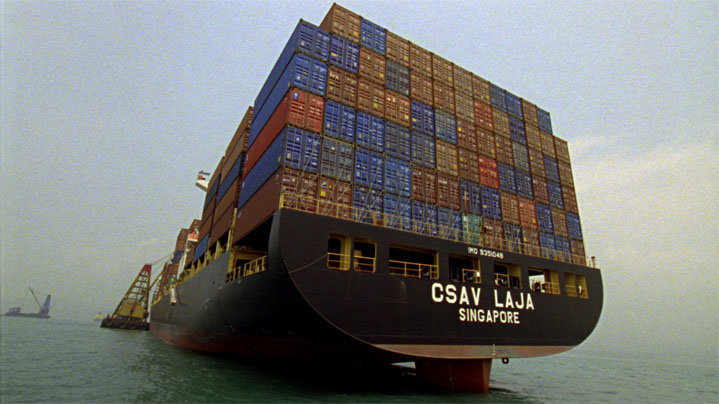 A highlight of the "Illuminating the Shadows" conference: the first public American screening of Allan Sekula & Noël Burch's The Forgotten Space (an official "premiere," co-presented by the Whitney, is slated for May 15th at Cooper Union). Considering how overloaded with invective and metaphor-chains ("a velvet glove for the iron fist" is typical) Sekula's pamphlet-ready narration is, you'd expect a certain degree of pat neatness from the film. But The Forgotten Space—a documentary that is ostensibly about intermodal containers, and how their rise into prominence since the 1950s as the primary way of transporting goods by sea and rail has affected economics, landscapes, cities and labor—refuses to be compartmentalized; its parts, unlike its subjects, are not self-contained or ready-to-assemble, but are instead incomplete sections that play off of one another. These pieces become themes to be re-introduced and re-arranged. Furthermore, for a film about transcontinental drifts—not just of container-laden ships, but of the economic practices that come with them—The Forgotten Space has no clear start or destination; it's a series of midpoints, every scene beginning in media res and offering no prognosis (whether within the shots themselves or within Sekula's narration) for a future conclusion.

Every one of the pieces that makes up the film captures some kind of transition: Filipino maids picnicking on their day off, resting between two working weeks; the Mariners' Club of Hong Kong, where sailors sleep between trips to the sea; a shantytown in California, whose residents live in a perpetual limbo between homelessness and employment; the Flemish town of Doel, slated for demolition and slowly being abandoned by its residents; the container ship Hanjin Budapest, whose points of departure and arrival are never shown and whose crew of Indonesians and Koreans are forced to communicate in sign language; the Hong Kong Sea School, whose pupils are halfway between a life on the streets and a career in the hotel industry; a factory in Guangdong whose goods, made for Wal-Mart, are never seen in their fully-assembled states; the same factory's cafeteria, where the workers are seen taking their mid-day breaks; two young Chinese women sharing a cramped apartment, who are trying to make a life for themselves in the city after leaving their villages and whose conversations, dominated by their memories of school and desires to buy fancy bras, suggest that they're at the halfway point between adolescence and adulthood; a Rotterdam shipyard whose few remaining employees will eventually be replaced by full automation; and the Guggenheim Museum in Bilbao, a meeting of commercial and creative forces built on the banks of the Nervión River, whose waters are themselves in transit to the Atlantic.

"Show enough effects and an audience will deduce the causes" is a basic tenet of filmmaking, but neither Sekula nor Noël Burch seem all that interested in effects, which are final products; The Forgotten Space is about the state of being effected, before an effect is finalized.

The Super 16mm camerawork, with its emphasis on geometry, scale and shape (all seemingly made with the editing in mind; one early cut shows just how easily "nuclear cooling tower" visually rhymes with "windmill"),  has a sort of arty journalism to it, but, unlike co-cinematographer Wolfgang Thaler's work with Ulrich Seidl, it doesn't depict a failed world, merely one failed by capitalism.

This is an important distinction: unlike Seidl, who over the years has gravitated towards a view of human beings as malfunctioning machines, poorly served by their instincts and their society, Sekula and Burch seem to actually like people and the cultures they've created for themselves, and are capable of depicting all sorts of mundane pastimes—guitar-playing, bingo, reading newspapers, basketball, riding bicycles, sight-seeing—without a patina of sticky, self-serving sadness. The title of a film Thaler photographed for Seidl, Import/Export, could easily be the title of this one; it isn't, and the title Sekula and Burch have chosen suggests an old-fashioned romanticism (and unlike Import/Export, which cynically/cyclically sums up the action of Seidl's movie, the title The Forgotten Space is, like every scene of the movie, more of an evocation of the tone that a encapsulation of the contents). The Forgotten Space laments and damns so much, yet it's ultimately a romantic film (maybe that's no surprise, considering all the lamenting and damning), born out of romantic ideals—a love of landscapes, local architecture, the sea and of the human capacity for work. In short: a secretly hopeful film on an obviously dispiriting subject, made by soft-hearted hardliners.