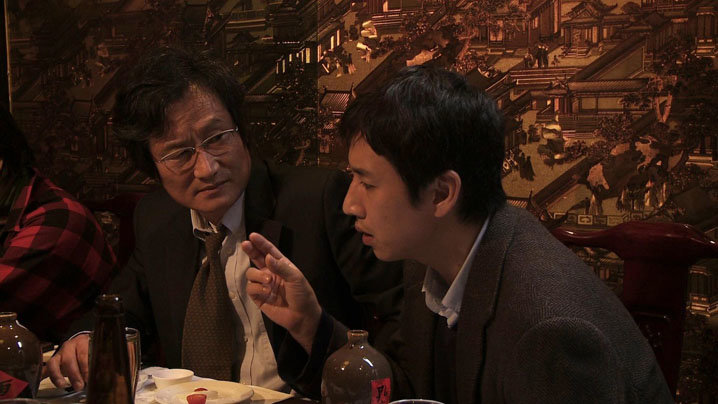 The 48th New York Film Festival will open on September 24 with David Fincher's The Social Network and close on October 10 with Clint Eastwood's Hereafter. Along with 28 features, this year's NYFF will also present two Masterworks programs, Elegant Elegies: The Films of Masahiro Shinoda and Fernando de Fuentes' Revolutionary Trilogy, as well as The Cinema Inside Me: Olivier Assayas and Views from the Avant-Garde. What's more, the Film Society of Lincoln Center promises details are on the way on ten "special event screenings."

David Fincher's The Social Network. Opening night. Watch the trailer. World premiere. From the Film Society: "Brilliantly directed by David Fincher from a razor sharp script by Aaron Sorkin, The Social Network is a scintillating play-by-play of the meteoric rise and acrimonious fall of the founders of Facebook — Harvard undergrads who developed their zeitgeist-altering phenomenon out of their dorm rooms... and ended up suing each other for millions. Jesse Eisenberg turns in a mesmerizing performance as the genius but socially maladroit CEO Mark Zuckerberg, whose flash of social-networking inspiration occurs during a drunken act of internet revenge on an ex-girlfriend, with Spiderman-to-be Andrew Garfield as nice-guy CFO Eduardo Saverin and scene stealing Justin Timberlake as Napster co-founder Sean Parker. Much more than a ripped-from-the-headlines docudrama, The Social Network is a timeless study of unchecked ambition, status and privilege in America, and those other, more precious things money can't buy."

Clint Eastwood's Hereafter. Closing night. "As so beautifully evident in Hereafter, Clint Eastwood continues to make the most daring, provocative films in America," says Richard Peña, the Film Society's Selection Committee Chair and Program Director in today's press release. More, albeit not from Peña: "Hereafter tells the story of three people who are haunted by mortality in different ways. Matt Damon stars as George, a blue-collar American who has a special connection to the afterlife. On the other side of the world, Marie (Cécile de France), a French journalist, has a near-death experience that shakes her reality. And when Marcus (Frankie/George McLaren), a London schoolboy, loses the person closest to him, he desperately needs answers. Each on a path in search of the truth, their lives will intersect, forever changed by what they believe might — or must — exist in the hereafter."

Apichatpong Weerasethakul's Uncle Boonmee Who Can Recall His Past Lives. Winner of the Palme d'Or at Cannes this year; see the roundup for that big first round of reviews.

Michael Epstein's Lennon NYC. World premiere. From the Film Society: "In 1971, John Lennon arrived in New York City and felt re-born: at last living in the country that had dominated his artistic imagination, Lennon and his new bride Yoko Ono found in the city the perfect blend of music, politics, culture and lifestyle. But those heady first years eventually gave way to a dark period in which both Lennon's musical career and his personal life almost ran aground — until once again New York City came to his rescue. Using remarkable, rarely seen footage and interviews with many who were close to John, filmmaker Michael Epstein has created a moving, revealing portrait of the music legend's New York years, detailing not only his triumphs but also some hard times over which he so beautifully recovered in the final years of his tragically curtailed life."

Alexei Fedorchenko's Silent Souls. From the Film Society: "Ancient customs and traditions live on in the wake of the former Soviet Union in Silent Souls, yet another bracing sign of life for serious filmmaking in the now-fragmented land. A brooding, poetic, hauntingly beautiful art film of the old school, albeit shot through with a modern frankness about society and sex, this short feature from Ukranian director Aleksei Fedorchenko centers on a unique sort of road trip. Imposing tough guy Miron requests that taciturn writer Aist accompany him on a long journey to dispose of the remains of his wife, whose body they transport in the back of the car. As they traverse the evocatively bleak landscape, Miron, according to custom, fills the hours relating the most intimate details of his relationship with his wife, leading to a surprising finale. Drenched in melancholy and haunted by an inescapable past, this is an exquisite work by a quickly rising director."

Jorge Michel Grau's We Are What We Are. Cannes.

All told, this line-up rocks the house. Everybody be sure to catch THE ROBBER, which has already played Seattle, so it won't be at TIFF. Mon Aug 16 15:27:29 via web

Hong Sang-soo's Oki's Movie. Image above. Premiering in Venice, where it'll close the Horizons section. From the Film Society: "NYFF perennial Hong Sang-soo's latest may be his wittiest — and his most deeply felt — work to date. Toggling between the present and the past, reality and fiction, and divided into four chapters (and different points of view), Oki's Movie recounts the amorous and artistic adventures of talented young director Jin-gu (Lee Sun-kyun), his middle-aged cinema instructor, Professor Song (Moon Sung-keun), and Oki (Jung Yumi), the woman who loves them both. As 'Pomp and Circumstance' wryly plays throughout, the protagonists nobly fumble their way through romance and work, culminating in Jin-gu's disastrous post-screening Q&A. Hong's eleventh feature is a comedy with tremendous emotional heft, concluding with a heartbreaking précis on the vagaries of the heart and the terrors of aging."

Abdellatif Kechiche's Black Venus. Premiering — and competing — in Venice. From the Film Society: "In his unforgettable telling of the short, deplorable existence of the 'Hottentot Venus' — née Saartjie Baartman, a slave from Cape Town who was exhibited as a freak-show attraction in early nineteenth-century Europe — Abdellatif Kechiche (The Secret of the Grain) delivers a riveting examination of racism. Gawked at and groped in grimy carnivals in London and, later, high-society Parisian salons, Baartman soon becomes the object of prurient fascination of French scientists, obsessed with calibrating every part of her anatomy — particularly her enlarged buttocks and genitals. Though Baartman's life was unspeakably grim, Yahima Torres's remarkably complex portrayal of the title character reveals not just a mute symbol of victimhood but also a woman capable of fierce defiance."

Also, ROBINSON IN RUINS is strong. Not *quite* up to IN SPACE levels of magnificence, but a stark, plangent vibe befitting Cameronian era. Mon Aug 16 15:31:17 via web

Patrick Keiller's Robinson in Ruins. Screening in the Horizons section at Venice. From the Film Society: "The British filmmaker Patrick Keiller is a master of the personal cine-essay and the political landscape film. As in his previous psycho-geographic tours London (1994) and Robinson in Space (1997), this new work purports to be constructed from footage recorded by Keiller's fictional alter-ego, the peripatetic researcher Robinson. Striking images of nature and marginal sites (military bases, opium fields, lichen growing on a traffic sign) are paired with the measured tones of a narrator (Vanessa Redgrave) who recounts Robinson's progress through the south of England and pieces together his notebook of musings on, among many other subjects, agriculture, architecture, the collapse of late capitalism and the extinction of the planet. Packed with secret histories, hidden connections, and a few whimsical fictions, Robinson in Ruins is a work of towering ambition and sly humor, densely informative but never dry, slicing through space and time with wit, alacrity, and eccentric intelligence."

Pablo Larraín's Post Mortem. From the Film Society: "A literal and figurative dissection of his country's turbulent contemporary history, Chilean director Pablo Larraín's third feature is another highly original, darkly comic mix of the personal and the political from the director of Tony Manero (NYFF 2008). Set in 1973 in the last days of Salvador Allende's presidency, the film stars Tony Manero lead Alfredo Castro (here sporting a mane of long, whitish-blond hair) as Mario, an autopsy recorder who frequents a seedy burlesque hall where his neighbor, Nancy, is one of the dancers. Infatuated from afar, he finally works up the courage to visit her dressing room, and finds his affections if not exactly returned, at least entertained. As Mario haphazardly tries to woo Nancy away from her Popular Front boyfriend, Chile descends into chaos around them, until Mario finds himself an unwitting first-person witness to the grim face of violent social change."

Aside from new work from the masters (Godard, Weerasethakul, Oliveira), looking lustily at LE QUATTRO VOLTE and MEEK'S CUTOFF. #nyffMon Aug 16 15:29:49 via web

Raúl Ruiz's Mysteries of Lisbon. Premiering in Toronto. From the Film Society: "In 19th century Lisbon, a teenage boy raised by priests learns the secret of his aristocratic lineage; a French heiress (the wonderful Clotilde Hesme) seeks revenge against the man who sullied her honor; and a kindly padre changes identities as it suits the occasion. These are among the characters who populate Raul Ruiz's breathtaking adaptation of one of the masterworks of Portuguese literature: Camilo Castelo Branco's Mysteries of Lisbon. Nothing — and nobody — is first as it/he appears in this intoxicating spiral of stories within stories within stories, filmed by Ruiz with gorgeous period design, a fluid, pirouetting camera, and a peerless French and Portuguese cast. A companion film to his magnificent Proust adaptation, Time Regained (NYFF 1999), Mysteries of Lisbon is the crowning achievement of a great director's career."

Sebastián Silva's Old Cats. World premiere. From the Film Society: "With last year's The Maid (ND/NF 2009) and now with Old Cats, Sebastián Silva has emerged as one of cinema's greatest young talents, mining the hilarity and horror of the nuclear family. Claudia Celedón and Catalina Saavedra — who, respectively, played la señora and the titular domestic servant in The Maid — star as girlfriends Rosario and Hugo, hapless schemers always borrowing money from Isadora and Enrique, Rosario's ailing mother and stepfather. When Isadora refuses to be swindled once again by her daughter, Rosario erupts in tears and recriminations, her hysterics setting off several outrageously funny scenes. A master of tone shifts, Silva seamlessly transforms his family farce into a weightier look at the responsibilities that parents and their offspring alike must face." Ioncinema has a few images.

Update, 8/18: NYFF Selection Committee member Todd McCarthy at indieWIRE: "There were numerous cases in which all five of us agreed (much more often on a films worthlessness than on its quality), but quite a few more where it was four to one or three to two. Sometimes, of course, we were mixed or positive with reservations, and we would generally put these titles on a back burner for further consideration, once we'd seen what else was out there; you don't want to book your festival so completely that there's no room for entries viewed on the final day. In this department, the gorilla in the room was Terrence Malick's The Tree of Life.... All through our recent two weeks in the dark, we received periodic updates and tentative promises about the imminent arrival of the film for us to view; even well into the second week we were still being thus tantalized. Finally, of course, came word that Malick was still not done and it now seems clear the picture will not be opening this year. I can't prove it, of course, and he's supposedly set to start shooting a new film in Oklahoma in October, but I'm convinced we won't be seeing The Tree of Life until, at the earliest, the 2011 Cannes Film Festival."