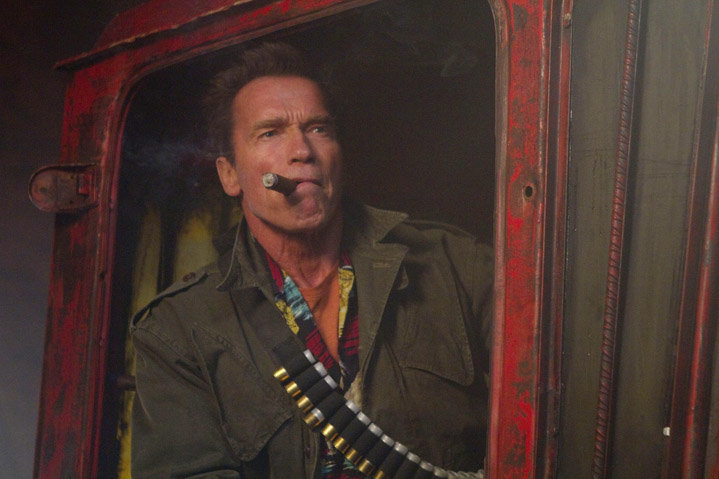 Sylvester Stallone's The Expendables was a sloppy, corny movie that never felt less than genuine; like a teenager's poetry, it was clunky and derivative, but also heartfelt—﻿or, more accurately, gut-felt, considering its focus on a certain type of lone, tough-guy, no-tears sadness. Its world—﻿﻿embodied in its standout scene, a gorgeously rambling Mickey Rourke monologue—was romantic but pessimistic, ridiculous but also dead-serious. It wasn't so much an action movie as an ensemble piece (or, at the very least, an attempt at an ensemble piece) about the emotional lives of a bunch of cartoon badasses.

The Expendables 2 is, in many ways, a "better-made" action movie: handsome, more cohesive, better balanced and paced.﻿ The jokes are still lame, the special effects are still sub-par, and Arnold Schwarzenegger's role still consists entirely of looking shriveled and reciting bad self-referential asides (his non-chemistry with Stallone suggests an exhausted vaudeville duo doing a decades-old routine for booze money)—﻿but at least the film has a palpable momentum, proceeding at a quick clip and laying out and completing goals along the way. In lieu of the first film's goofy meandering from tangent to tangent, there's a rapid succession of plot points: a downed Chinese aircraft leads to a map which leads to villain (actually named "Vilain," and played by a predictably underused Jean-Claude Van Damme) who leads to several too-short set-pieces which lead to a Chuck Norris cameo which leads to a quick final showdown. The movie is lean and consistent—﻿﻿and that, surprisingly enough, is its major flaw.

Taking over directorial duties from Stallone, Simon West—﻿﻿who debuted with the Bruckheimer blockbuster par excellence Con Air (1997) but has since settled into a career as capable (albeit not terribly interesting)﻿ action journeyman﻿—does solid work. Visually, he's a more classical director than Stallone, with a good sense for how to stage action in a widescreen frame (despite the fact that he's directed many action movies, Stallone is more of a drama director, and his action scenes tend to be a tad incoherent). The opening number—﻿﻿﻿﻿a hyper-violent rescue operation that involves modified trucks and airboats—﻿﻿﻿﻿﻿is smartly-crafted, though not especially memorable (regardless of his eye for framing, West lacks the punchy kinetic sensibility of contemporaries like John Hyams or Joe Carnahan). It's solid work—﻿﻿﻿and that's about it. The charm of The Expendables, though, lay in how laid-back it felt, casually moving from conscious self-parody to straight-up gory action to meathead poetry and back. Take that away, and what you're left with is a generic action flick where aging stars send up their on- and off-screen personas.