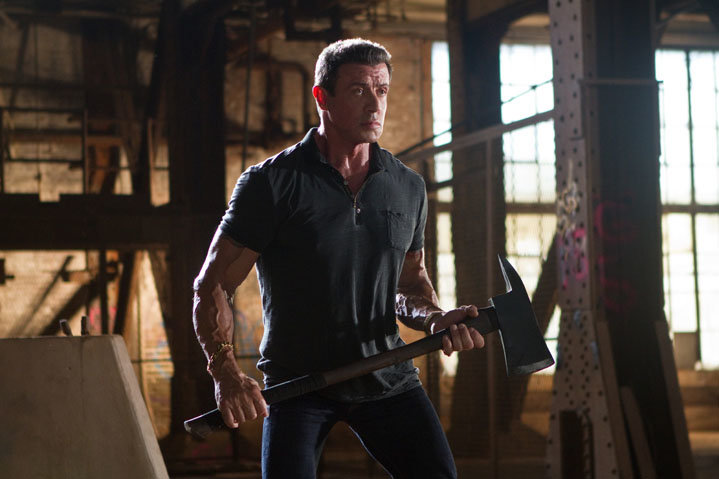 As narrative, Bullet to the Head is amateurish﻿﻿. ﻿Villains awkwardly explain their plans for the benefit of the audience﻿. Characterization is non-existent. Scenes are bridged by lame iMovie-style filter effects. Poorly Photoshopped stills are used to illustrate "backstory." The movie clunks along with no sense of dramatic tension or scope.

And yet in terms of how it handles light, movement, texture, and space, ﻿it's clearly the work of a master. Directing his first feature since Undisputed (2002), Walter Hill invests the film with all the hallmarks of his abstracted macho style: blunt comic-strip compositions; telephoto lenses that turn foreground objects into translucent smears on the frame; figures lit chiaroscuro against backdrops of neon; reflections rippling on water. Bullet in the Head may have a shaky sense of structure and plot, but ﻿﻿﻿it has a firm grip on action movie form.

Sylvester Stallone—﻿﻿looking more than a little like a gorilla taught to walk upright﻿—﻿﻿﻿plays a hitman who teams up with a cop (Sung Kang) to take down the New Orleans real estate developers who killed his partner. The two trade 1980s-style ethnic quips, consult Kang's smartphone, and eventually find all of the bad guys conveniently hanging out in a disused factory. It's the weakest kind of direct-to-video material—﻿an impression reinforced by the presence of DTV staple Christian Slater.

If Hill's style doesn't rescue the movie, it at least elevates it. Surfaces (marble, metal, water, etc.) are given tactile presence—﻿﻿which goes a long way in a film where people are constantly getting thrown into things. The foley work and sound design are typically expressive; every thud and smack is so concrete that you can hear the texture of the surface.

What ultimately makes the movie frustrating, though, is the fact that Hill is more than a mere formalist; his style has always been balanced by an ability to turn his characters into credible mythic figures (see: Hard Times, The Driver, The Warriors, Last Man Standing, and the fairy-tale-like Johnny Handsome, as well as more self-conscious works like Crossroads, Geronimo: An American Legend, and Streets of Fire). The characters of Bullet to the Head, though, are simply too generic and featureless; they lack the undercurrent of myth that feeds Hill's most imaginative films.

There are glimpses of possibility, however—﻿﻿﻿if not in the characters, then in the actors' bodies. Stallone's body—﻿﻿a 'roided-up, tattooed testament to one rich old man's vanity—is the very image of obsolescence; his unbalanced build (over-sized torso and arms, tiny little legs) and stiff gait suggest that he might topple over at any moment. But since Stallone and Kang mostly interact while sitting down (like many later Stallone films, Bullet to the Head attempts to hide the actor's below-average height), their bodies are never effectively counterposed. What could be a suggestive detail instead becomes another missed opportunity.

The movie is, in fact, chock full of unpursued or elided ideas: the leads' sense of professional duty, Stallone's relationship to his work, Kang's attraction to Stallone's daughter, the role of political corruption in the plot. At times it feels as though the whole thing has been scrubbed clean of anything resembling theme.

Still, Bullet to the Head is far from a failure. The chemistry between Kang and Stallone often works. New Orleans imagery—﻿﻿﻿while lacking the mythopoeic punch of Johnny Handsome—﻿﻿﻿﻿is effectively used.  The action scenes are brisk and formally assured; a bathhouse confrontation—﻿﻿﻿with light, reflected by pool water, dancing across the ceiling—﻿﻿﻿﻿and a climactic axe fight showcase Hill's talents as an action stylist. However, this is ultimately little more than a master's hackwork.

As Luck Would Have It presents a slicked-up variant of director Álex de la Iglesia’s usual cartoony style. Energetically acted and sure-footed, the movie doesn’t plod and never feels impersonal; however, it rarely pops the way previous de la Iglesia features have. It’s a letdown—albeit one that’s still got a lot going for it.

As Luck Would Have It is﻿ a Wilderesque comedy about a down-on-his-luck ad man (José Mota) who becomes the center of a national TV news story after getting an iron rod stuck in his skull. This set-up is essentially an extended visual gag: the media circus plays out in Cartagena's 2000-year-old Roman amphitheater, with the ad man—who snuck into the ruins while looking for the hotel where he spent his honeymoon—impaled on the stage. On-lookers sit in the amphitheater's stands. Hurrying reporters trip and tumble down its stone steps. ﻿

The ad man, in turn, becomes a Looney Tunes character: greedy, easily fooled, motivated largely by self-interest.  To him, the accident is a lucky break—an opportunity to get rich. Using his cellphone, he attempts to orchestrate his own human interest story, going so far as to hire an agent (Fernando Tejero) to negotiate endorsements and exclusive interview rights. His motives are at first altruistic (money means a college education for his kids and a secure future for his family), but before long they give way to delusions of grandeur. Like Wile E. Coyote, he's so narrow-minded and so certain to fail that he inadvertently becomes sympathetic. ﻿

Though the screenplay wasn't written by either de la Iglesia or his regular collaborator Jorge Guerricaechevarría﻿—﻿a first—it seems tailor-made for de la Iglesia's sensibilities. All of his obsessions are covered: intentionally two-dimensional characterizations, oddball outcasts (here represented by the ad man's Goth son), a selfish protagonist who gets maimed partway through the film.

But despite the presence all of these familiar elements, the movie feels sanded down. Without de la Iglesia's rough edges—﻿﻿his gorehound taste for graphic violence, his occasional misanthropy—﻿﻿﻿the film can't really work as a satire; instead, it has to make do with being a well-made, eccentric comic melodrama—﻿﻿﻿﻿which, frankly, isn't all that bad.﻿