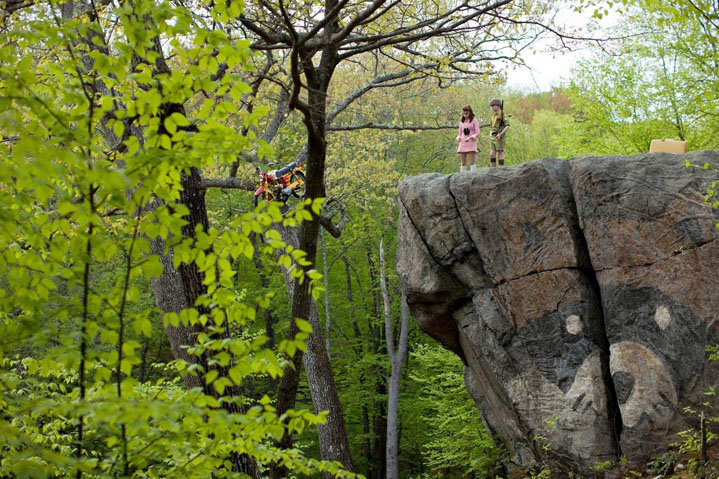 Dollhouses within dollhouses: the island of New Penzance, the setting of Wes Anderson's new movie, which opened Cannes this year and will be released in the US this Friday, is a miniature of the director's whole body of work—isolated, insular, steeped in mid-century nostalgia, populated by kids who do adult things and adults who behave like children. The place names—﻿"Yeoman Lane," "Roman's Ruins"—﻿﻿reference the names of Anderson's collaborators. Middle-school-age girls are hip to Françoise Hardy﻿ and everyone is impeccably dressed.

Anderson, it seems, has finally and thoroughly gone up his own ass—﻿﻿and yet the film happens to be one of his best and most inviting works. Moonrise Kingdom—﻿﻿﻿deftly orchestrated but deliberately uncomplicated—﻿﻿﻿is easily Anderson's sweetest, most sincere movie, and the only one, aside from Rushmore, where the director's stylistic and thematic conceits are perfectly in sync. It may be the twee-est, archest film of a director frequently accused of tweeness and archness﻿, and it may veer closer than any of Anderson's other films to outright kitsch (e.g. the brownish, Jean-Pierre Jeunet-style color grading)—﻿﻿﻿﻿but there is a grace and a beauty to the way all of its fussed-over parts click together.

Set mostly from September 2nd to September 5th, 1965—﻿﻿﻿﻿with a few skips back to the preceding year and an epilogue—﻿﻿﻿﻿﻿Moonrise Kingdom begins by laying out the set-up: two troubled, friendless kids (Jared Gilman, Kara Hayward) have run away, prompting the people of New Penzance to band together.﻿ Anderson establishes the situation in brisk, efficient, funny ways, beginning with the befuddled adults, then going back to the kids' first meeting. Visually, the film is knick-knack-drawer-compact; working in Super 16mm and the 1.85 aspect ratio, instead of his usual anamorphic 35mm, Anderson keeps the action and blocking simple. The spaces (tents, narrow churches and chapels, cramped rooms) are smaller, and the close-ups seem bigger.

The film moves like a creation myth: the kids fight off hostiles in a forest, create a private Utopia on a pebbly inlet, are married in a "non-legally-binding" ceremony by a scout troop quartermaster (Jason Schwartzman), overcome a nameless blue-clad evil (Tilda Swinton), and are finally able to start anew in a world swept clean by a massive thunderstorm. Like The Life Aquatic's big open sea, New Penzance seems like a dangerous, primitive world of infinite possibility; there are no paved roads, only one long-distance phone, and children roam the woods armed with bows and spiked clubs.﻿ But the island is also sealed off, physically and thematically—﻿﻿﻿﻿﻿﻿a little bottled universe where everything is inevitable.

In lieu of the usual Anderson pop gem soundtrack, Moonrise Kingdom is set mostly to the music of Benjamin Britten, which serves as a tone-setter, plot point (the kids meet during performance of the composer's "opera for amateurs" Noye's Fludde, the plot of which foreshadows Moonrise's ending)﻿, and perhaps even a statement of intent.

Lateral camera movements,﻿ color-coded production design, a keen sense of comic and dramatic timing predicated on measured pauses—﻿﻿﻿﻿﻿﻿﻿﻿nothing in Anderson's work is accidental. It can't be by chance, then, that the film opens with a recording of Britten's "The Young Person's Guide to the Orchestra,"﻿ which uses a catchy Henry Purcell rondeau to explain how the different sections of a classical orchestra work together.﻿﻿ The piece matches not only Moonrise Kingdom's plot—﻿﻿﻿﻿﻿﻿﻿which inverts Anderson's usual family-members-being-dicks-to-each-other routine in favor of a community trying to behave decently to achieve a common goal—﻿﻿﻿﻿﻿﻿﻿﻿but also its structure. Interpolated throughout the film are maps, cutaway sets, and a nattily-dressed narrator (Bob Balaban) that, like the narration in "The Young Person's Guide to the Orchestra," explain how the movie's fictional geography, character dynamics, and timeframe all figure in the story.﻿ Anderson's movie is a musical, composed work about how all of the instruments—﻿﻿﻿﻿﻿﻿﻿﻿character, plot, setting—﻿﻿﻿﻿﻿﻿﻿﻿﻿play together; what it achieves is a rare harmony of form, tone, and subject.﻿